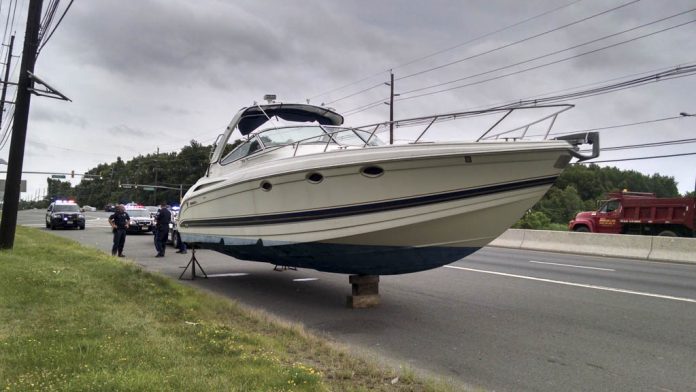 SOUTH BRUNSWICK – Police uncovered the mystery behind a 37-foot boat that was found on the side of Route 1 on July 6.

The boat had reportedly recently been sold and was in the process of being transported from Mamaroneck, New York, to Maryland by Otter Creek Marina and Boat Transportation, according to information provided by the South Brunswick Police Department.

The truck transporting the boat reportedly experienced mechanical problems and the driver, a 49-year-old male from Forrest Hills, Maryland, off loaded the boat on the shoulder of the highway around 1:30 p.m., police said.

The driver left the boat on blocks and reportedly headed to Maryland to get a new trailer. Just after 8 p.m., police were able to remove the boat from the highway by George’s Garage and Towing in Cranbury.

The driver was issued summonses for failure to notify police of a disabled or abandoned vehicle and for obstructing the passage of vehicles.

There was one minor car crash from drivers watching the boat as it was on the highway, police said.

1 of 1
Share
Facebook
Twitter
Email
Print
Previous articleOfficials, clergy members pledge to Stand Up for the Other
Next articlePaving expected on Prospect Plains Road in Monroe on July 12