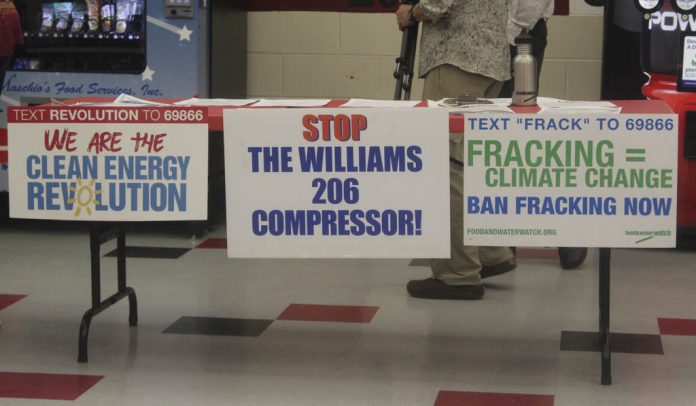 KEYPORT —Armed with powerpoint slides, intervention letters and refreshments, the NY/NJ Baykeeper and Food and Water Watch served as the host to a public information meeting to inform locals about the impact the proposed Williams Transco Pipeline will have on Raritan Bay.

The Williams Transco Pipeline is also known as the Northeast Supply Enhancement Project, according to information provided by the NY/NJ Baykeeper and Food and Water Watch.

More than 40 residents of Sayreville, Keyport, Old Bridge and New York attended the meeting to learn more about the proposed pipeline, on July 13, at the Keyport High School’s Cafeteria.

A panel of four speakers elaborated on the economic, environmental and health impacts of the proposed pipeline. Speakers included: Debbie Mans, executive director of the NY/NJ Baykeeper, Junior Romero, a central New Jersey organizer for Food and Water Watch, Barbara Cuthbert, a member of the Franklin Township Taskforce Steering Committee, and Patty Cronheim, a outreach coordinator for Rethink Energy NJ.

Williams Company is seeking approval from the Federal Energy Regulatory Commission (FERC) to build the Northeast Supply Enhancement project, an expansion of the company’s existing Transcontinental pipeline. It would include multiple compressor station expansions, a new compressor station in Franklin Township, and a new pipeline under Raritan Bay to carry fracked gas from Pennsylvania to New York City, according to information provided by ReThink Energy NJ.

Mans said that the bays are the nurseries of the ocean and that if the pipeline is built it will disrupt Raritan Bay’s recreational value, its growing commercial clamming industry and have negative effects the animals who inhabit the bay.

The numerous species that reside in Raritan Bay are going to be disturbed after and during the construction of the pipeline, Mans said. A few of these species include: seals, whales, dolphins, porpoises, clams, horseshoe crabs, fish, and other habitants, according to Mans.

Mans said that the vibrations caused by the construction devices used to drill and build the pipeline underneath the bay will cause noise pollution that will likely cause the bay’s inhabitants to seek refuge elsewhere.

“New York’s appetite for natural gas is increasing as consumers continue to phase out the use of heavy fuel oils. In April 2015, New York City Mayor Bill de Blasio announced sweeping goals to curb city emissions 80 percent by 2050, which includes phasing out the use of No. 4 fuel oil by 2030. The Northeast Supply Enhancement project creates energy infrastructure to provide access to important natural supply necessary to help meet these aggressive clean air goals,” Williams spokesperson Chris Stockton said. “With natural gas’ relatively lower-carbon emissions, compared to higher-carbon fuel sources, this project has the potential to displace up to 15.6 million tons of CO2, which is like removing three million passenger cars from roadways, annually.”

The project will have no benefit to New Jersey and the delivered gas would service only New York, according to Mans.

“At the federal level [the proposed pipeline project] has been filed with FERC and so that is a lot of documents that they are submitting and people can file for an intervenor status which just means that when you submit a comment they have to respond and listen to you. At the state level we are actually in an open public comment period right now on two permits [which is a] fresh wetlands permit and a flood hazard permit and these are land use permits that come out of the state and so people can submit comments now on those permits,” Mans said.

The project is proposed to be completed by the end of 2019, according to information provided by NY/NJ Baykeeper and Food and Water Watch.

The project will also require offshore horizontal directional drilling of more than 70 feet below Raritan Bay’s current bottom. The construction of the offshore pipeline will take place for 12 months depending on the weather, according to Cuthbert.

“This was the first time we had an event here at the Bayshore, part of this project will be built in and as you can see here the turnout was awesome. We have only done three weeks of outreach and there is an extreme amount of interest in this project, especially how it would effect the Bayshore and the Raritan Bay. So the reason we partnered with NY/NJ Baykeeper was [because] we wanted to tie in the effect the tourism and the recreational activities here in the bay and also that people could see the connect between these projects and fossil fuel infrastructure in New Jersey and around the country,” Romero said

For more information about Food and Water Watch visit www.foodandwaterwatch.org/.