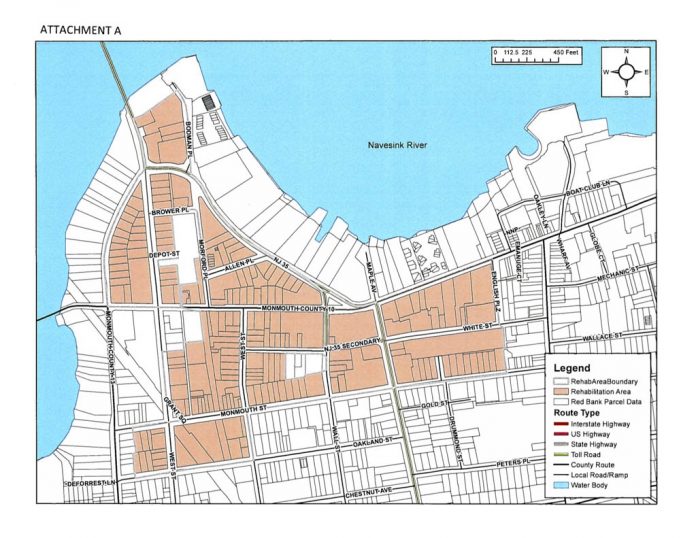 RED BANK The Borough Council approved a resolution designating portions of the borough as an Area In Need of Rehabilitation under state law.

According to a map provided by the borough, the area is bordered by the Navesink River on the north, English Plaza on the east, parts of Oakland Street and Monmouth Street to the south, and part of West Street to the west.

About a year ago, the borough began looking into areas to determine a need for rehabilitation, according to Director of Planning and Zoning Glenn Carter. The council approved the resolution during a July 26 meeting.

The area in need of rehabilitation designation is the only one of the three that does not allow either condemnation or long-term tax abatements. A program of rehabilitation, as defined by state law, may be expected to prevent deterioration and promote the overall development of the community, according to the agenda.

The borough’s next step is going to be to prepare a redevelopment plan for all or any part of the area, according to Carter.

Lt. Michael Frazee was promoted to captain, Sgt. Juan Sardo and Sgt. Wendy Samis was were promoted to lieutenant, and Detective Robert Campanella and Patrolman Matthew Ehrenreich were both promoted to sergeant.

“I think it really sets up our leadership team even better than it was. We have been down for about six months due to some retirements, so this fills all the ranks and gets us back to where we should be and makes us run more efficiently, and its sets up the future of the department which is always important for us to keep the progression going [and] get people in the right spots,” Chief of Police Darren McConnell said.

Menna also presented two checks each worth $10,000 from the proceeds earned at this year’s annual Red Bank Mayor’s Charity Ball.