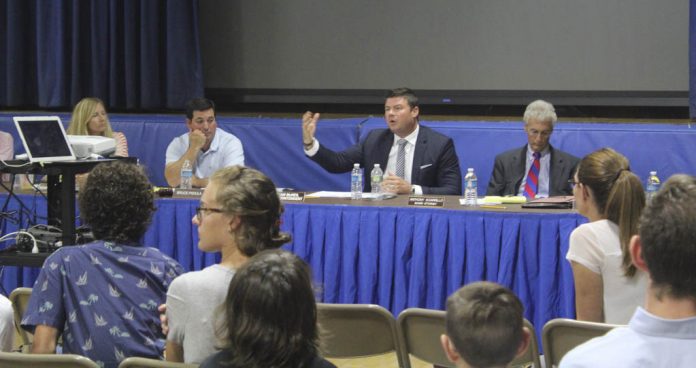 FAIR HAVEN Teachers, parents and former students banded together to voice their disapproval over the school district cutting music programs for the upcoming academic year.

Students at Knollwood Middle School and Viola L. Sickles Elementary School will have instrumental music offerings that will include Orchestra, Big Band, and Jazz Big Band, according to Superintendent Sean McNeil.

“The smaller Jazz Combos that the students practice may be discontinued for younger students due to the new schedule and sections we are having our band director take on, but we are hopeful that we can still offer these valuable Jazz Combos to our eighth grade students once we see how the final schedules come together,” McNeil said.

“We had a part time music teacher resign on June 30 that we decided not to replace. The music teacher had been pursuing full time jobs in other districts and was fortunate enough to secure one. When we received this news we decided to look closely at the schedules and felt that we could maintain much of our current robust music program with the remaining three full time positions that the district continues to employ,” McNeil said.

More than 20 residents expressed their opposition and concerns toward the school district’s decision to discontinuing certain music programs on Aug. 23, during the Board of Education’s monthly meeting at the Knollwood Middle School gymnasium.

Before allowing residents to voice their concerns, McNeil gave a slide presentation explaining the board’s reasons behind the music program cuts.

“We did not face a deficit for the current 2017-2018 school year, but did find ourselves in the tightest budget we have had in over 20 years. The budget approved by the district in April did include the part time music teacher for this school year, but some mandated previously un-budgeted positions became necessary and came to our attention toward the end of the year,” McNeil said. “When the part time teacher informed of us of her resignation, we decided to address the unfunded positions with this attrition in order to remain consistent with the budget already approved by our Board of Education.”
The school has had to make cuts in technology, its leadership team, building supply budgets, professional development budget, and reducing the music staff from 3.5 music position to three full-time music teachers, according to McNeil.
McNeil said that cutting certain music programs is not taken lightly.
Despite possibly facing a tight deficit in the upcoming school budget, McNeil highlighted varies accomplishments the administration has made that include: redesigning and implementing an entirely new curriculum for grades kindergarten to eighth, increased instructional time for math and science, departmentalized science for fourth and fifth grade, and the district’s curriculum now current and compliant with New Jersey Student Learning Standards mandate, according to McNeil.
Music teacher Sara Marino said that she has been a music teacher at Knollwood School since 2002.
Marino said that by cutting the music programs students “learn that the things into which they put effort and excel are not as valued as other things and eventually they start to believe that they are not ‘good’ at things that matter. I do not think that this is the message the board intends to send and I do believe that the board values the arts. I therefore hope that the board will consider that cutting [the] part-time music position is a bigger deal maybe than was understood when it was proposed as a solution to meet staffing needs in other areas and that it means more than $3,700 to children in this community.”
“The time, attention and expertise of a highly qualified music educator who has the time to spend [the students] is priceless. If we have financial problems we obviously should address them but in ways that students do not perceive so readily and if we are approaching a district financial crisis we should be honest about what things cost and what it will take to fund them…Musical programs do not typically recover from cuts instead just as growth fosters growth fosters growth hard times in music programs foster harder times,” Marino said.
Resident Marianne Pane said that because her husband is an administrator for a school she understands how difficult it is for a school to balance its budget and to make cuts.
“I stand in solidarity with my fellow Fair Haven-ites, former and current, and students…Music can help increase an IQ, it helps with disabilities, it can assist with cognitive thinking so on and so forth. It is something that as been provided to our students so that everybody can find a place..,” Pane said.
High school student Jenna Unger said that when she was in seventh grade she was diagnosed with clinical depression and generalized anxiety disorder and that she hated going to school.
“The music program changed all of that. I have been playing the flute since I was in the fifth grade..and it gave me the motivation to get up out of bed, make friends, [and] try my hardest in everything I took on. I am now going to be a junior in high school, I finally joined marching band after everyone was yelling at me to join marching band and I can tell you how much effort Ms. Marino and how much love she puts into her job [and] in everything that she does,” Jenna said. “I met kids every year, upcoming freshmen, upcoming eighth graders, and you can see that sometimes they are not happy in the middle school scene and I relate to that because I wasn’t either…by cutting the programs as you are proposing to do so it would break them, it would break a lot of kids and I know that coming from a long line of teachers and educators that is not what a teacher or educator or a board would want to do..”
McNeil said that he felt the parents, former students, teachers, and general community members were incredibly articulate and passionate about their love of these programs.
“I wish all of the decisions we make could be made in a vacuum and decided only on their own merits, but the reality is that we have reached a moment in our district’s history that requires all of us to do a little more with a little less in the name of giving all of our students the educational experience they deserve. Navigating the district through the upcoming projected deficits will be a challenge for years to come, but one that I know our community will join together to overcome,” McNeil said.
For more information visit www.fairhaven.edu/fh/District/Board%20of%20Education/.
Contact Vashti Harris at vharris@newspapermediagroup.com.
1 of 4
Share
Facebook
Twitter
Email
Print
Previous articleResidential units not approved for former C-Town site in South Amboy
Next articlePRINCETON: Mayor Lempert blasts Trump administration’s decision to end immigrant program