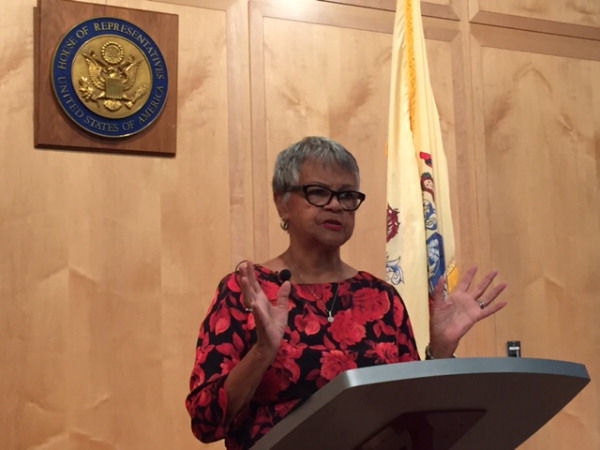 By Philip Sean Curran, Staff Writer
A member of the House of Representatives from Mercer County sounded receptive to Democratic leaders trying to reach a deal with President Donald Trump to protect some 800,000 illegal immigrants brought to the country when they were children.
Senate Minority Leader Sen. Chuck Schumer of New York and House Minority Leader Rep. Nancy Pelosi of California emerged last week from a dinner with the president issuing a statement saying they had agreed “to enshrine the protections of (the Deferred Action for Childhood Arrivals program) into law quickly” and also agreed on border security measures, but not on the border wall that the President had campaigned on.
Rep. Bonnie Watson Coleman, D-12, through her spokeswoman, credited Pelosi and Schumer for their “true leadership and efforts to find a bipartisan agreement and make a realistic effort for immigration reform.”
"While there are no specific details that accompany said agreement she will reserve judgment until a bill hits the House floor,” said spokeswoman Kirsten Allen. “The Congresswoman definitely supports the DREAM Act and the takeaways that Leaders Schumer and Pelosi outlined: permanent solution to protect DREAMERs, an increased funding for border security (technology, personnel, etc.), but no funding for ill conceived border wall.”
The DREAM Act refers to a Congressional attempt to provide a path to citizenship for people who came to the country illegally as young people. A new version of that bill was introduced this year in the Senate by Schumer and Sens. Jeff Flake, R-Arizona, and Lindsey Graham, R-S.C.
The DACA program was started by President Barack Obama in 2012, designed for people under 31 years old as of June 15 of that year, came to the United States before they were 16 and met other criteria, including living in the country illegally. But the Trump administration announced earlier this month that it would end DACA, with Congress given time to find a solution.
Mayor Liz Lempert had criticized the Trump administration for its “cruel decision,” in words echoing President Obama other critics who also called the action cruel. Princeton is home to a sizable population of illegal immigrants, largely from Central America. In a Sept.5 statement, she said Princeton “recognizes that all our residents—regardless of immigration status—make vital contributions to the success of our town.”
“I think there needs to be some system in place where they can continue to be productive members of the country,” Mayor Lempert said Sept.14 by phone in response to the DACA announcement by Schumer and Pelosi. “And, ultimately, I think there should be a pathway to citizenship.”
In terms of finding a solution, she said she supported “Congress trying to attend to this, it’s long overdue.”
“There does need to be something in place that’s fair and morally just, too,” she said.
For its part, Princeton University had urged Congress to protect DACA recipients and provide them citizenship. The university had no comment last week on the outcome of the Trump dinner with Pelosi and Schumer.
Watson Coleman sought to show she is willing to cross the aisle and work with Republicans, even though she has criticized President Trump and skipped his inauguration.
“Congresswoman Watson Coleman is clear that she will work with this President and House GOP to advance shared priorities like creating jobs, improving infrastructure and recovering from Harvey and Irma,‎" Allen said.
President Trump last week went on Twitter to say “no deal” had been reached between him and the Democratic leadership.
“Massive border security would have to be agreed to in exchange for consent,” he wrote.