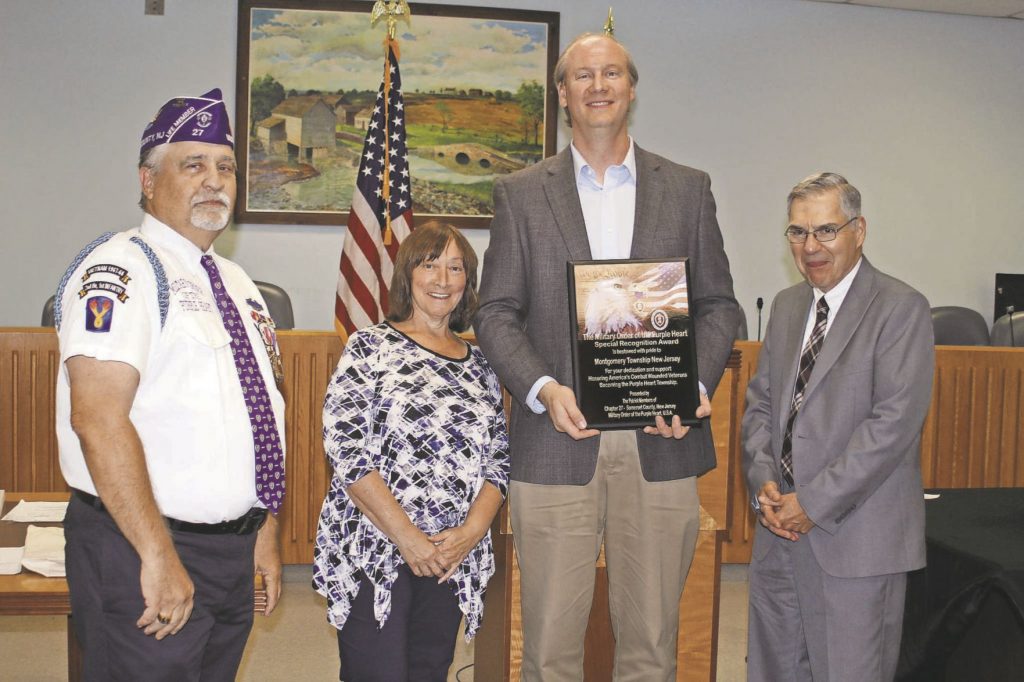 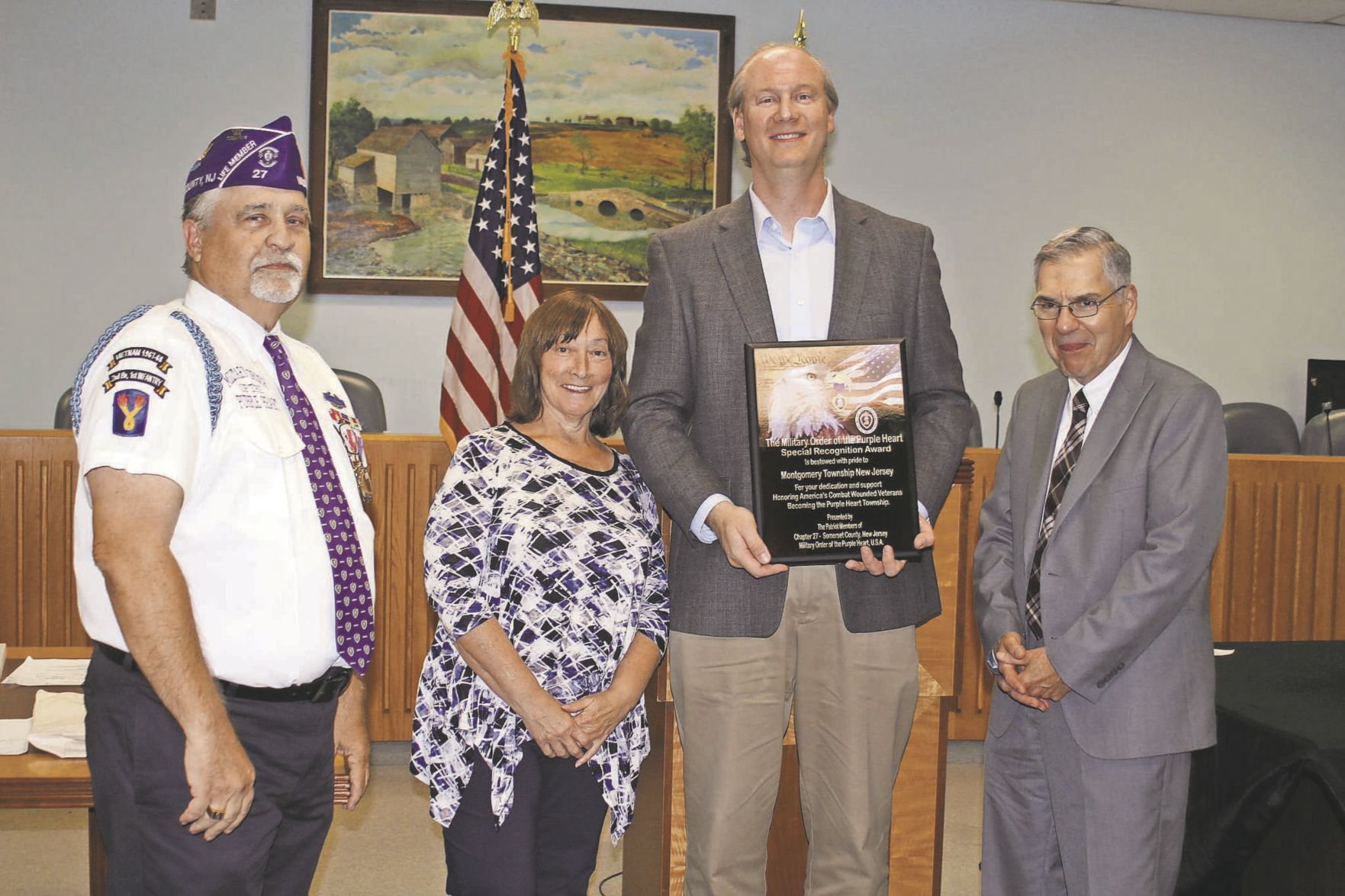 By Lea Kahn, Staff Writer
In a ceremony tinged with sadness, Montgomery Township joined the ranks of a handful of New Jersey towns that have been designated as Purple Heart communities.
The ceremony, held Tuesday night, marked the 11th anniversary of the combat death of U.S. Army 1st Lt. Ashley Henderson Huff. She graduated from Montgomery High School in 2000.
Mike Maloney of the Montgomery Township Veterans Memorial Committee welcomed the attendees to the ceremony in the courtroom at the Municipal Building, noting that "we gather under the watchful eye of our township’s namesake, General Richard Montgomery."
Gen. Montgomery was killed in action in the American Revolutionary War.
"This evening, as we celebrate something very special – becoming a Purple Heart community – we must also honor and remember those who earned the military honor," Maloney said.
"The Purple Heart is given in two circumstances – to those wounded in action, and to those killed in action. One will see and hold the Purple Heart, and (the other) one will never see or hold the Purple Heart," Maloney said.
"This evening, we honor and remember both. We honor and remember the almost 2 million Purple Heart recipients, here and across our great nation. We honor and remember our own – those who never saw and never held the Purple Heart," he said.
Maloney read off a list of names of Montgomery Township residents who were killed in action, starting with John A. Cray and James Cray, who died in the Civil War.
Also, Arthur S. Dixon, who was killed in World War I, and Charles Rospopa, George L. Brown and Michael Malko, who were killed in World War II.
U.S. Army Specialist 4th Class Stephen H. Warner was killed in action during the Vietnam War, and Lt. Huff died in Operation Iraqi Freedom in Mosul, Iraq. She was awarded the Purple Heart medal posthumously.
The Purple Heart award grew out of the Badge of Military Merit, which was established by Gen. George Washington in 1782 to honor soldiers who performed a "meritorious action." It was not given out again after the Revolutionary War.
The medal was revived and renamed the Purple Heart in 1932, on the 200th anniversary of Gen. Washington’s birth, Ted Dima told the attendees. He is the senior vice commander of Somerset County Chapter 27 of the Military Order of the Purple Heart.
"You earn the Purple Heart. As with any other military honor, you earn it. You don’t win it," Dima said.
Dima presented a plaque, acknowledging Montgomery Township’s designation as a Purple Heart community, to Mayor Ed Trzaska. The mayor called it a "proud moment" for the township, adding that is an honor and a privilege to be named a Purple Heart community.
Then, U.S. Army Brigadier Gen. Michael Cunniff, who is the Adjutant General of the New Jersey Army and Air National Guard, awarded the New Jersey Distinguished Service Medal to SPC. Warner and Lt. Huff, posthumously. It is the state’s highest military honor.
"What we are doing here tonight is more important, and more necessary, than ever," Gen. Cunniff said.
"It is important because we are recognizing Americans who are the very definition of heroes. They put the needs of this country above their own and paid a price in blood, or their lives," Gen. Cuniff said.
It is necessary because "we are a nation at war, yet a country where fewer than one percent of our population serves in the military," he said, adding that the township’s designation as a Purple Heart community raises awareness of the sacrifices that military service members have made.
"It has been said that a nation sends its best to war, and it was certainly true (of SPC. Warner and Lt. Huff). They believed that serving the greatest nation on earth meant being willing to give their lives to protect it, if necessary," Gen. Cunniff said.
Lt. Huff was commissioned as a U.S. Army officer through the University of Georgia’s Army Reserve Officer Training Corp (ROTC). She was a member of the military police and served in Iraq. She was killed when a suicide bomber detonated explosives near the patrol she was leading on Sept. 19, 2006.
"After her death, her husband, Brian Huff, said she had been the bravest person he had ever known. Bravery is also a word that comes up when you read accounts written by people who knew Stephen Warner," he said.
SPC. Warner grew up in Montgomery Township and graduated from Princeton High School in 1964. He graduated from Gettysburg College in 1968, and was in his first year at Yale Law School when he was drafted in 1969.
He was assigned to the U.S. Army’s 7th Public Information Detachment, where he wrote articles for hometown newspapers and radio stations about local soldiers in the field.
He was killed when the armored personnel carrier, or "track," on which he was riding was ambushed in February 1971. He had given up a chance for a rest-and-relaxation break to be with the soldiers.
"They (SPC. Warner and Lt. Huff) were among our nation’s best. They were among Montgomery Township’s best, and everyone here tonight is playing an important part in keep their memories alive," Gen. Cunniff said.
A plaque in Lt. Huff’s honor was accepted by Superintendent of Schools Nancy Gartenberg, and will be placed on the wall at Montgomery High School.
There are plans to name the main entrance driveway to Montgomery High School as "1st Lt. Ashley Henderson Huff Memorial Drive." A ceremony may be held later.
Wrapping up the ceremony, Maloney of the Montgomery Township Veterans Memorial Committee pointed to the POW/MIA Chair of Honor that had been set up on a pedestal in the front of the meeting room.
"As of this evening, 82,476 service members are officially unaccounted for. We honor and remember the presumed 82,476 Purple Heart medals – never to be seen or touched," Maloney said.