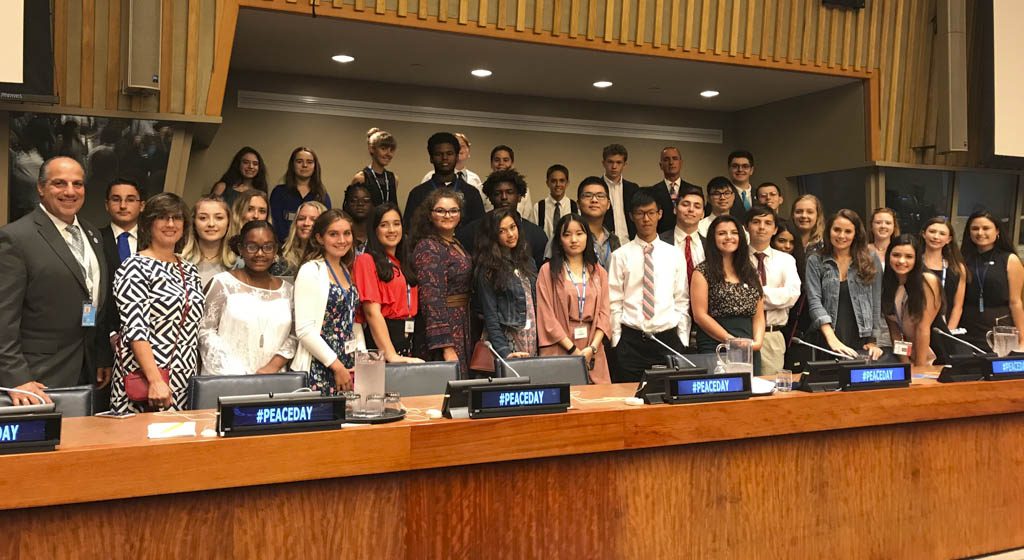 The theme of the 2017 International Day of Peace Conference was “Together for Peace: Respect, Safety and Dignity for All” and focused on engaging and mobilizing people throughout the world to show support for refugees and migrants, according to a prepared statement.

The Emerging Global Leaders “Education Tool Kit Project” was one of ten projects selected worldwide to present to the United Nations. The project will primarily benefit refugees forced into migration around the world, according to a prepared statement.

The project will implement a two-fold kit that is going to be sent worldwide to refugees. The first part of the kit will contain lesson plans that will be sent to children who have been forced to flee their homes due to war and terrorism. The second part will contain a digital donation portion, specifically in science, math, and English as a second language, according to a prepared statement.

Sophomore Joseph Stanton created the website www.prep4peace.org, which will display the collected lesson plans that are going to be used to help continue the education of the refugee children. The website will also host interactive discussion boards, mentoring programs, and opportunities for all children to be assisted by their peers, according to a prepared statement.

In order to make the website as impactful as possible, the Emerging Global Leaders are asking teachers to donate their lesson plans in science, math, financial literacy, English as a second language, leadership development, western civilization, and European history from grades kindergarten to 12th grade, according to a prepared statement.

This was the third year that the students from the Emerging Global Leaders Program were invited to attend the conference.

“This was a day of promise and infinite possibilities where our students will have the opportunity to launch their project and passion into the world stage. Hopefully this will impact the lives of refugee children whose only desire is stability and the continuation of their educational dreams,” Anthony said in a prepared statement. “Our students understand their role in trying to make that happen and my goal is to provide the platform to create the change they wish to see in the world. All the messages at the conference were to inspire our youth to take action and to make a difference. Their voice matters, but more importantly, they need to get involved and be the difference. There are many organizations throughout the world that will support their cause.”

Students also had the opportunity to engage with students from the UN Consulate in Bogota, Columbia to discuss the end of the fifty year civil war that brought in the rebel FARC combatants into the governmental peace process.

Sophomore Elizabeth Sheridan, Senior Caecilia Altenburg, Senior John DiBrita, and Freshman Camryn Brathwaite were recognized with questions and concerns regarding global developments and the role of youth can play in being a part of the solution. The four students addressed Secretary General Antonio Guterres and the Columbian Consulate with questions and concerns about war, role of politics, and sustainable peace, according to a prepared statement.

“Listening to students my age creating such life changing projects that can make a huge difference in the lives of young refugees was inspiring. It inspired me to start looking at the bigger picture and how I could help those struggling in everyday life,” Senior Madeline Brew said in a prepared statement. “Also, Dr. Jane Goodall’s response to one student’s question really changed my perspective on how to approach certain conversations. Instead of arguing with someone else’s point of view that may be completely wrong, I could tell a story that could make that person think and feel empathy. Instead of participating in the arguing, a heartfelt story could bring peace to one situation and person at a time.”

The students were also able to take part in the ringing of the Peace Bell ritual. This ritual is performed every year on the International Day of Peace.