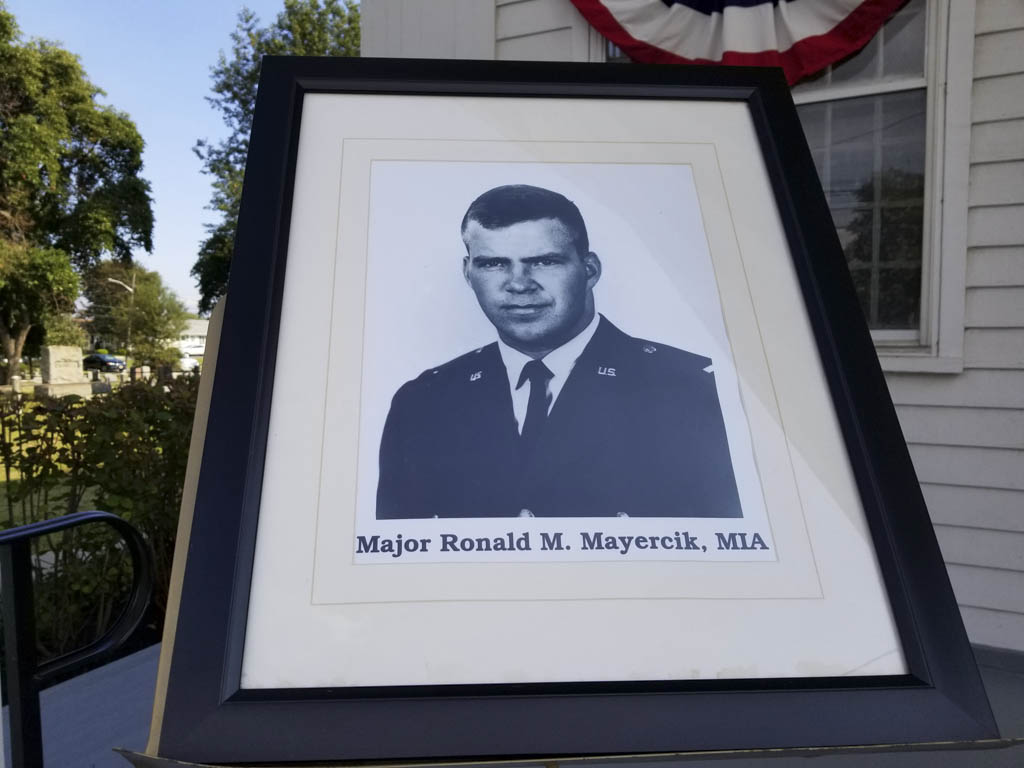 EDISON — For those who knew him, Ronald M. Mayercik led by example and was admired by many.

This year marks 50 years since Mayercik, a captain navigator in the United States Air Force, went missing in action when his F-4 fighter plane crashed in Southeast Asia during the Vietnam War.

Many of his friends attended the annual POW-MIA ceremony held at the St. James Episcopal Church on Woodbridge Avenue in Edison on Sept. 16 and shared their fond memories of their childhood friend.

Thomas Martin said his father was the Reverend James Martin at St. James Church when he heard of Ron and his family, who were steadfast members of the congregation.

Martin said his father took a special liking to Mayercik sharing that his father served in the military during World War II.

“Even then in high school, Ronny exhibited the discipline, the drive, the determination that is so characteristic of those who serve in the military in this country,” he said.

Martin said Mayercik was three years older than him.

“[Ronny] was someone who I certainly looked up to,” he said. “I remember [Ronny] from the Edison High School wrestling team because he was among the first to really [be into] exercise, weightlifting and dieting [which he said were] keys to success.”

He closed with a story that his father shared many times about Mayercik, which fell in line with the memories he had of his friend.

“We used to vacation in Maine every summer and stayed there for a month,” Martin said. “Ronny was enlisted by my father to cut the lawn at the rectory across the street. My father was meticulous about lawn care and upkeep.”

One summer, Martin said, there was a pastoral emergency that caused his father to come back to Edison unbeknownst to anybody in the pre-cell phone days.

“My father drove up the street to the driveway, which had a rise to it,” he said. “[My father] saw a lawn that was freshly cut … and there on the driveway shirtless was Ronny doing push ups. Cutting the lawn was not enough for Ronny, he had to do more, that’s who he was.”

Theodore Latham said he grew up in Edison and went to St. James Church.

“Ronny was someone you could look up to, although he didn’t tell you what to do, but he set an example of where you needed to go,” he said noting that Mayercik was six years older than him.

“[Ronny] knew what his job was, what his vision was and did it very well,” he said. “I tried to figure out who he was and why he was so important at the end of the parade while that old guy [Father Martin] in the collar was following him in the last position.”

Latham said at the time there was a lot of news coverage on Pope Pius XII, who was dying.

“I decided that Ron Mayercik was the Pope, he lifted high the cross,” he said,  adding that Mayercik did the same when he held the American flag as a Boy Scout and during the annual Memorial Day parades.

Salvator Infusino said he and Mayercik graduated from Edison High School together and both of them served in the Civil Air Patrol, which he said inspired his friend to pursue his love of flying and enter the U.S. Air Force.

Infusino said he knew Mayercik as having a strong and upstanding character and spirit.

“[Ronny’s sister] Jan [Buttler] and Jackie Godesky [president of the Hands of Hope Community Soup Kitchen at St. James] are the closest connection that I have left of my friend,” he said. “Ronny was unselfish, brave and loyal because he put his life and his future on the line … [he] never got to be a husband, a father, an uncle, a grandfather.”

Infusino said after all this time so many have found the peace of closure.

“Personally, I’ve never reached that level,” he said of losing his friend. “I knew my friend was a tough kid and I still feel to this day if there was one person that would survive any ordeal of confinement, it was Ronny.”

During the ceremony, a sundial was dedicated in honor of Mayercik that represented his time spent apart from his loved ones.

“Part of Ronny always remains with those that loved him,” Infusino said.