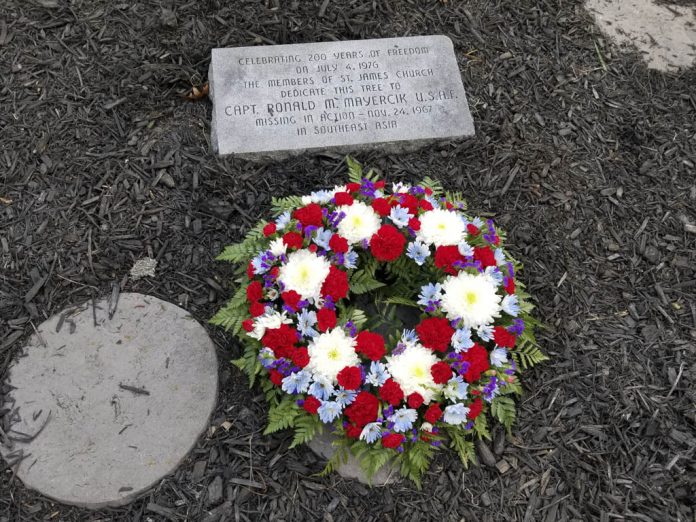 EDISON — It’s been 50 years since Capt. Ronald M. Mayercik, a navigator in the United States Air Force, went missing in action when his F-4 fighter plane crashed in Southeast Asia during the Vietnam War.

And as the years pass, memories of the strapping young fellow who many looked up to are still there; however, loved ones acknowledged they are getting older.

“After being informed that my brother Ron was lost on radar and was missing in action, I could still hear my mother’s words ‘Thank God, he’s only missing’,” Jan Mayercik Buttler recalled, during the annual POW-MIA ceremony held at St. James Episcopal Church on Woodbridge Avenue in Edison on Sept. 16. “Little did any of us know what that really meant. It meant living the rest of our lives with hope alternating with deep despair. [My parents] died never knowing what happened to their son.”

Buttler said the Vietnam War era left a lasting mark on their generation with an anti-war movement that left many men unaccounted for.

“The veterans who did return were shunned and they were made to feel guilty,” she said. “So where are we now 50 years later … Ron is still missing.”

Buttler said one thing that she can affirm 50 years later is never again will there be a conflict where military personnel will go unaccounted for.

“I know our veterans are honored for their service regardless of political affiliations thanks to the families of the men left behind,” she said. “These families gathered together and formed the National League of Families, which resulted in the annual POW-MIA [Prisoners of War-Missing in Action] recognition days and the flags fly over most government buildings thanks to all of us for keeping the issue alive.”

Buttler said now it’s up to the next generation to keep the issue alive.

“We are getting older,” she said. “That’s why my cousin John, he needs to keep this alive, my grandchildren, your grandchildren … they need to never forget.”

John Platt said he was in the third grade when his mom told him about her cousin Ronald Mayercik. This was after he told his mom that he had a class assembly on POWs and MIAs.

“I can remember the excitement I felt to share the story of my heroic relative with my class, but more importantly, I remember the pride I felt [knowing] one of my very own relatives gave his life for our nation,” Platt recalled. “Ronny is someone whom I will never meet, but I feel that I will always know who he is and he will always be my hero.”

Platt said Mayercik’s story inspired him each and every day to pursue a career in military aviation.

“Through his example, [Ronny] has taught me the values of selflessness, patriotism and he will be a role model for me for the rest of my life,” he said.

Platt said the POW-MIA ceremony is held to commemorate the lives of 83,000 American heroes who have been taken Prisoners of War and/or are Missing in Action.

“Younger generations should be taught the sacrifices these soldiers made as it will keep them alive forever because when their stories die they sadly die along with them,” he said. “My life changed forever because of one old story. If we continue to educate our youth about the sacrifices of these men and women, think about the many lives we would change? Many see a name on a monument, a plaque by a tree, a name on a silver band that is on my wrist, but I see a man that has impacted my life more than anyone ever could so yes 50 years have gone by, but those years have not gone in vain.”

Richard E. Barber said he traveled to the ceremony from Somerset after reading about Mayercik in the local newspaper.

Barber said he was drawn to Mayercik’s story. On June 1, 1967, Barber said he was assigned as a captain in the U.S. Army that trained the 599th Ordnance Battalion ammunition support unit on conventional weaponry that was deployed to Bangkok, Thailand. The unit directly supported the United States Air Force in Vietnam.

“I was moved by Ron Mayercik’s story and the brotherhood I felt towards him,” he said, adding that it was an honor to meet Mayercik’s sister and family.

During the ceremony, members of Boy Scout Troop No. 66 helped display the missing man and honors table, the Middlesex County Police and Fire Pipe and Drum Corps provided music and the Sayreville American Legion Post No. 211 presented and retired the colors.

A sundial was dedicated in honor of Mayercik that represented his time spent apart from his loved ones.