The girls’ soccer team at Middletown High School South fell just short of capturing a state group championship, but its magical season this year will be one to remember.

The Eagles faced Allentown High School in the championship game of the NJSIAA Group 3 tournament on Nov. 18 at Kean University in Union. They were defeated by the Redbirds, 2-1.

The Eagles trailed, 1-0, into the second half, but they fought back when senior midfielder Christina Sundt scored with 28 minutes left to go.

The Eagles battled throughout second half, but a late goal by the Redbirds sealed the victory and the Group 3 championship for Allentown. The state title was the first ever for Allentown.

Gabby Cook recorded six saves in goal for Middetown South in the game.

The loss sealed the Eagles’ record at 14-6-5; however, the season was still one for the ages for the program.

The Eagles had not made it to the group championship game  since 2000 and were looking to cap off a historic year.

Head coach Megan Barry was thrilled with the season her team experienced and was proud that it wore the underdog role proudly into each game.

“We have been so blessed with a group of girls who not only worked so hard to get where they are, but they are so humble and appreciative of where they are at this point and the success that they have earned,” the coach said following the loss in the Group 3 final. “Coming into today, they knew that what happened in the past with Northern Highlands was in the past and today was a new day and they had to get the job done. Unfortunately, we missed the net by a hair here and there, and it just didn’t go our way.

“In regards to coming into today and what our feelings were like, we were just happy to be here and to have the success that we’ve had this season because it wasn’t necessarily expected by anyone.”

Sundt, the lone scorer for Middletown South in the Group 3 final, praised her team’s accomplishments despite the loss.

“With it being me and the other seniors’ last year, we just wanted to put it all out there,” she said. “Having the same roster as last year, we knew we could play together and win. Every time we were doubted and just being able to make it all the way here is just a great experience, and I’ll never forget it.” 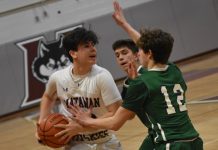