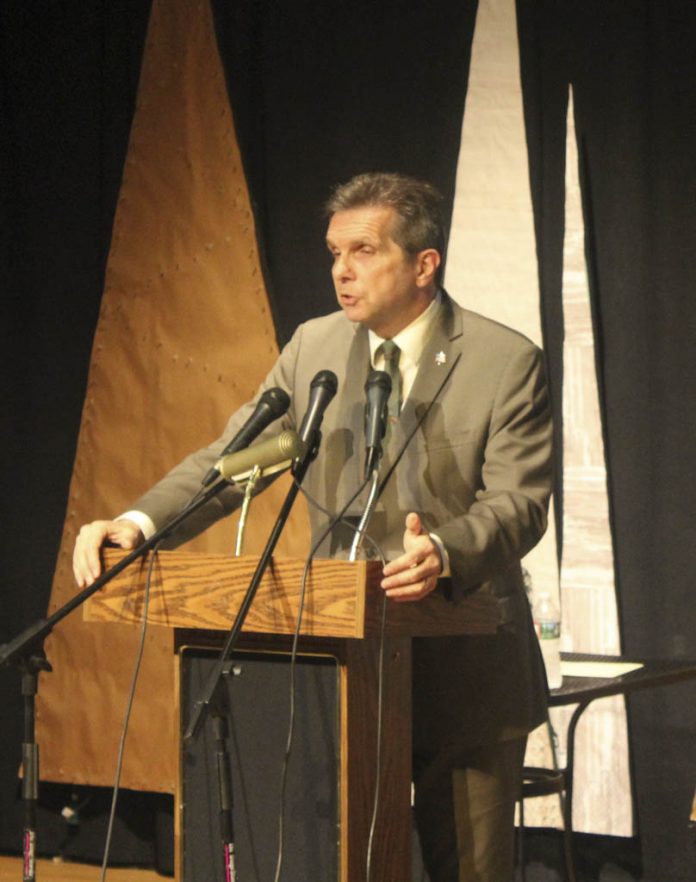 Officials from the Township of Middletown held an Open Space Program and Development forum in an effort to debunk misconceptions pertaining to property expansion.

“People have a sort of misunderstanding of the way development and open space works or they are being fed misinformation. You especially see it around election time and I actually saw a couple of election fliers that were stunning in their inaccuracy,” Mayor Gerald Scharfenberger said. “So, that kind of got me fired up to have this forum right now and try to set the record straight as far as development, because it is one of the biggest issue that we deal with.”

During the fourth installment in a series of township forums, Scharfenberger and Township Administrator Anthony Mercantante explained the township’s open space process and development to residents on Dec. 5 at the Middletown Arts Center.

Scharfenberger said that what the township can and cannot do in terms of development is out of its control due to the rules and procedures set by the state’s Municipal Land Use Law.

“Certainly it is something that we would like to have more control over, but the law is the law. That is why I wanted to have this forum tonight about open space. We have spoken a lot about redevelopment and development, but not much about the other side of the equation. We have been very, very successful as far as open space and I thought it would be a good idea to walk through actually how that process works,” Scharfenberger said.

The township has more than 5,500 acres of permanently preserved open space. The township also has its own open space two-cent tax that generates about $2.1 million each year. However, the state owes the township more than $1.5 million, according to Scharfenberger.

The township should be getting back $1.5 million from the state this year and the township hopes to start buying more property, according to Mercantante.

“For years and years the money we were taking in from the open space tax was just about covering the debt service for properties that we had purchased in the past. We are just about breaking even [and] keeping our heads above water,” Scharfenberger said. “The bad news about that is we don’t have a lot of money to purchase new properties. We are now almost paying off some of those properties, so now we are building a little bit of a war chest and now we are looking around to purchase more open space.”

During the forum, Mercantante used PowerPoint slides to explain the open space process and the misconceptions residents have about development.

The township population has decreased in recent years; however, the number of vehicles in the township has increased, according to Mercantante.

“What has changed is the number of drivers [and] the number of cars. Tthere are a lot more drivers in the home as well. Nowadays, when you turn 16-and-a-half you a get a car. It was not that way when I was that age. You did not automatically get a car. Now it is a rite of passage,” Mercantante said. “So there are just more vehicles on the road. People equate that to growth – [when] there is a traffic jam it must be because there was a housing development that was just built down the road. It really isn’t because of that; it’s background factors.“

Mercantante also said that many residents do not realize that Sandy Hook is part of the township. The people who live there are township residents, they vote in the township and their children attend the township’s schools.

According to Mercantante, the township preserves open space in three ways that include buying a piece of land, creative development techniques and donations and easements.

Mercantante said that the town tries to be proactive and reach out to property owners if officials hear about land that might be going on the market. However, in recent years the township has not been able to purchase land due to depleted funds.

“In a broad sense you would approach a landowner, they want $1 million for their property, you are required by the process to get two appraisals and those two appraisals are then sent to the state’s Green Acres program,” Mercantante said. “The reason we participate in this is that they reimburse you 50 percent of the acquisition costs, which should be about the appraisals cost. That is a good deal [and] you are going to get 50 percent of your money back.”

Even if land in the township is going to be developed, Mercantante said that there are ways the township can preserve open space by using creative development techniques.

Showing a slide of the township’s Wood Lake Heights housing development, Mercantante said that many of the houses are surrounded by open space.

“What happened is that these lots were built, let’s just say for example if it was a one acre zone where you are supposed to have one unit per acre, there are provisions in the rules where you can put your house on half an acre instead of one acre, but you have to preserve what is left over,” Mercantante said. “So what happens is that these homes are now surrounded by or they surround really nice areas of open space. So  it’s a way of preserving land to benefit the immediate residents who live in those homes.”

Mercantante said that a property owner can get a tax credit for a donating their land and that some property owners have found that to be beneficial.

“You get easements on a property, where you are not taking the property and fee, but you are getting the owner to put some limitation on their property so that they won’t disturb a portion maybe forever and usually forever and that devalues their property and it also lowers their assessment and they’re kind of OK with that. They are also OK knowing that this piece of their property is not going to be developed by a future owner,” he said.

According to Mercantante, the township has 49 active parks, not including the school properties. The township also has 48 active baseball fields, about 20 soccer fields, 46 tennis courts, and a huge array of recreational facilities.

“Now when we look at acquiring more open space, we have to decide what are we going to do with it? Is it just going to be passive open space, because if it is anything more than that it starts to affect our resources [and] our ability to cut the grass, to stripe the fields or whatever needs to be done. It’s a challenge and it has to be done in a thoughtful way, because you have to be able to take care of it and take responsible for it,” Mercantante said.