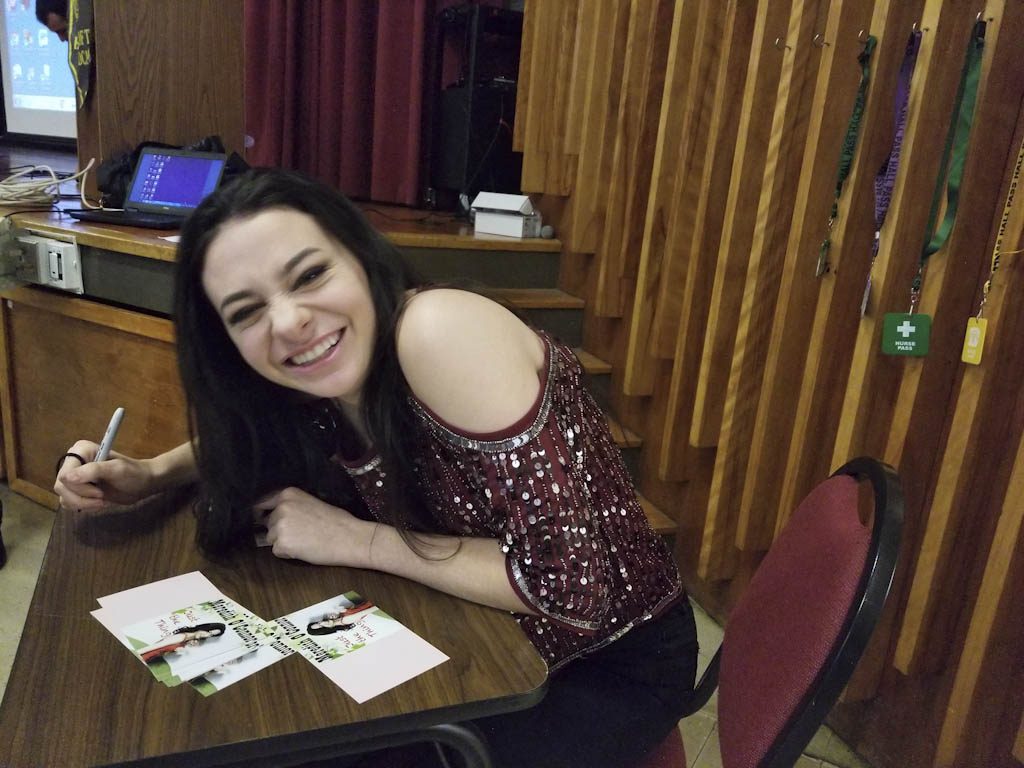 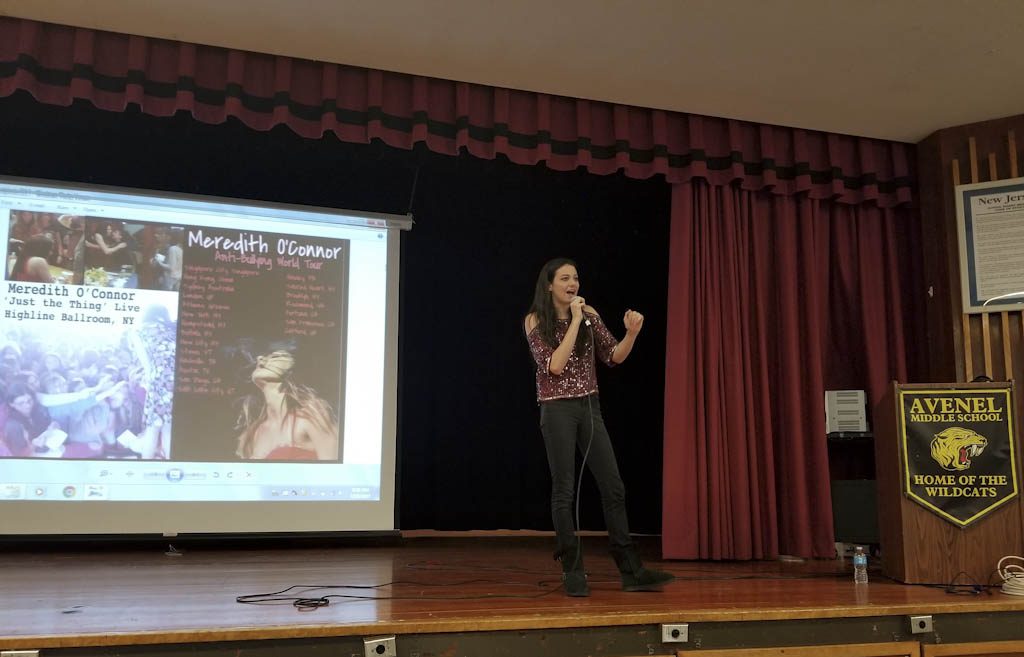 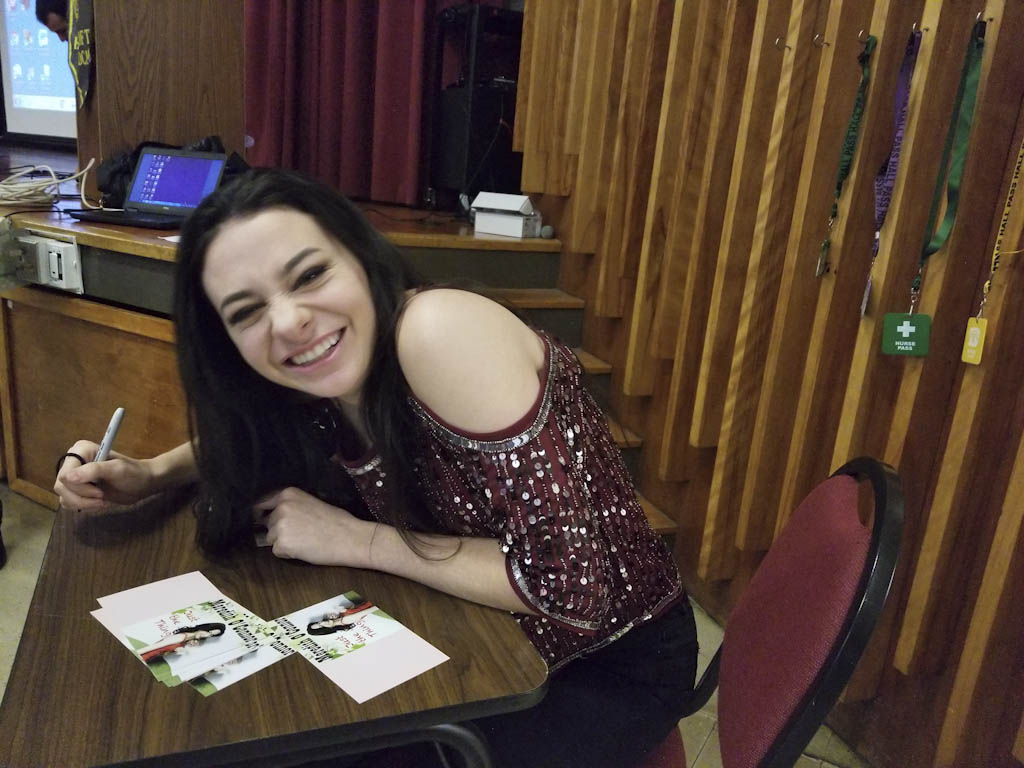 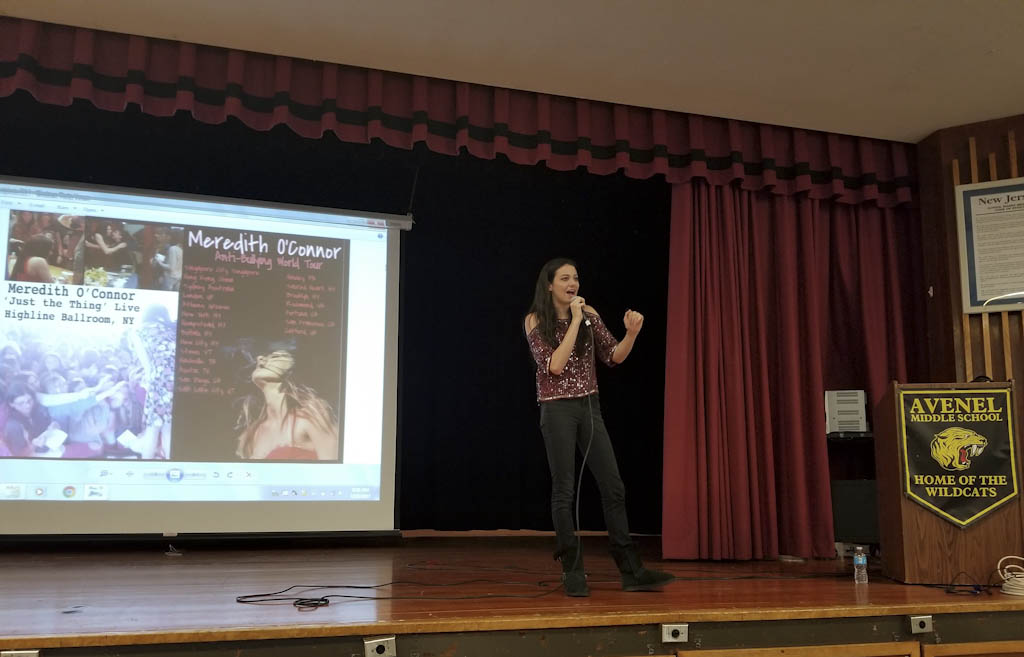 WOODBRIDGE — At age 12, Meredith O’Connor was the lead in her school play and modeling for a model agency.

Despite such accomplishments at a young age, O’Connor was being bullied by some of her peers. The bullying had started as early as elementary school.

This left her with low self-esteem. She said she was living in fear, suffered from anxiety and felt all alone.

“Middle school was the hardest part of my life … when it was supposed to be good time,” O’Connor, who is now 21, said as she reflected on her middle school years. “I told no one about it.”

O’Conner is now a singer/songwriter, whose music and videos have been featured on Disney and Nickelodeon.

She is also an anti-bullying advocate and a United Nations youth ambassador and is using her platform to tell her story as a victim of bullying.

The pop star visited the four middle schools in Woodbridge — Avenel, Colonia, Fords and Woodbridge — on Dec. 8 and 9 to share her inspirational message, “You are not alone.”

The middle school students learned that O’Connor endured verbal abuse of name calling, physical abuse of pushing and shoving — one incident left her with a broken nose — and exclusion from a group of so-called friends who started rumors about her.

O’Connor said at the time, she felt she deserved to be called “ugly” and deserved the broken nose.

O’Connor put her emotions into her love of music with a song called “Celebrity,” which went viral on the internet. That snowballed after she was discovered by Rick Galvin and CG Talent Management.

Kenny Ortiz is executive producer and Heather Holley is vocal producer and co-writer,on O’Connor’s new full length album titled “I am” under the direction of Galvin.

Ortiz and Holley are with Metamorphosis Productions LLC.

The album focuses on themes of overcoming adversity and embracing one’s own unique qualities and features the song “Stronger,” a duet with “Teen Beach Movie’s” Garrett Clayton.

Three years ago, she released “The Game” and soon after her song “Just the Thing” became a hit, with the music video featured on Teen Nick and VEVO.

The song garnered a LAIFF (Los Angeles Independent Film Festival) award. The video, filmed in a school, is about how it can be a good thing to be different.

O’Connor said with the hype of her newfound success just after “The Game” was released, she remembers she was at a business meeting surrounded by people she did not know, discussing ideas on what organizations she should give back to.

That is when O’Connor said she mentioned what had happened to her in middle school, which then led to the anti-bullying movement with her music. Up until then, she did not tell anyone about her story.

“This is what is close to my heart and what I am truly passionate about,” she said.

The bullying, she said, could have stopped a lot sooner if she had spoken up sooner. It was something O’Connor said she felt she did not deserve help for; however, with her speaking up now she hopes to let people know they are not alone and can speak up about it.

In her journey, she said she also learned to not blame the bully and look at the reasons why the person may be a bully.

O’Connor has spoken about her experience at schools in more than 100 cities internationally, which she said has been garnering many positive messages.

While on the East Coast before she heads to India, she will also continue her work with the Nassau County District Attorney’s Youth Safety Council and a performance in New York City.

Seventh-grade students at Avenel Middle School enjoyed O’Connor’s presentation. Some students said they knew her music before her visit to the school.

“I liked her messaged,” said Kara Mitch, adding that O’Connor’s presentation shows that one does not have to try to be someone else.

Grace Daramola agreed, adding that the message lets people know they are not alone.

Elizabeth Spillar said she was happy that O’Connor is not hiding her story and sharing it with others in hopes to change people’s lives.

Haadi Mir said he liked O’Connor’s message and added that the young pop star has a good voice.

“It’s OK to be different in your own way,” he said. “You should not change for anybody, stick with who you are.”

The students were able to meet O’Connor after her presentation. She said the students would be able to follow her on social media as she personally sends out messages. 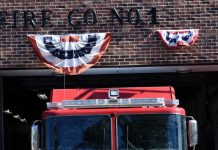 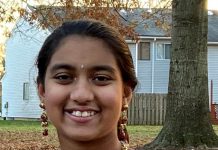