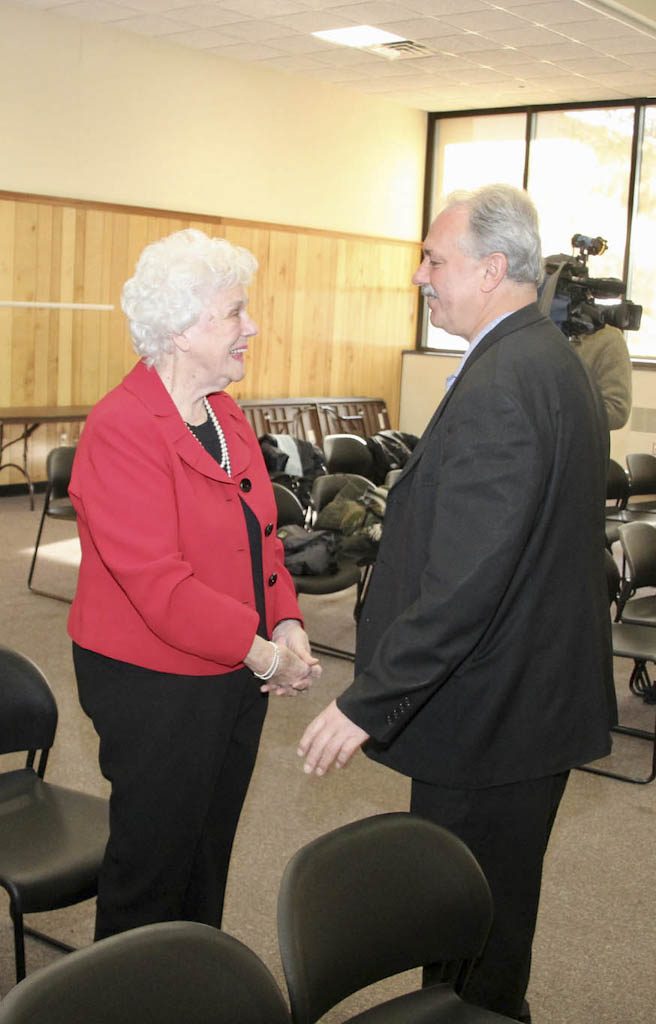 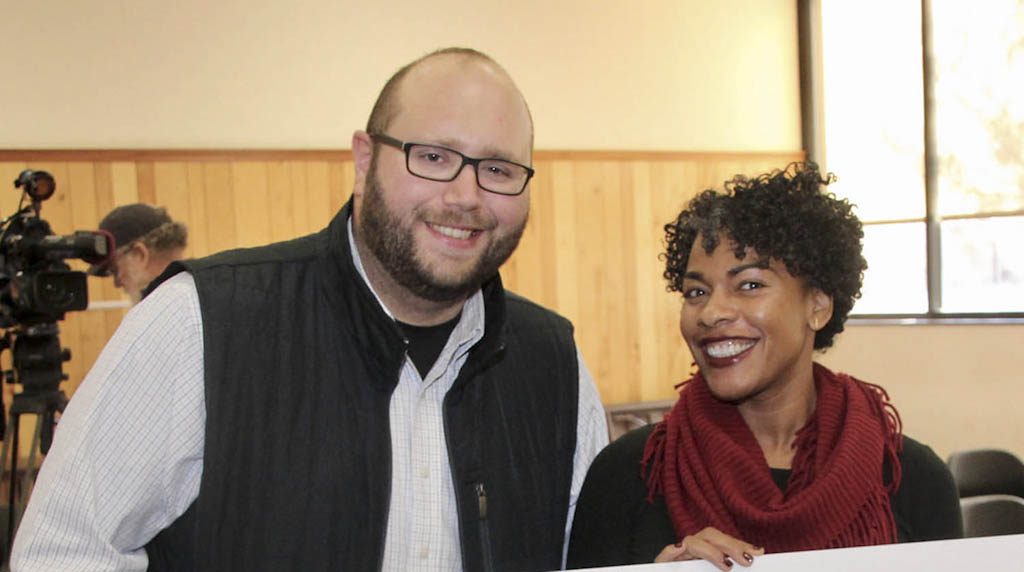 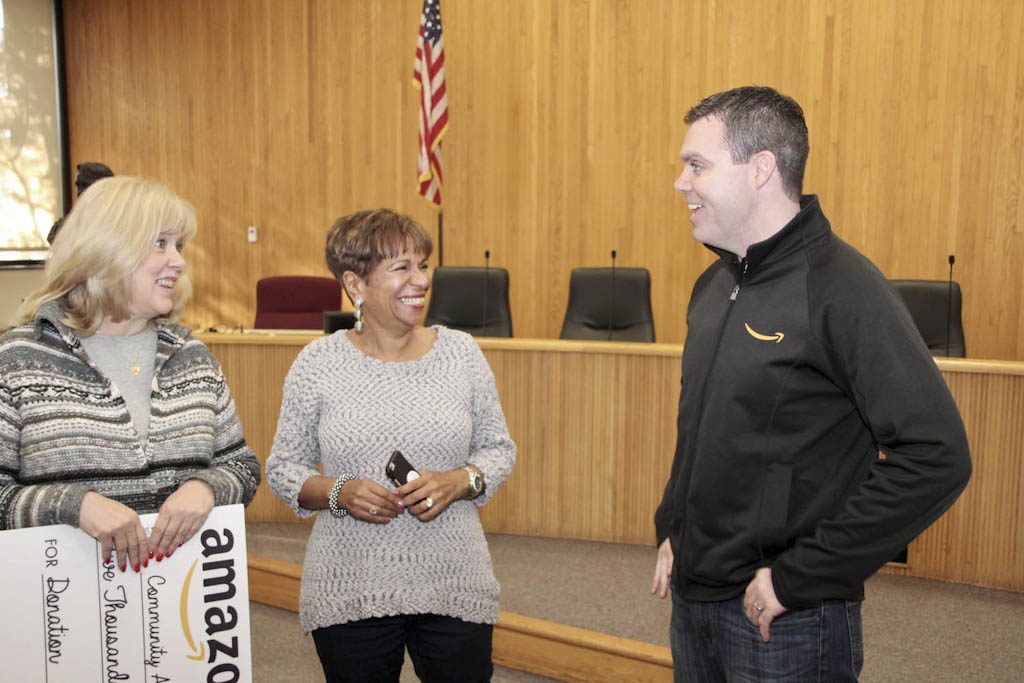 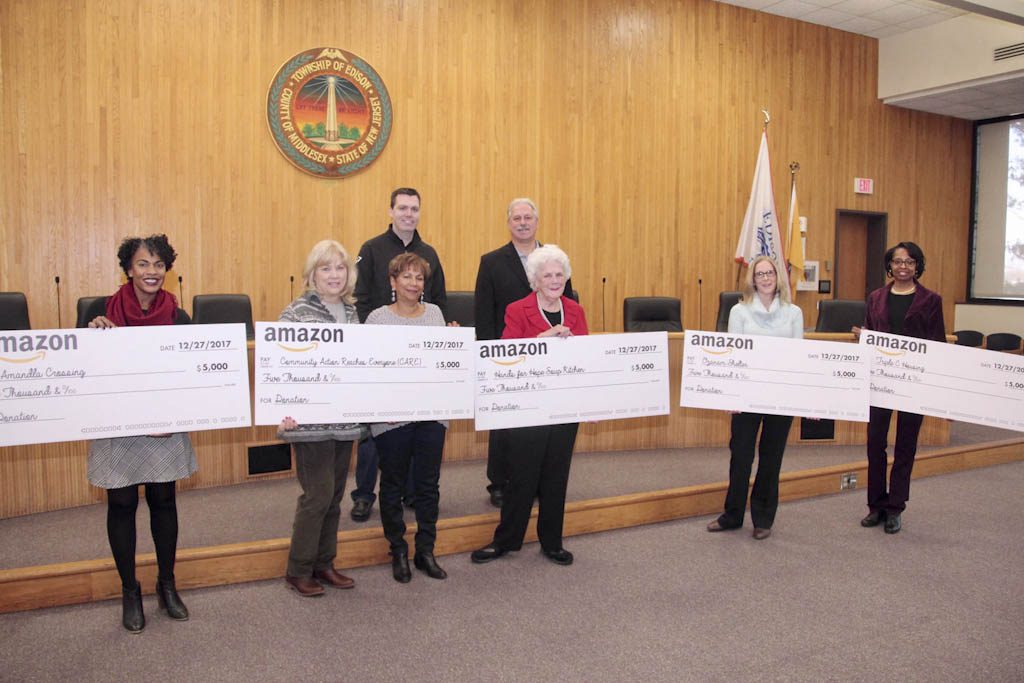 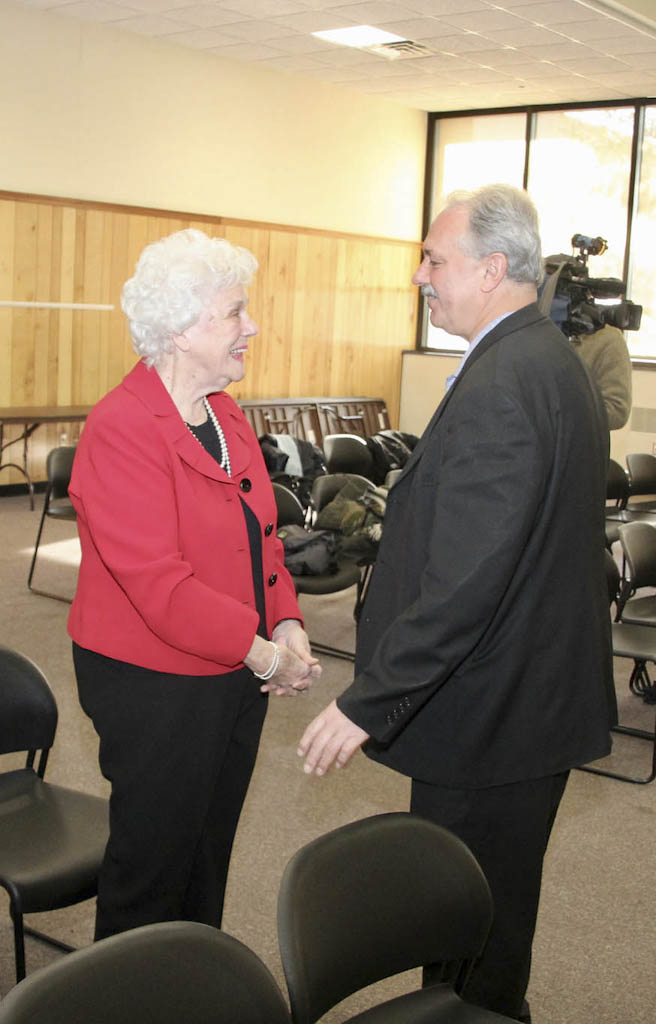 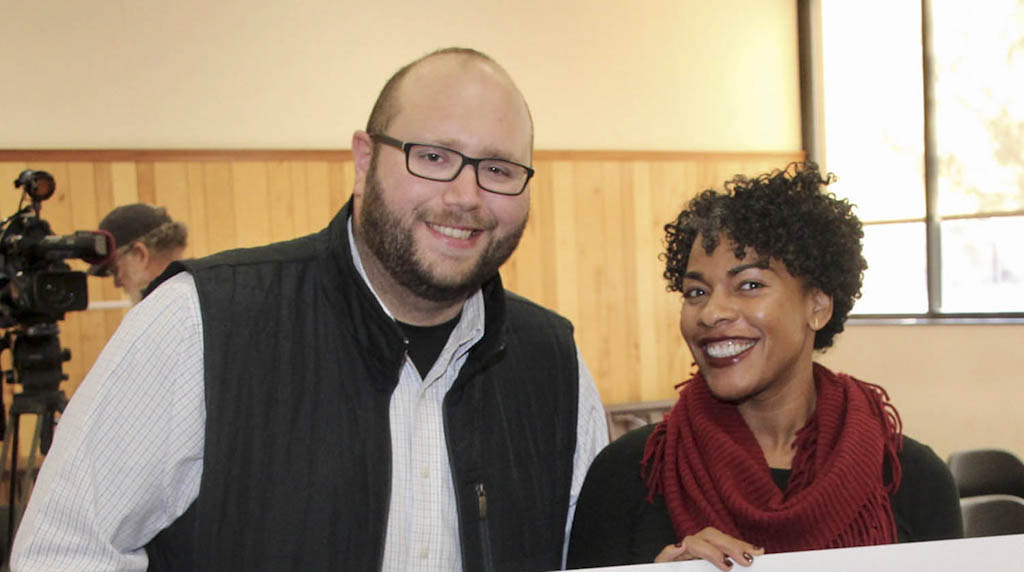 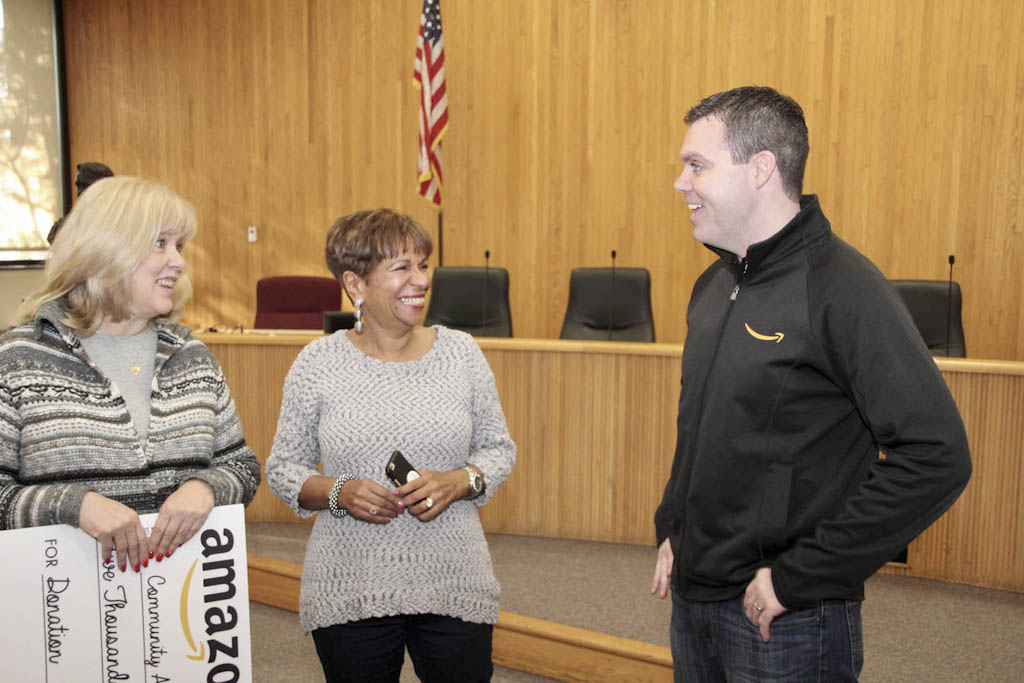 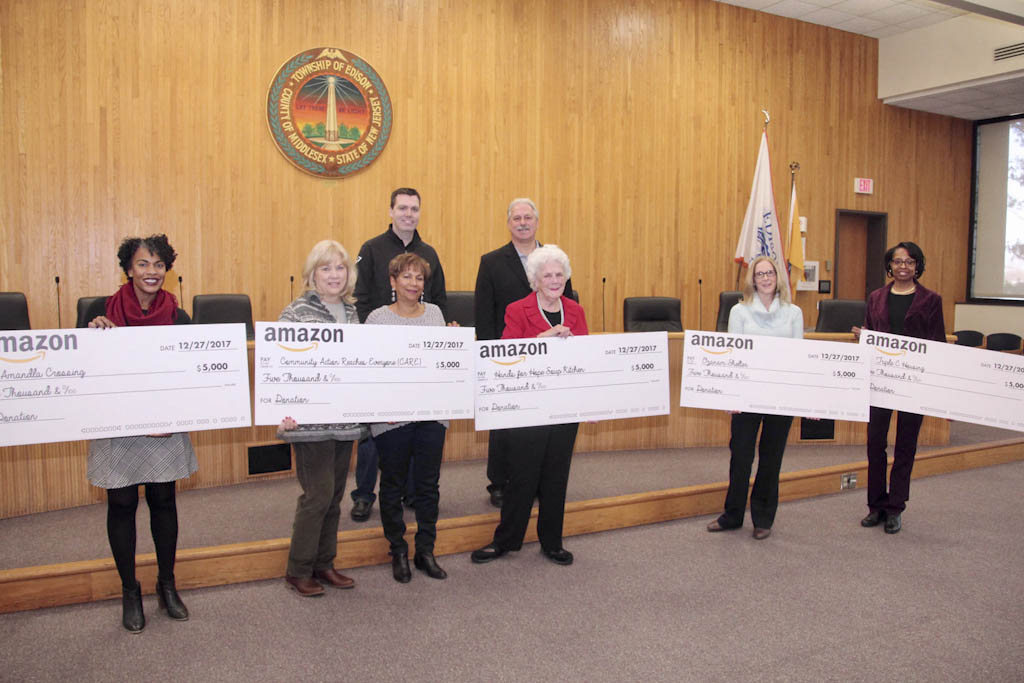 EDISON — In July, a spokesperson for Amazon announced that the company was committed to being involved and giving back to the local communities.

Representatives from Amazon in July had visited the Edison Public Library and had announced the donation of 75 Kindles and an Echo as part of a celebration of summer reading programs.

Fast forward six months later, the online retailer, which opened a 900,000-square-foot fulfillment center in the township in October, has once again delivered on its word.

The end-of-the-year donations came as a surprise for the non-profit organizations, which received a call in the past week from the mayor’s office with the cheerful news that Amazon was planning on donating $25,000 in Edison.

“At Amazon, we have a saying: Work Hard, Have Fun, Make History,” said Ryan Smith, director of operations at Amazon’s fulfillment center on Route 27 in Edison. “We certainly accomplished all of that at our new building in Edison, and we look forward to even greater things in 2018.”

The five non-profit organizations are Triple C Housing, which brings affordable housing opportunities complimented by supportive services to individuals and families; Amandla Crossing, a 29-unit transitional housing program for homeless single parent families on public assistance; Ozanam Shelter, which provides emergency shelter for single women and families; Hands for Hope Soup Kitchen, which provides an efficient and effective centralized system for distributing food to alleviate hunger; and Community Action Reaches Everyone, or C.A.R.E., which provides help to more than 400 families with their specific needs.

“They have all made heroic efforts on behalf of children and families,” Smith said. “Each nonprofit reaches deep into our community to serve those in need not just during the holidays but all year long. We are so thankful for all that you do.”

Lankey said Amazon has been a strong corporate partner for the township. He pointed out that Amazon donated Kindles to non-profit groups and libraries over the summer.

“Amazon is now taking the next steps to become a great community resident,” he said. “Amazon worked closely with my office on these donations, which we are proud to present. Amazon has only been here a short time but has already done a lot.”

Kimberly Ewell, director of operations at Triple C Housing, accepted the donation, and revealed that 92 cents of every dollar raised supplies food, gift cards and other necessities to Edison residents falling on hard times.

“We are so grateful to Amazon, as the company is helping us meet the household needs to the consumers we serve,” she said.

Rebecca Rhoads, director of housing and social concerns at Catholic Charities, accepted the donation on behalf of the Ozanam housing shelter.

“We serve 300 people a year and most of our families have children,” she said. “Our shelter provides three meals a day as well as clothing and medicine. We even pay for gas so someone can go on a job interview. That is why donations, such as what we are receiving from Amazon, are so critical.”

For the Hands for Hope soup kitchen, the $5,000 donation was a welcome surprise.

Jackie Goedesky, president of the non-profit that operates in the basement of St. James Episcopal Church on Woodbridge Avenue, said this has been the busiest year in the 25 years the soup kitchen has served Edison.

“We began by serving 10 people, now we have 4,000 families on our list,” Goedesky said. “This year, we had to spend $39,000 at Shop-Rite because we didn’t have enough donated food. So, we are going to use this gift from Amazon to buy more food. It takes a lot of money to keep feeding such a volume of people, which is why we are so appreciative of this donation.”

For Dora Ramos, president of Community Action Reaches Everyone, this was not her first Amazon donation. She reported that the company representatives presented her with 45 Kindles in early fall.

“When I got a call from the mayor’s office with news that Amazon wants to donate to us again, I couldn’t believe it,” she said. “We are all volunteers, doing what we can to help 425 needy children in Edison. Amazon has become such a blessing for us.”

The mayor accepted the donation on behalf of Amandla Crossing, which was unable to have a representative at the check presentation.