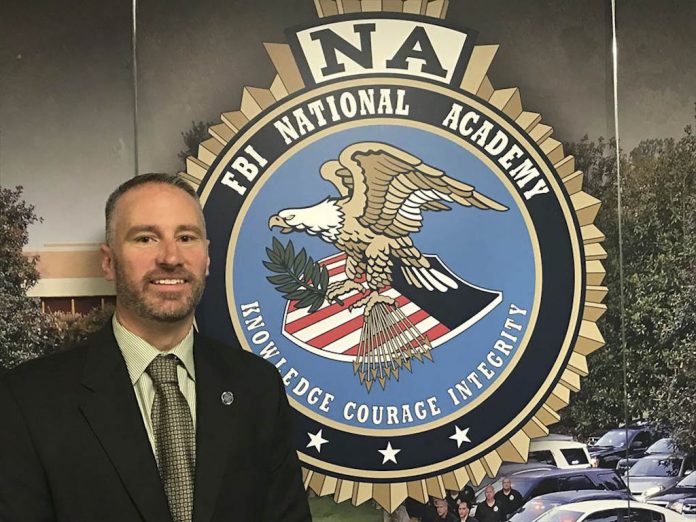 NORTH BRUNSWICK – North Brunswick Police Captain Brian Hoiberg was among 220 graduates of the FBI National Academy Session No. 270 at a graduation ceremony held on Dec. 15 at the FBI Training Academy in Quantico, Virginia.

After completing the 11-week course, Hoiberg now joins the ranks of FBI National Academy graduates who make up less than one percent of the country’s law enforcement officers, according to information provided by North Brunswick Township.

On average, these officers have 21 years of law enforcement experience and usually return to their agencies to serve in executive-level positions.

“It was challenging, both educationally and physically, but in the end was worth every minute,” Hoiberg said in a prepared statement. “Not only were the lessons learned, but the friendships made, both domestic and international, are incredible.”

“We were honored to have them attend our event,” said Hoiberg, noting that it had been 47 years since a president attended a graduation ceremony.

In the academic portion of the program, classes were offered in the following areas: law, behavioral science, forensic science, understanding terrorism/terrorist mindsets, leadership, communication, and health/fitness.

“To me, the most interesting part of the courses was two-fold,” Hoiberg said in the statement. “First, to have the opportunity to meet and be taught by some of the best in their fields, decorated military leaders, and major players from national events. Second, to be able to sit along side and discuss contemporary issues with police leaders from around the globe was extremely interesting.”

Hoiberg also successfully completed the “Yellow Brick Road,” which is the final test of the fitness challenge.

The Yellow Brick Road is a grueling 6.1-mile run through a hilly, wooded trail built by the United States Marine Corps. Along the way, the participants must climb over walls, run through creeks, jump through simulated windows, scale rock faces with ropes, crawl under barbed wire in muddy water, maneuver across a cargo net, and more, according to the statement. When – and if – the students complete this difficult test, they receive an actual yellow brick to memorialize their achievement.

“I cherish my time spent at the National Academy, as well as the friendships made there. I could not have done it without the support of my department and my family. Both allowed me the opportunity to be away for nearly three months. I appreciate all that they did that allowed me to attend,” Hoiberg said in the statement. “Being a part of Class No. 270 is something that I will never forget.”

“Our department is very proud to see one of its own graduate from the FBI National Academy,” Police Director Kenneth McCormick said in the statement. “We congratulate Capt. Hoiberg on his accomplishment.”