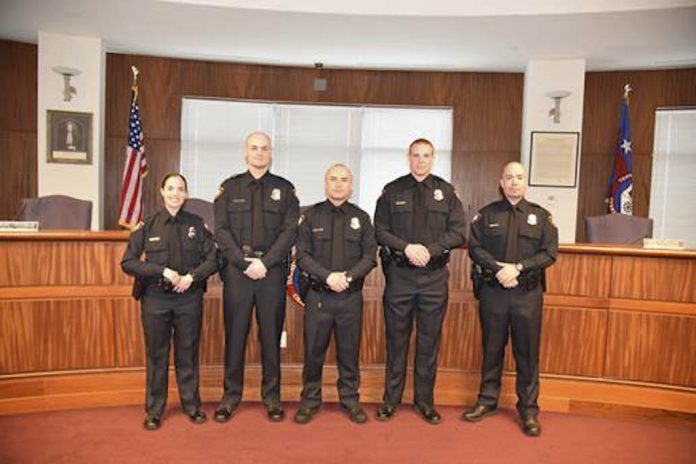 The new officers completed the state-mandated six-month police training program at the Cape May County Police Training Academy and will immediately take up patrol assignments on the streets of Woodbridge Township.

The new officers — David Torres, Stephen Joseph Kuzma, Adam Romatowski, Matthew Sharkey and Jessenia Minsal — were sworn in during a ceremony on Jan. 12.

Torres, 34, grew up in Staten Island, New York, and took up residence in Colonia in 2014. He served in the U.S. Marine Corps from 2005-11 and was deployed to Iraq as a tilt-rotor airframe specialist mechanic. He received service awards and decorations for his active-duty deployment.

Prior to being hired by the Woodbridge Police Department, Torres was employed as a chemical technician at Proctor and Gamble in Avenel.

Kuzma, 24, is a resident of the Iselin section of Woodbridge. He graduated from John F. Kennedy Memorial High School in 2011. Following graduation, Kuzma enlisted in the U.S. Army and was deployed to Afghanistan to serve as a military police officer. He received active duty deployment awards and decorations.

Following his military service, Kuzma enrolled in Kean University and continues work towards a degree in criminal justice.

Romatowski, 32, is a resident of Avenel. He was born in Poland and immigrated to the U.S. with his family when he was eight years old.

After obtaining U.S. citizenship, Romatowski served in the U.S. Marine Corps Reserve from 2005-12 and was deployed to Iraq. He received active duty awards and decorations upon completing his military deployment.

Prior to being hired by the Woodbridge Police Department, Romatowski served as a New Jersey State Corrections officer.

Sharkey, 28, resides in the Iselin section of the township. He graduated from John F. Kennedy Memorial High School in 2008.

Following graduation, he served in the U.S. Army from 2010-15 and was deployed to Afghanistan where he served as a military police officer. Sharkey received active duty awards and decorations upon completing his military deployment.

Sharkey currently serves in the U.S. Army Reserve.  Prior to being hired by the Woodbridge Police Department, Sharkey he a dispatcher at Fords Fire Department District No. 7.

Minsal, 26, is a resident of Port Reading. She graduated from Woodbridge High School in 2009.

After graduation, Minsal served in the U.S. Army as a military police officer and was stationed at Guantanamo Bay in Cuba. During her service, Minsal received active duty deployment awards and decorations. Minsal continues to serve in the U.S. Army National Guard.

Prior to being hired by the Woodbridge Police Department, she worked as a loss prevention officer for ShopRite.