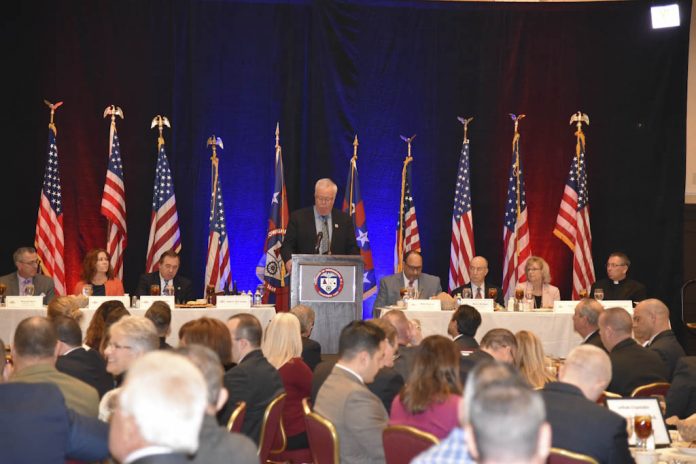 WOODBRIDGE — The economic development activity in the township last year saw outstanding progress with the likes of Dave & Buster’s at the Woodbridge Center Mall, and 2018 looks to be even better, Mayor John E. McCormac said during his State of the Township address.

“Our signature commercial project this year is the huge investment by Arizona Iced Tea, which recently broke ground on a nearly 1 million-square-foot manufacturing facility in Fords where they will not only brew tea, but will also manufacture the cans and bottles and package everything for shipment right there,” McCormac said during the Woodbridge Metro Chamber of Commerce-sponsored event, held at the Renaissance Hotel and Conference Center on Route 1 on Jan. 30. “No town in the state that I know of has a manufacturing facility opening within its borders.”

McCormac said township officials have been talking to Arizona Iced Tea for many years, but the project is finally underway. The site is just outside Raritan Center and is expected to produce more than $20 million in revenue to the township over 30 years, he said.

Sitex just opened a new warehouse on Blair Road in the Avenel section of the township and renovated another. The Principal Group has started to build a 245,000-square-foot warehouse at the corner of Rahway and Randolph avenues, which will open this year.

The Goodman Group has plans for a new warehouse on the PQ Corporation site in Avenel and numerous companies have looked at land off Pennval Road in Sewaren to try and build more warehouse space at the site, he said.

“We compete with all the towns around us every time a business looks for where to expand or where to locate and [we need to] offer a competitive edge in the ease of doing business and a less costly and less lengthy process from start to finish,” McCormac said.

The mayor noted Marta Lefsky, director of planning and development, and Caroline Ehrlich, chief of staff and executive director of the township redevelopment agency, have been instrumental in the process.

Pennrose Properties finished its financing and is now starting construction of 100 apartment units on Rahway Avenue. Twenty five of the units will be specifically dedicated to the population with developmental disabilities within Woodbridge.

“We hope the remaining units will be rented to other families and individuals with special needs,” McCormac said.

Buckeye Pipeline, which bought the Hess terminal facility, is primed for a major investment of millions into the site.

“It was a slight blow to the township when we lost the Hess Corporation as a major taxpayer, and an even bigger blow when their taxable building was sold to the [New Jersey] Turnpike Authority,” McCormac said, who also noted that the Turnpike Authority is exempt from property taxes as a governmental entity. “The investment by Buckeye will much more than make up for that loss. We actually lost our biggest taxpayer, but within a few years we should have more ratables in its place.”

And PSEG is months away from opening the second power plant in Woodbridge next to their Sewaren generating station in an investment worth more than $500 million.

“Not to be outdone, CPV [Energy Center] is investigating the feasibility of another power plant right next to their current one in Keasbey which will add another hundreds of millions of dollars of investment in Woodbridge, and we are encouraging them every step of the way,” McCormac said. “Just imagine, three power plants producing over $7 million in tax revenues with literally no additional expenses in our annual budgets. Deals like these are why we are able to invest so much into our schools.”

Additional luxury apartment development is underway around the MetroPark train station where residents will likely be commuters without school children, the mayor said.

Fieldstone Properties invested nearly $150 million in purchasing apartment complexes in Fords, Iselin and Menlo Park Terrace and the company is investing additional millions to renovate those units, he said.

Route 1 has been, and continues to be, improved with the Wawa, Holiday Inn Express and a new Quick Chek and other new retail space at the Big Top site, all of which replaced eyesores, McCormac said.

He said Dunkin Donuts and Wendy’s and other recognizable names will soon pop up along that corridor of Route 1.

“The old abandoned General Dynamics plant has been turned into absolutely beautiful apartments both outside and inside,” he said. “There will be 500 units, including 50 which will be affordable to meet our state obligations.”

The site will be upscale retail space and the one facility that will be the township’s pride and joy for years to come is the 200-seat theater with a bar/restaurant appropriately called Curtains.

“Carol had the vision for an arts-themed development 11 years ago and has worked literally every day to make this project happen and be successful,” McCormac said about the township’s chief of staff. He also said that the township has already begun to see the impact this project has had on Avenel. “A county grant approved by our very own Freeholder Charlie Kenny and shepherded through the process by Freeholder Director and Woodbridge native Ron Rios got the project off the ground.”

The township hired Anthony Wilkinson, an Emmy-winning actor, director and producer, to be the executive and artistic director of the facility. The theater broke ground last week.

“Anthony has literally traveled the country attending seminars and meeting acts and agents and other directors and producers,” McCormac said. “He has already begun to fill the calendar with concerts and plays and other shows that will keep the new theater hopping nearly every night of the week. The bar/restaurant will be run by the Woodbridge Arts Alliance and will have additional entertainment every single day.”