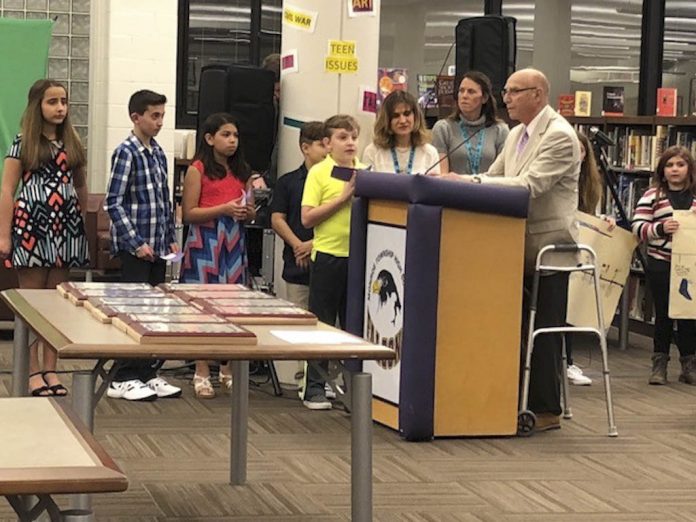 MONROE — Freshman Vinisha Patel said she feels safe when she enters the doors of Monroe Township High School because of the security guards.

“Many of the security guards are [retired] police officers and they really care about us,” she said.

And with the school district’s news to eventually arm the security guards, Patel said she is in full support.

“The people who will be carrying guns will be licensed to carry guns,” she said.

Patel said last week that Monroe Township High School Principal Robert Goodall informed all students at the high school of the district’s move to initially place police officers at the schools and the eventual move to provide armed security guards.

“[Principal Robert Goodall] told us 10 years ago he would have not supported the move for armed guards,” she said. “We have had eight school shootings this year … it’s a depressing world we live in.”

School officials, township officials, Police Chief Michael E. Lloyd and members of the Monroe Township Police Department came together on Feb. 20 to discuss proactive school security measure in the wake of the Feb. 14 school shooting in Parkland, Florida, where a 19-year-old former student killed 17 teachers and students at Marjory Stoneman Douglas High School. A public forum on school safety was held later in the evening with members of the public at the high school’s Performing Arts Center.

Superintendent Michael Kozak said many security measures are already in place as well as social, emotional and health programs for students.

The common suggestion from parents and the public at the forum was to place armed security guards in the school buildings, he said.

“We met with the police chief the next day to see how we could provide an armed presence in the schools,” he said. “In order for the district to arm our security guards, we would have to change our policy, which would take place over a two-month period.”

Kozak said he spoke to the neighboring superintendent in East Brunswick, whose school district recently implemented armed security guards, to see how Monroe could speed up the process until the district is able to change its policy.

“We looked at an alternative to hire police officers and we found the cost is high for eight schools and [coverage] five days a week,” he said.

Up until a few minutes before the Monroe Township Board of Education meeting on Feb. 21, Kozak said providing an armed presence at the schools was in the discussion phase.

However, that all changed when Mayor Gerald W. Tamburro and Lloyd announced an interim plan for the placement of off-duty township police officers to provide full-time protection to supplement current district security teams.

The mayor noted the township would bear the expense of the officers under the temporary plan. The sworn officers would be working in addition to normal patrols so there will be no impact on police response or service levels within the community.

“We are one united community and the safety and security of our children is paramount,” Tamburro said. “Working with Board President Kathy Kolupanowich, I am pleased that we are able to effectuate this interim plan immediately and help address the safety concerns of our teachers, parents and students so that their focus can remain on learning.”

Tamburro – a father of six children and grandfather of nine grandchildren – said children are the future.

“This was a no-brainer [decision] because of the kids,” he said.

Kozak said the school district is appreciative of the township’s help to address the important school safety measures.

“It is yet one more sign of a shared service between the school district and the township,” he said.

The school principals addressed the students on the school safety measure last week and letters were sent out to parents/guardians.

The Board of Education will amend its present policy over the next several meetings to permit current security staff members, many of whom are retired law enforcement officers, to assume the armed detail in the near future.

“As the spouse of an elementary school educator and a parent, I cannot imagine what the community in Florida is going through,” Monroe Township Council President Stephen Dalina said. “Schools should be a safe place and having these officers in each of our school buildings will help ease the anxiety and fears our students and parents have expressed.”