Kelsey Theatre to Present “The Merry Wives of Windsor” 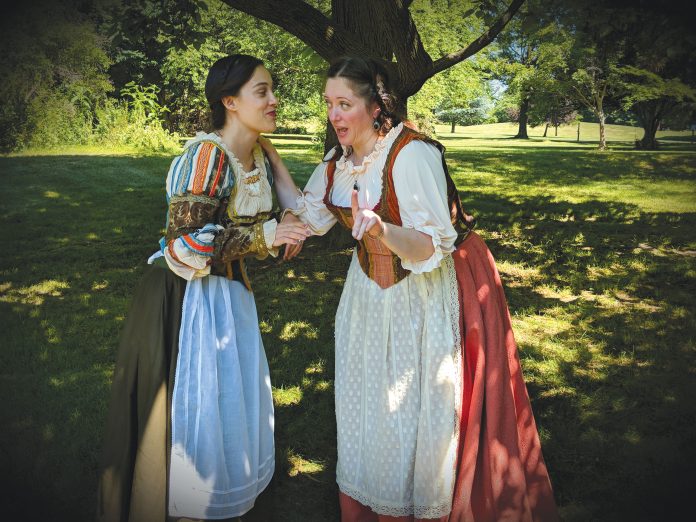 William Shakespeare – medieval bard, classic playwright and Elizabethan comedian – has been regarded as one of the greatest composers of the English language.

“The Merry Wives of Windsor,” a Shakespearean comedy that has received the brunt of criticism for centuries, follows the story of a recurring rogue that has been incorporated amidst numerous of The Bard’s literary works.

Theater company, Shakespeare 70, will showcase “The Merry Wives of Windsor” on June 22, 23, 29, 30 and July 1 at the Kelsey Threatre, which is located at Mercer County Community College in West Windsor.

Shakespeare 70, now in its 49th year of productions, is a Ewing-based theater dedicated toward producing contemporary and classic plays.

Janet Quartarone, assistant director of the “The Merry Wives of Windsor,” said the premise of Shakespeare’s late 16th-century comedy centers on the happenings in the colorful Elizabethan town of Windsor, England.

Falstaff, the play’s protagonist Quartarone described as an ageing, overweight knight who is “down on his luck,” is looking to obtain “a financial advantage” after attempting to court two married women he hopes to receive money from.

After Falstaff sends identical love letters to the women in an effort to win over their already-spoken-for hearts, Quartarone said, the women decide to toy with the newcomer after they immediately forecast the rogue’s deceitful intentions toward his transparent effort to make a quick buck.

“These are fun-loving, respectable women who have control over their husband’s wallets,” Quartarone said.

For the women’s own amusement, she continued, the merry wives pretend to fall for Falstaff’s romantic advances, and end up playing humble pranks on the aging knight throughout the play’s entirety.

Quartarone described the classic performance as “playful and whimsical.”

“What you see is what you get,” Quartarone said in response to the infamously “inferior” Shakespearean work, as the play is known.

“The Merry Wives of Windsor” has been critically reviewed as The Bard’s weakest play due to the absence of substance within the context of Shakespeare’s words.The comedic basis of the play is exempt from aspects of Shakespeare’s routinely inquisitive, rather thought-provoking themes, which are seen throughout his other works of romance, power and tragedy.

Quartarone described Shakespeare’s works of comedy as “a different kind of animal.”

In a statement administered by Shakespeare 70, The Merry Wives of Windsor has said to have been “hailed for dramatizing the emergence of a new middle class, eschewing pretension and aristocratic authority, while championing female autonomy and the power of love to break down class distinctions.”

Dale Simon, who plays Falstaff in the upcoming production of “The Merry Wives of Windsor,” brings humor and endearment to an otherwise timeless role, Quartarone said.

“He (Simon) strove to make this character loveable. He really understands Shakespeare’s voice and enjoyed finding the nuance in this character,” Quartarone said.

Falstaff, who is said to be one of Shakespeare’s greatest comedic characters, has also appeared in the plays Henry IV and Henry IV Part II.

Quartarone said it was Queen Elizabeth who (allegedly) presented a request to Shakespeare himself asking that Falstaff appear in a comedy, rather than tale of England’s history.

Aside from the central storyline pertaining to a rogue’s insufficient romantic advances, the subplots themselves intersect within the tale of the recurring Falstaff, Quartarone said. “This is a very silly play. The characters have their own idiosyncracies.”

With an opening night dating back to 1602, the Shakespearean saga, as some might call it, has been produced and remastered over a period of centuries.

In order to incorporate an individual take on an otherwise classic performance, Quartarone said, the “playfullness” of the performance is what is going to make the modern-day production memorable.

After toying with different ways in which to give the performance new life, Quartarone said she wanted to experiment with different notions of transparency she said would add to the overall exuberance of The Bard’s classic, comedic production.

Those in attendance will be able to see the transitions between individual scenes, as well as the play’s characters entering and exiting the stage, Quartarone said. Attendees will even be able to sit on the stage, where actors will playfully engage with those who choose to experience an up close and personal performance.

“We really wanted to people up this play,” Quartarone said.

For tickets to “The Merry Wives of Windsor,” visit, kelseytheatre.net.