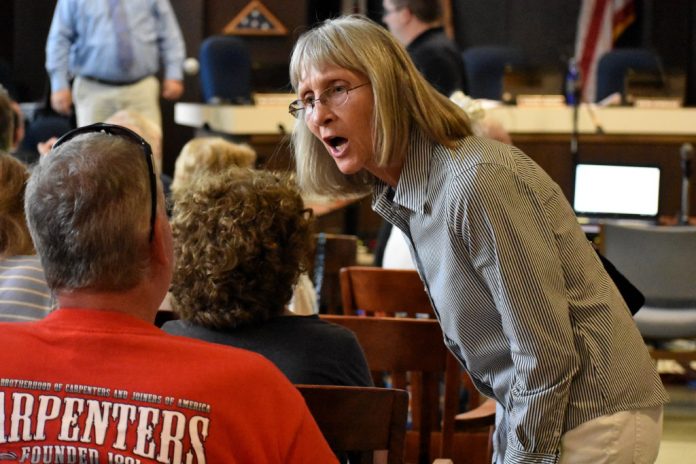 The Eatontown Planning Board has approved an application that proposed the redevelopment of Monmouth Mall and the construction of 700 rental apartments on the mall’s property.

On July 16, planning board members voted 7-1 in favor of the application in the meeting that attracted a large audience at borough hall.

The meeting was the seventh hearing–during a period of over three months– on an application that was filed by Eatontown Monmouth Mall, a joint effort between Kushner Companies and Brookfield Properties, which was formerly known as Rouse Properties.

The mall is at the intersection of Route 35, Route 36 and Wyckoff Road. A residential development is off Wyckoff Road across from the mall.

One concern expressed by residents during the hearings was that Grant Avenue, near the mall, would see an increase in traffic as residents of the new apartments become familiar with the neighborhood.

All testimony from professionals representing the applicant and objectors was completed during previous hearings. The July 16 meeting allowed members of the public to make final statements regarding the proposal, before board members voted.

Many residents who spoke, most of whom live near the mall, repeated comments they made during previous hearings when they asked the board to reject the application because of what they described as the negative impact it would have on Eatontown and on their quality of life.

Following public comment, board Chairman Mark Woloshin made a motion to approve the Monmouth Mall application.

Prior to voting “yes,” Woloshin said, “Although some of you (residents) disclaimed a lot of stuff, indicating we’re doing things wrong, we depend on all of our professionals to set us straight. Is this the right project for the right property? Compared to what is there now and what it could be, yes.”

Borough Councilwoman Bridget Harris, who sits on the board, was the last member of the board to cast her vote.

Harris said the number of apartments that were proposed was “excessive” and encouraged the applicant to consider downsizing the number of units to better accommodate residents who live in neighboring developments. She then voted “no” on the motion to approve the application.

In summing up the application before the vote, attorney Patrick McNamara, who represents the applicant, said, “This development has the potential to thrive and grow, and really be a sustainable part of the greater Eatontown community. This project will also provide the essential affordable housing. Those 88 units will go a long way toward helping the (borough’s) affordable housing requirement because of the two-for-one rental bonus (Eatontown) will get.”

In addition to constructing an apartment building, the applicant plans to remodel, renovate and repurpose the Monmouth Mall for commercial and retail use. Representatives of the applicant said the redevelopment will help revive the shopping center and encourage economic growth to “survive and thrive during the age of Amazon.”

In addition to residents who made closing comments and expressed apprehension about the plan, dozens of union workers made their first appearance before the board and spoke in support of the application.

Feliz Morello, who has been a resident of Eatontown for more than 28 years and is a member of the Operating Engineers Local 825, said, “I think this is going to be a good project after watching this mall deteriorate. I wanted to put my word out there that I approve this project.”

Resident Darnell Dechalus-Turbin said, “I have witnessed the entire town of Eatontown modernizing, while I have watched the mall stand still. I am a part of the union, but I would like to see some modifications made to the mall. Not only that, but this will create new opportunities for the community to make jobs for the residents. The tax revenue is one of the biggest resources in the town. Maybe we can take a leap into the future.”

The board also heard from residents like Linda Thatcher, who had addressed the panel on previous occasions and took her final opportunity to say, “Why are you going to put the apartments over by the side of Sandspring Drive with residential people who have lived there for years? Move them (the apartments). If you have to put (the apartments) in, move them.

“And why do they have to be seven stories high? Why do we need a city in a little urban town on a small plot of land? Move the apartments to the other side (of the property), spread them out and don’t make them seven stories high. Those people (living in the Heights of Monmouth) are going to be looking into my bedroom,” she said.

Sarah Breslow, another resident who had commented during previous meetings, read from a statement and said, “The majority of residents oppose this project in its current form. Never before in Eatontown’s history has this number of residents consistently turned out to oppose a project at every stage. Unethical behavior has caused the public to lose faith in the process that was created to protect them.”

Breslow was one of four residents who retained attorney Edward Liston to object to the application. During previous meetings, the board heard from professionals who testified on behalf of the residents.