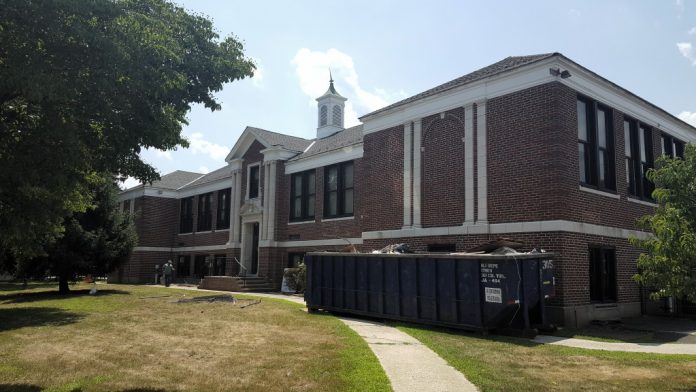 FARMINGDALE – Renovations to the Farmingdale Public School are anticipated to be completed by the beginning of the 2018-19 school year. The borough’s only school educates about 165 pupils in pre-kindergarten through eighth grade.

A $4.81 million referendum that proposed a series of renovations at the school was approved by voters during a special election in September 2017. The vote total was 156 “yes” to 119 “no.”

“We are proceeding forward with the construction and the renovations,” Business Administrator Karen Minutolo said this week.

Work at the school on Academy Street began in June and “we are anticipating projects that are in place right now to be completed by September,” Minutolo said.

She said there is a lot going on at the school.

“We are on schedule, we are starting to move with some window replacements. Tiles are pulled up, there are rugs pulled up and we are starting to square off the main office and create the (security area) … they have the offices pretty much framed out,” Minutolo said.

Prior to the 2017 referendum, the most recent renovations at the building were made 25 years ago when the middle school wing was added. School administrators said the current equipment and facilities were at the end or beyond their useful life and were inefficient.

School administrators said they believed asking residents to approve the multimillion dollar referendum was a more cost-effective approach than a “pay as we go” method for individual repairs and upgrades which would have been more costly and taken longer to complete.

State funding will cover up to 40 percent of the project costs, according to the board.