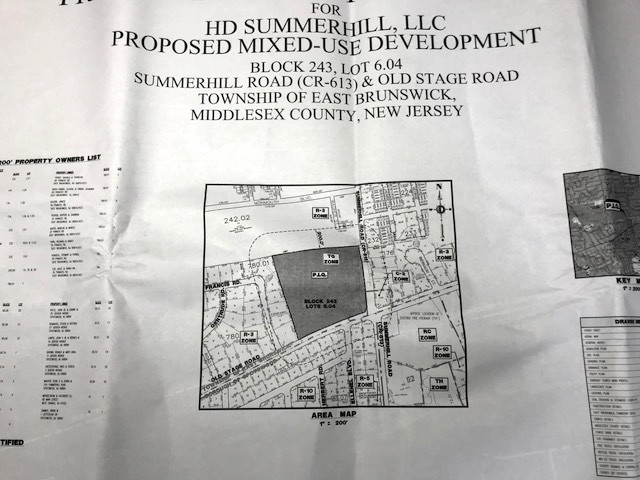 I have been following the events of the proposed Golden Corner construction site on the intersection between Summerhill and Old Stage roads since becoming aware of the sale and rezoning of the property. Unfortunately, although I live very close to the proposed building area (my house borders Frost Woods), I was completely unaware that any of this had occurred until recently.

I have many concerns regarding the proposed construction. First, the addition of 120 apartments would very conservatively add at least 240 cars, not taking into consideration additional visitors to the area. That, along with the increased influx from two heavily visited businesses, and traffic from garbage trucks, buses, etc. would quickly overwhelm the proposed 291 parking spaces and add hundreds of motor vehicles to an already overcrowded traffic area. This would not merely be a huge inconvenience to the residents in East Brunswick, this presents very dangerous situations with potentially catastrophic results.

The argument by the Summerhill LLC representative that children will not be present since the apartments will be rented out by the empty-nesters and millennials is so ridiculous, it’s actually insulting. Being the mother of three college educated children, I can assure you that most millennials do not earn near the estimated income required to rent these apartments and would not be able to afford the rent. I also find it hard to believe that empty-nesters would be interested in moving from their present residences to this overcrowded, noisy, congested area. The renters will rather be families with children. The increase in traffic and children to the same area presents a dangerous situation. A child may be hit by a car in the parking lot, since there is no designated safe play area for children in the plans. Another catastrophic scenario may occur when a young child runs into traffic while playing since, once again, there is no designated safe area for children to play in.

According to the school transportation rules, elementary students (pre-Kindergarten through grade 8) who live more than two miles from their public school of attendance or secondary students (grades 9-12) who live more than two-and-one-half miles from their public school of attendance are entitled to transportation from home to school and back. Children living in this area would not qualify for bus transportation to their elementary and middle schools. This creates a scenario where children will be walking/riding bikes on a heavily traveled road. Years ago, the transportation board decided to stop providing busing on Summerhill Road from the townhouses to Irwin Elementary School. This decision was reversed weeks later when a pedestrian was hit by a car and killed while walking her grandchild to school. It is my fear that this event will be repeated since the same layout is being set up on a much busier portion of Summerhill Road.

Impinging on one of the last few wooded areas in East Brunswick would take away the natural habitat for so many animals living in the area, most concerning being the deer, forcing them to cross the roads looking for food. This is a public safety issue since the risk of injury or even death from driving into one of these animals will be greatly increased.

Very few of these concerns were addressed at the last Zoning Board meeting, as a representative for the survey company was not present. However, the representative for Summerhill LLC and his lawyer were unable to answer simple public safety concerns, like “Are East Brunswick fire companies equipped to reach residents living in a four-story building?”. Other concerns, such as how increased pollution will negatively affect the health of the local residents and how the loss of trees and vegetation will increase flooding and risk of drowning in adjoining neighborhoods, have also not been addressed. It is obvious that absolutely no forethought about public safety and human life has been given to this project. This is a public health catastrophe and I am angry that the purchase and rezoning of this land occurred without notifying the residents of the town. My feeling is that these transactions happened secretly and underhandedly, without the input from a single East Brunswick resident.

I present the above concerns not only as a concerned citizen, but as an expert in trauma care. I have been working in trauma for more than two decades and am a board certified critical care registered nurse at a nearby level one trauma center. I have worked in the Emergency Department, in the Surgical Intensive Care Shock Trauma Unit and have also worked as a nurse manager in Shock Trauma SICU. I speak of the above concerns because I have personally seen each one of the scenarios play out.

As a taxpayer (a very high taxpayer) I feel that I should be comfortable in my own neighborhood. East Brunswick residents have a right to feel safe and the East Brunswick boards and commissions have an obligation to ensure that East Brunswick citizens are not put at increased danger. Somehow, this wrong needs to be made right before someone is greatly harmed or killed.