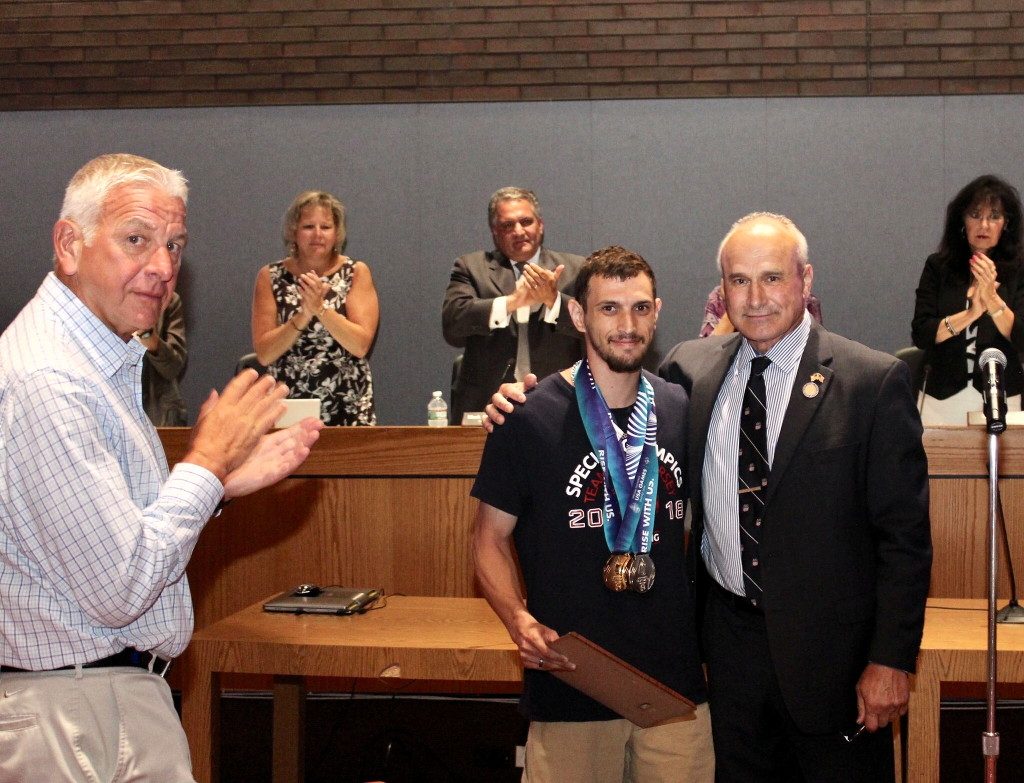 OLD BRIDGE — Watch out Michael Phelps, Michael Lehrer is another “fish in the water.”

Lehrer won two gold medals — one in the butterfly and one in the team relay — and a silver medal in the breaststroke. He also garnered a fourth place finish in the freestyle.

“Michael Lehrer has become the pride of Old Bridge,” Henry said. “What an honor it is to know that out of 4,000 athletes in the Special Olympics USA Games Mr. Lehrer represented us. Mr. Lehrer has proved to the nation that great things come out of Old Bridge. There is no doubt in my mind that we will continue to hear great things about Mr. Lehrer.”

The Special Olympics USA Games, which celebrated its 50th anniversary this year, consisted of 4,000 athletes and coaches and represented 50 state programs and the District of Columbia, which competed in 14 Olympic-type team and individual sports. Lehrer was one of 60 Special Olympic athletes who represented team New Jersey.

Henry introduced Lehrer at a council meeting on July 9 and officially presented a proclamation to him on Aug. 6.

Lehrer, who was born and raised in Old Bridge, said he had a wonderful time representing Old Bridge and New Jersey at the Special Olympics Games and thanked his coaches and team.

“I raced [against athletes] from 50 states … it was so, so tough, but I made it through,” he said, adding there were a lot of cool athletes he met.

A video of Lehrer’s races was played at the meeting, which showed the excitement of the games.

Henry said Lehrer is a dedicated and hard working athlete, who has been competitively swimming for about five years. He has won 49 Special Olympics medals for the Old Bridge Robin Swim Team, many of them gold. He swims all four competitive Olympic strokes, but specializes in breaststroke and butterfly.

Henry said Lehrer also works full time and had practiced five times a week leading up to the games.

“Michael is more than a special athlete, he’s a special person,” he said.