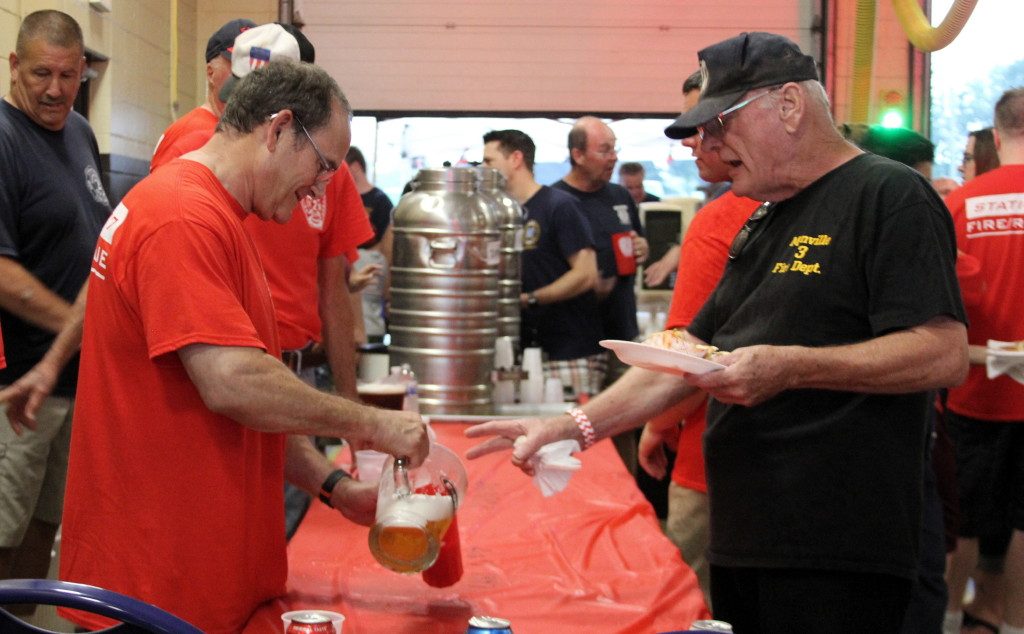 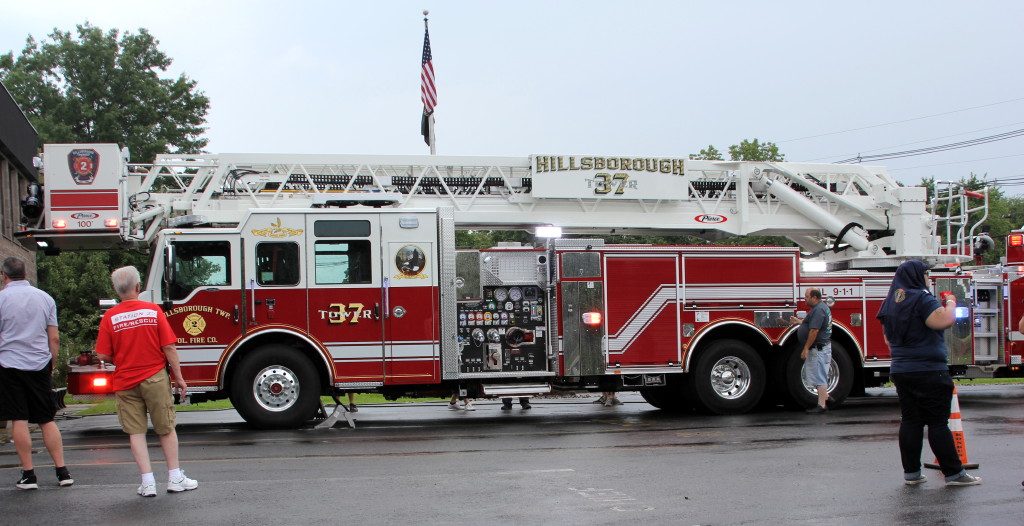 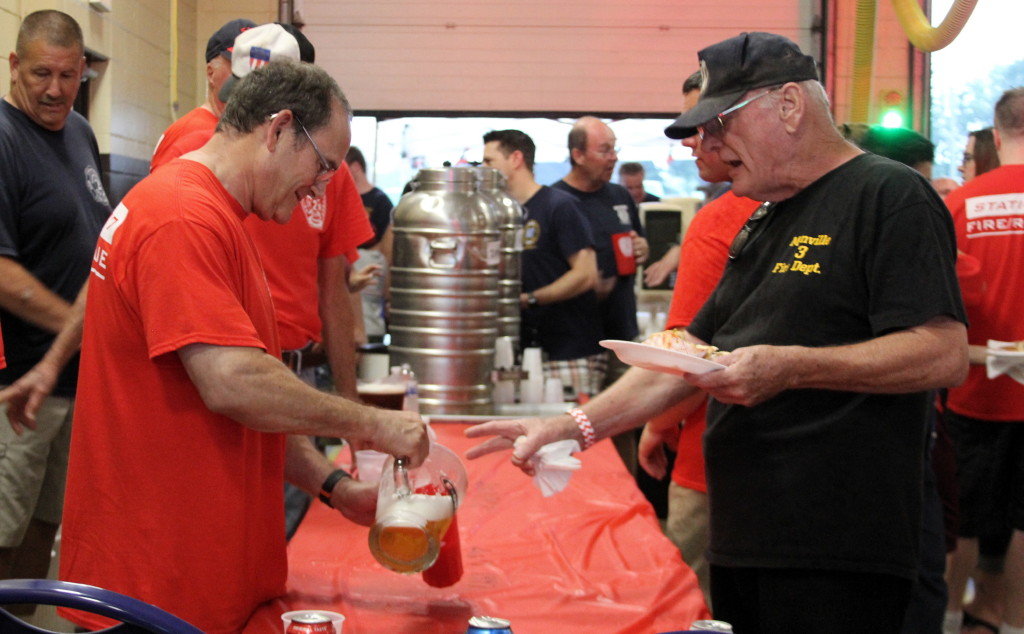 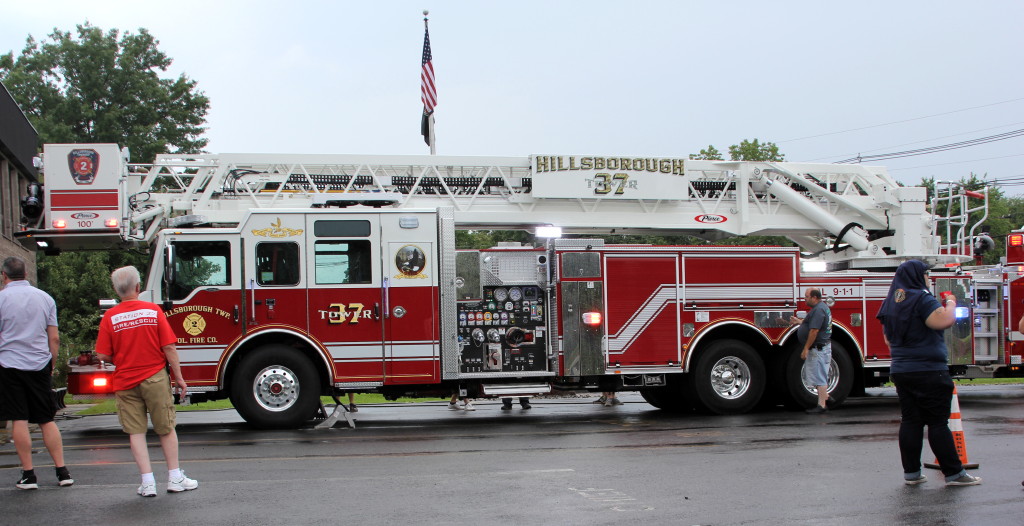 Earlier this month, members of the Hillsborough Township Volunteer Fire Company No. 2 Tower 37 were joined by the general public for an event that generally only takes place once every two decades – the introduction and dedication of a new fire truck.

Coming with a $1.3 million price tag that had been previously budgeted by the Hillsborough Township Board of Fire Commissioners, the new tower ladder apparatus was front and center on August 11.

“The dedication of this truck was almost like the combination of a baby shower and a homecoming,” Lieutenant Rob Clougher said. “This new, beautiful piece of equipment will protect our fire fighters and protect the community.”

The new truck boasts a 100 foot ladder, an internal pump to draw water from fire hydrants and an internal 200 gallon water tank, among a litany of other modern features.

“We’re essentially upgrading our equipment to the new, latest and greatest technology – not only does it involve tech, but it includes a lot of great safety features that the old apparatus didn’t have,” Clougher said. “This thing is even beyond what he had with some of our newer apparatus from as recent as 2007.”

For the last two years, Clougher said the design and eventual purchase of the new truck has been a major project for the fire company. Since February 2016, officials have been working with Wisconsin-based Pierce Manufacturing to hammer out the details of a truck that’s supposed to last until at least 2038.

“It’s a big deal to be able to get something like this – especially considering how much the town has changed over the last 25 years,” he said. “You have to think about where we’re heading and you have to make sure the truck is able to meet the needs of the town and its growing population.”

Fire trucks have an average life span of 20 to 25 years, based on both the vehicle’s frequency of use and existing federal regulations.

When choosing which features the new truck would have, Clougher said the fire company and its members “really dug into what it was that we wanted this truck to do.” All the board of fire commissioners required, he said, was that the company was replacing a ladder truck with another one of the same type.

In addition to the tall ladder and internal systems, officials said the new truck features the largest bucket at the end of the ladder available to allow for multiple people to be in it at once. During a rescue operation, Clougher said, a larger bucket would make it easier to help people get down to safety.

The truck also sports new features that allow it to navigate some of the township’s tougher roadways, given its size.

“For us in Hillsborough, being that we’re changing from this big rural farmland area into more compact housing, all ladder trucks have a lot of difficulty traversing the tighter spaces,” Clougher said. “The newer features on this ladder truck will allow it to maneuver in and out of the tighter streets.”

After finalizing the details in 2017, the fire company didn’t receive the final product until May 26. From then until the end of July, fire fighters were tasked with getting acclimated to the new vehicle.

“There’s so many aspects of this truck that are beyond what we were dealing with before that we needed extensive training in order to ensure that our members are safe, they know understand the capabilities of this vehicle and to make sure we’re getting the maximum efficiency out of it,” Clougher said.

According to officials, the board of fire commissioners opted to go through a local co-op of emergency services from nearby municipalities that have pre-negotiated prices with vendors, rather than go out for multiple bids.

Clougher said that decision ultimately saved taxpayers in the long run, since the commissioners budgeted for the new apparatus. The commissioners put down a $500,000 deposit and then set up a two payment system that hadn’t begun repayment until the truck was received and checked for proper functionality by the fire company.

To further reduce the cost of the truck, Clougher said the old apparatus it was replacing was sold to another nearby agency.

“We’re just ecstatic about the fact that our commissioners have been great with allowing us to make the decisions that we want,” he said. “We can’t thank them enough for their foresight in budgeting for this apparatus.”

Though last Saturday was its official coming out party, Clougher said the new truck has already been out on several calls, with its first bit of action stemming from a smoke condition at a residence on Falcon Road on July 31.

“[The truck] wasn’t needed, but it was exciting that its first call could have been something that was significant where the ladder could have come in handy,” he said. “It’s a good thing for the homeowners that it wasn’t the case, but that was a fun time to take the ladder out on its first official call.”