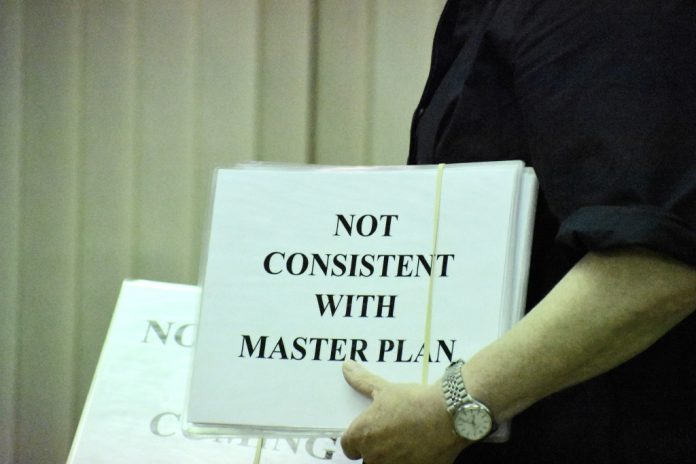 Middletown Township Committee members have unanimously adopted an ordinance that establishes a redevelopment plan for a 100-acre property on Route 35.

The site, which is located at 853 Route 35 in Middletown, is currently home to Circus Wines, Beer & Spirits and is the former location of a Foodtown Superstore.

The redevelopment initiative is an effort led by National Realty & Development Corp. The  redevelopment plan is designed to accommodate up to 400,000 square feet of commercial space and 320 rental townhouses on the site.

Of the 320 rental units, 80 units would be set aside as affordable housing for individuals whose income meets certain guidelines, officials said.

According to the ordinance, the property on Route 35 is an area in need of redevelopment and has been zoned to accommodate residential units.

During the Aug. 20 Township Committee meeting, Middletown’s elected officials indicated that they might reduce the scope of the redevelopment plan if they voted to deny the ordinance. The meeting ran six hours as residents commented on, objected to and asked questions about the ordinance.

Residents were uncertain about what the committee members would be voting on that evening. They were not pleased even though the retail scope of the plan had been reduced from 1.7 million square feet to 400,000 square feet, since the plan was initially proposed for in 1994. Residents questioned the need for additional development in the municipality.

“Our job is to develop an overlay zone (for the property) that is as restrictive and as small as possible,” Mayor Kevin Settembrino said.

“There are forces out there that want us to build a lot more (affordable units),” Mercantante said. “When we are in court, we sort of have a gun to our head.”

Settembrino said the matter that is on the table is far from completion.

“This also has to be within the realm of the rights of the property owner to develop that property … Something will get developed there. We have to make sure (the plan) has as small of a footprint and the least amount of impact as possible,” the mayor said.

Settembrino said details of the redevelopment project — such as landscape buffers, the number of vehicles the site will produce, and environmental aspects — will come together and be discussed if and when an application goes before the Planning Board.

“The only thing we can control is reducing (the plan) or leaving it at 400,000 square feet. We don’t dictate if they are going to build a food store or if they are going to build a movie theater … The issue is, we can’t force a developer. All we can do is change zoning to potentially restrict it or allow the current zoning to continue,” Fiore said.

Residents called the redevelopment plan a “high-density” effort to overdevelop Middletown and said they were not in favor of the plan as it stood.

Those who spoke expressed apprehension about a potential increase in vehicles traveling on local roads, the lack of open space they said is outlined in the site plan, environmental factors, visual buffers and security, among other concerns.

Resident Jeff Thompson said he examined malls around the state and wanted to ask specific questions about how the property on Route 35 would be developed.

Settembrino said Thompson should ask his questions if and when an application for development is presented to the Planning Board.

Elaine Lent, a member of the Old First Church, Kings Highway, said, “We (church members) are unanimous in our opposition of the development. The impact of the proposed development will have negative effects at our church. The traffic related to the mega-development would provide a dangerous excess of cars.”

At 1:30 a.m., in a roll call, Settembrino, Fiore, Committeeman Rick Hibell, Committeeman Anthony Perry and Committeewoman Patricia Snell voted to adopt the redevelopment plan as outlined in the ordinance.