For the next four months, Exit 82 theater company instructor Nicole Grassano will teach the evening class.

According to Grassano, in the last four years the company has been implementing programs for children. This creative drama class is for children in grades two through six.

“You are getting an acting class. It is focused on embracing your creativity and thinking outside the box. It is usually a smaller group,” she said.

Games and exercises are taught to get the children to work as a group. She said creativity exercises she has learned over the years focus on making the class fun and exciting.

According to Grassano, one exercise sets a scene and the children must act the scene with the emotion Grassano wants. She said the exercise helps the children become more expressive.

Improvisation is another exercise Grassano uses in the class. She lets the children create a scene and act it out between themselves with no boundaries.

“That type of a game allows you to be super creative and expressive. It helps create a world of your own and how you would act in it. It also helps them learn to be over-the-top expressive,” she said.

She said the primary goals for the class are to help children try something new, meet other children and help them to learn outside of a school and sports environment.

According to Grassano, the class typically has five or six children. She said there is no limit on the number of children who can take the class.

Grassano said she has seen children who are quite shy take the class and over time become some of her most expressive students when they act out scenes and exercises with other children.

Grassano has been a part of Exit 82 for six years. In the last four years she has become even more involved in the programming at the theater company.

“Teaching the children and seeing them grow out of their shell is so rewarding for me, especially with the kids who are so shy. It is like night and day. From day one it is just crazy to see how far so many of these children grow,” she said.

The program costs $350, plus a $25 registration fee. For more information, visit www.exit82theatre.com. 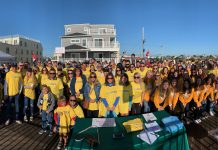