Along with this week’s Hillsborough Dukes football games, we also had our conference cheer competition where the Dukes Cheers completely swept the competition.

The Hillsborough Dukes JV Cheer team hit the mat with a bang at their first competition of the season. On Saturday, Oct. 13 they competed at the Jersey Valley Conference Cheer Competition where they took first Place in their division. They also took home awards for Highest Stunt Score, Highest Jump Score, Highest Choreography Score and were named Grand Champions (highest overall score of the day). Their win has advanced them to the Eastern Region Championships taking place at the Cure Center in Trenton on November 10.

For the second time in as many weeks, the Hillsborough Dukes JV football team traveled to Newark on Sunday, this time to battle the Jackie Robinson Pop Warner Bears at Untermann Field. It was a productive journey for the Dukes, who notched their fourth consecutive win with a 12-6 victory over the Bears improving their overall record to 5-2.

With less than three minutes remaining in the second quarter, quarterback Jack Moran connected with Zion Harrison on a 45-yard touchdown pass to give the Dukes a 6-0 lead going into the half. Later in the fourth quarter, the Dukes would take to the air again with Moran finding Luke Scott on a 60-yard touchdown pass.

Speaking from the sideline after the game, Dukes football Commissioner Jay Scott said, “I wouldn’t have believed it if you told me in the pre-season that we were going to travel to Newark in weeks six and seven, give up one touchdown and log two victories against out-of-conference Newark opponents. Coach Spinelli has this team firing on all cylinders at precisely the right time heading into conference playoffs”

The Hillsborough Dukes JV team has one final out of conference game before hosting the Jersey Valley Conference Championships at Hillsborough High School on Sunday, Oct. 28.

The Dukes Flag team played their seventh game of the season Sunday with a solid performance on the road against the Manville Jr. Mustangs. The offense scored four times with touchdowns by John Billings and Jaxxon Lugo. Dukes fans showed up in full force to cheer on their team, especially the huge runs by Michael Ercolino, Josiah Malek, Kyle Parks, Amore Vagi, Jace O’Donnell, Harry Bugal III and Jackson Karsay. Offensively, there was great effort by all the players.

The Dukes proved to be tough on defense with multiple flag pulls by Travis Hill, Matthew Fedora, Karsay and Billings. Uriel Bogantes, Michael Biviano and Bryant Basilone were key in the Dukes ability to hold the defensive line.

The Dukes Flag team played exceptionally well despite the chilly weather. They will play their last game of the season on Sunday, Oct. 21.

On Sunday, the Dukes traveled to Manville to play the Jr. Mustangs. The Dukes improved their record to 6-1 for the season winning 30-6.

The Jr. Mustangs took an early lead in the beginning of the game, waking up the Dukes defense. The defense, led by Frankie Cocuzza, Aiden Glennon, Bryce Hayden and Ryan Spinelli, enjoyed a forced fumble by Caden Walinsky and recovery by Gavin Glazewski. The team held strong from that point forward stopping the Jr. Mustangs from reaching the endzone again. Sanjay Mills added a defensive touchdown with a 45-yard interception return.

The Mitey Mite team will be playing a playoff game at Hillsborough High School on Sunday, Oct. 21.

On Sunday afternoon, the Hillsborough Dukes Pee Wee team went on the road to compete against local rival the Flemington Falcons. This was the second meeting between these teams with Flemington having won the week two matchup 8-0 at Hillsborough High. This time it was the Dukes returning the favor upending the Falcons 12-6.

With the score 0-0 and the Falcons driving, Defensive Back Peter Sorbera jumped the passing route and tipped the ball away from the receiver. Safety Cole Hayden made a great play catching the deflection out of the air and returning it all the way for a touchdown to take the early lead.

The Dukes continued to drive the ball on offensive with great runs by Dylan Downey and Peter Sorbera behind a tough offensive line led by Julian Brunelle, Jake Susan, Zion Grant and Viktor Nedeski. But it was Cole Haydens pass to Peter Sorbera which gave the Dukes a 12-0 lead. A late charge by the Falcons cut the lead to 12-6 but once the Dukes recovered an onside kick it was victory formation for the offense.

It was a great performance and team effort from the Dukes on Sunday and they hope to build on for their next opponent of the season. 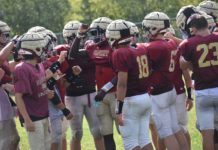