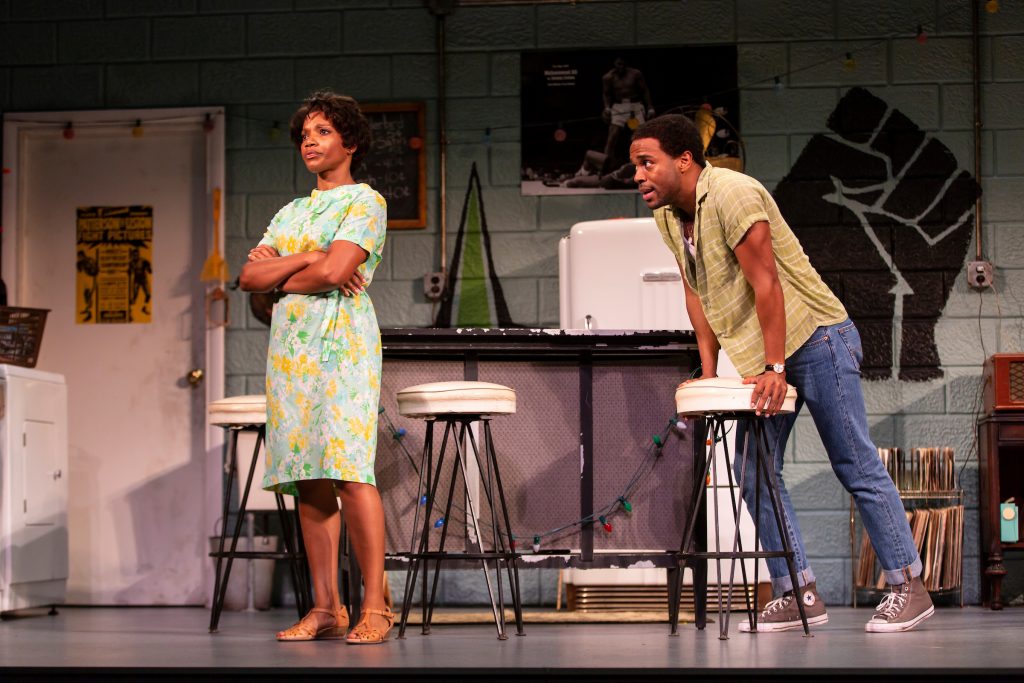 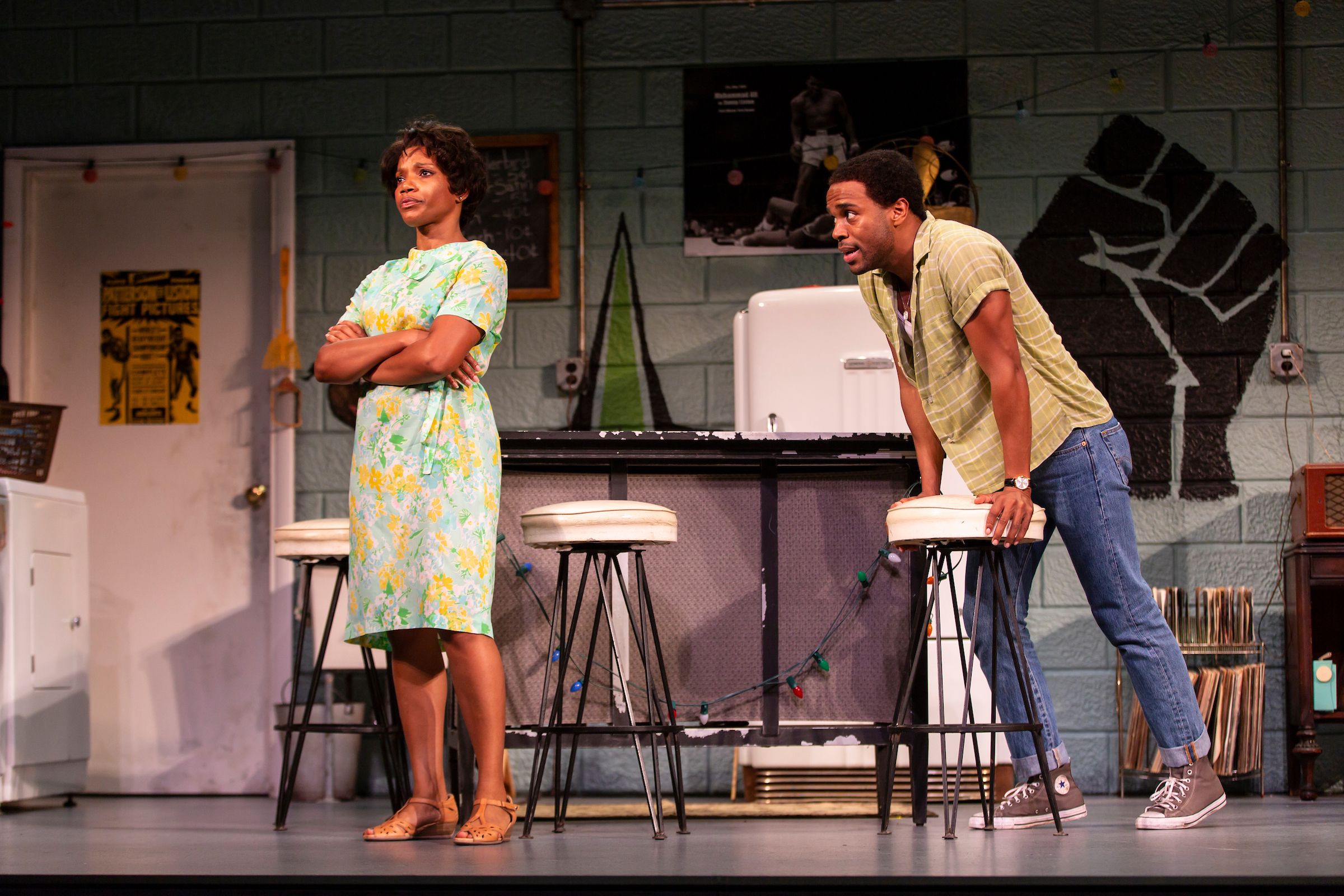 The McCarter Theatre Center continued the 2018-19 season with an original play from writer Dominique Morisseau, “Detroit ’67.”

The play opens on Chelle (Myxolydia Tyler), a young black woman who is sitting in a basement listening to her records. Her basement walls are covered in original artwork from a giant black fist symbolizing black power to what appears to be a child’s artwork of birds and monsters.

Chelle begins to sing-along to her records, but they start to skip. She goes back and forth attempting to fix the needle on the player, but the player insists on skipping.

A box of Christmas lights sits on a coffee table in the center of the basement and Chelle begins to unravel them. A knock comes from the top of the basement staircase and Bunny (Nyahale Allie) enters the stage.

Bunny says she heard Chelle was throwing a party for the upcoming weekend and has come to offer her assistance. Chelle mentions her and her brother, Lank, have had to lay low on their late-night parties these past few weeks after they had to move following their father’s death.

The two discuss the inheritance Chelle and Lank were left with and Bunny asks her what she plans to do with the money. Chelle talks about her son, Julius, and how she plans to put all of their money toward his tuition.

Bunny then asks where Lank is, and Chelle tells her she sent him out to get supplies and new records for their party.

You hear noise coming from upstairs and Lank (Johnny Ramey) appears moments later carrying a box of party supplies. He calls up to his friend, Sly (Will Cobbs), who is unloading the rest of the supplies from their truck.

Chelle goes over to the box he carried down and begins to rifle through all of the purchases, making sure he got each thing she requested.

Sly now enters the stage, coming down the basement stairs carrying another box. Chelle hurries over to go through that box, as well; this time before it can even be set down. She pulls out an 8-track cassette and becomes displeased instantly and questions what she is looking at.

Now growing angry, Chelle wants to know where the 45s she asked for. Lank assures her he and Sly got something better for her and the two exit the basement.

Moments later, Lank and Sly return to the basement staircase carrying a big brown box. They set it on the floor and present the new 8-track player they picked up. Chelle, still dissatisfied at the two, is met with assurances from Lank who insists the 8-track is the next big thing and how it sounds better than any record.

Sly then mentions to Lank that he heard a bar is about to be sold. Lank, clearly acting surprised, begins to question him. Sly continues to tell him the bar and a license are being sold for $15,000.

Now Lank looks to Chelle for her thoughts, but is immediately shut down. He mentions they have that kind of money from their inheritance, but Chelle wants no part in it.

Sly pulls Lank aside and asks if he’s still in on it. He assures Sly he is and just needs to try to convince Chelle a little more.

Sly and Bunny exit as Chelle and Lank continue to set up for their party. Lank, alone with his sister, tries again to convince her to buy a place of their own. Chelle, again, tells him she wants no part in purchasing a business and leaves their home to go to the liquor store as Lank is left to set up the 8-track player.

The next scene begins and it is clearly night. The basement is dark and empty, but we can hear some shuffling coming from upstairs. Lank and Sly come down the staircase carrying what appears to be a body.

They set it down on the couch and it’s covered by a blanket. Checking for a pulse, the two are assured the body is still alive. Lank pulls back the blanket and reveals a white woman beneath it. She is clearly injured as the right half of her face is covered in blood.

The two rush to get an ice pack for her head and ultimately wake Chelle, who re-enters the stage. Lank and Sly try to block the view of the body from Chelle, but she sees through them and begins to freak out.

Lank begins to explain how the two were on their way home when they saw her dazed and beaten, about to walk into traffic in the middle of Detroit. Lank says he made eye contact with her and she begged him to help her. After putting her in his truck to drive her somewhere, she lost consciousness.

Chelle begins to treat her wounds. After bandaging her up, she agrees to let her sleep on the couch for the night.

The next morning, we see the white girl wake and show instant confusion as she does not know what is going on or where she even is. Lank comes downstairs with breakfast prepared for her and begins to recount the previous night’s events.

We find out her name is Caroline (Ginna Le Vine) and though Lank gives a background about himself, she gives very little information. Lank offers to drive her somewhere and offers their phone for her to call someone, but we find out she has no friends or family and nowhere to go.

He shows her where the bathroom is and Caroline leaves the scene to freshen up as Chelle re-enters the basement. She begins to question Lank on what is going on with the girl and he explains she has no one. We can see how Lank has sympathized with her, but Chelle doesn’t care and wants her out immediately.

Caroline returns from the bathroom and we now get a full view of her. Not only is her face covered in blood, but her stockings are ripped and she has cuts all over both her legs. Her knees are bloody, as well, and there is dried blood covering her knee-high boots.

Lank introduces her to his sister. He tells her Chelle will help her wash up and put her into some clean clothes. Chelle is seemingly annoyed and asks her again where she would like to go. Caroline reiterates the fact she doesn’t have anywhere and Lank instantly offers her the couch.

Now Chelle loses her fixed expression and begins to take back his offer. Caroline tells them she would only need to stay for a week, just long enough so she can get some money to buy a train ticket. She tells them she will even work for the money, whatever they need. Lank tells her they run some late-night parties and she can help with the bartending. Caroline says she has some experience running a bar and it is settled. Chelle agrees she can stay for one week – no more – and receive the tip money they earn from the party.

Now later in the day, Sly and Bunny return to help set up for the party, which is that night. Sly pulls Lank aside again and re-questions him about purchasing the bar. He tells him the bid is due the next morning and he has heard some other people trying to buy it, as well. Lank assures Sly he will be there first thing in the morning to purchase the bar – with or without Chelle’s approval.

Following the party, the next morning, Chelle counts out the money they received. She hands Caroline the $20 she has earned in tips and we can see Chelle was impressed with the work Caroline put in the night prior. Chelle leaves to go to the store and Caroline is left in the basement.

Lank returns from what we can assume was the bar bidding. He is in a seemingly good mood and we can again assume his bid was successful; he bought the bar. The two begin to talk and we can see a connection between them. As the conversation continues, we learn Caroline is a rare exception for most white people in the ’60s and she doesn’t see color. The two share a moment and as they are about to kiss, Chelle returns and the moment is lost.

The scene changes and the basement is dark, once more. Lank runs down the stairs and begins searching boxes. Caroline, who is sleeping on the couch, wakes and asks him what he is doing. He says he is looking for a flashlight.

Going through all of their belongings, making much noise, his search rouses Chelle, as well, as she comes down to see what is happening. Lank tells her the bars are being raided downtown and he needs to find a flashlight to go out and help.

Chelle tries to talk him out of it, telling him it’s not their problem and Lank needs not to worry about it. He admits he purchased the bar that was for sale and if he didn’t go out to try to calm people down, their $15,000 investment would be for nothing.

Before Chelle could scream at him, Lank tells her she needs to wait until he returns. He takes the flashlight and a baseball bat, exiting the scene as the first act comes to a close.

The McCarter Theatre Center put on a wonderful performance of playwright Morisseau’s production. From the set to the costumes, the show felt authentic to the time period.

The Cast: Each actor played their part flawlessly. Nyahale Allie (Bunny) and Will Cobbs (Sly) provided comic relief to the play in parts that needed it and their characters were very fun. Myxoludia Tyler’s character, Chelle, brought a strong, serious and sensible tone to the show. Johnny Ramey (Lank) humanized the production and gave us a relatable character, and Ginna Le Vine (Caroline), kept us asking questions about her character’s past. Each had a pivotal role of their own and provided audiences with an enjoyable evening.