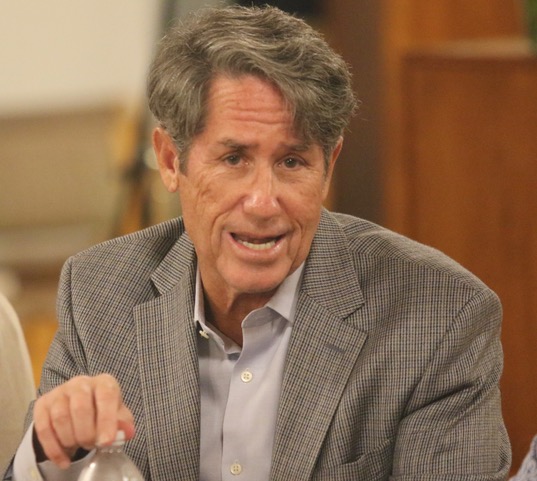 Daniel J. Dart has been a regular at Princeton Public Schools Board of Education meetings this year, someone who is looking to go from an audience member to a policy maker for a growing school district.

He is running for one of three open seats on the board on the ballot in the Nov. 6 election. This is his first time seeking public office.

“My goal is to improve the academic performance as well as the financial sustainability of the Princeton public school system,” Dart said, seated in Hinds Plaza on a recent morning.

During a roughly 41-minute interview, he offered reasons why voters should choose him next month, graded the job performance of the superintendent of schools and touched on some of the bigger issues facing the school district and the community.

Like the other four candidates in the race, he is originally from somewhere else.

Dart, 62, grew up in the West Roxbury section of Boston. He studied business at Boston College, where he earned his bachelor’s degree in 1978, and then worked in the financial industry.

Married, he has lived in Princeton since 2005. He is the father of two daughters: a Princeton High School graduate now attending New York University and a fifth-grader at Johnson Park Elementary School.

“I feel passionate about the Princeton public schools,” Dart said. “I feel I can make a significant contribution to the school board. I feel like I have a unique skill set, experience level, and it’s not just financial.”

At the time of the interview, the board was considering a $129.6 million facilities referendum, a proposal he had opposed. Since then, the board reduced the referendum to $26.9 million.

“I believe strongly in a collaborative approach and am very excited the board is embracing more transparency and inclusiveness,” he said.

Asked for his views of Superintendent of Schools Stephen C. Cochrane’s job performance, Dart gave him mixed reviews. He said he would give Cochrane “a higher than average mark around the educational experience, but I would give him a below average on the financials.”

He criticized a “flawed process” when officials were working toward having a nearly $130 million referendum and said Cochrane bears some responsibility for that.

“You have a variety of people on the board, but I don’t see real depth of finance people,” he said.

In assessing the school district, he faults past and present school boards in Princeton for short-term thinking when it comes to school spending and facilities planning.

“I don’t think the school boards are looking at five and 10 years” ahead, he said, adding that he would bring a forward-thinking approach.

Dart said he sees Princeton University as a resource in helping the district, both financially and academically. On the financial end, he said he would “love” to see Nassau Hall make direct monetary payments to the district; the university already has such a voluntary deal with the municipality. On the academic side, he said he would like to see the university help with closing the achievement gap.

Of relations between the school district and the Princeton Charter School, he said he is for school choice. At a time when the district has said it is facing rising enrollment, he believes the charter school, through expanding its enrollment by 76 students, is “reducing overcrowding.”

“When I see that a charter school is over-enrolled or over-subscribed by three times, I think that’s important, that people in Princeton value a charter school education,” he said. “I don’t think it’s going away, so we should collaborate rather than litigate.”

He said he opposed the decision board members made earlier this year to renew the send-receive agreement the district has for Cranbury students to attend Princeton High School.

“We could relieve potential overcrowding at the high school by eliminating the Cranbury (send-receive) agreement,” he said. “By eliminating Cranbury, you get room for 280  students there.”

Asked if he supports having armed security in schools, Dart said he is against it. If there was a threat against a school, he said he would be OK with police being at the building until the threat ended.