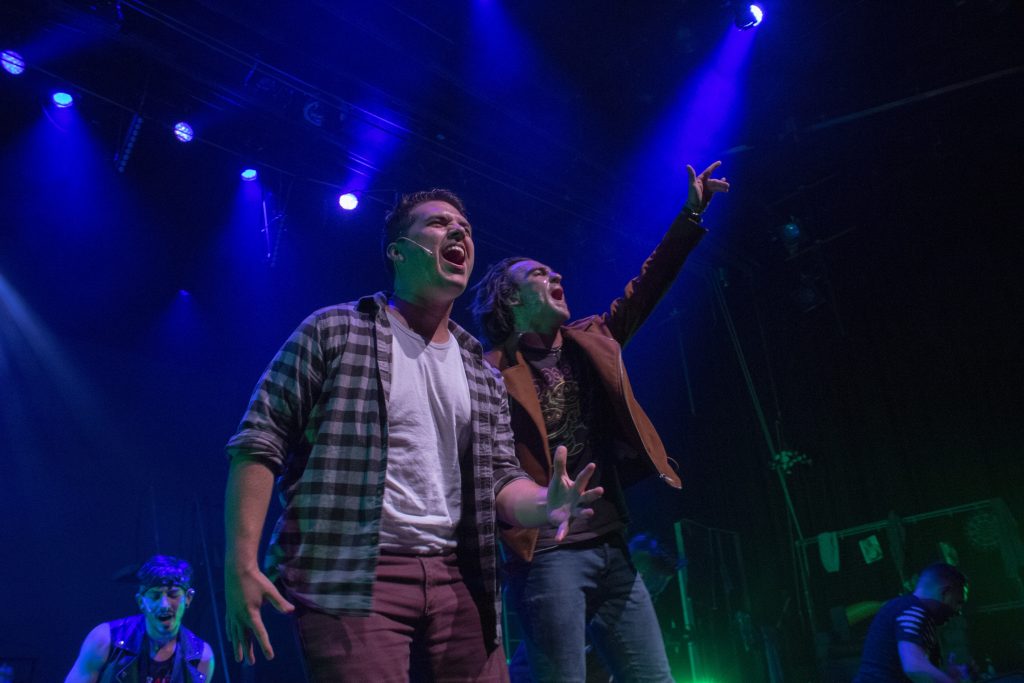 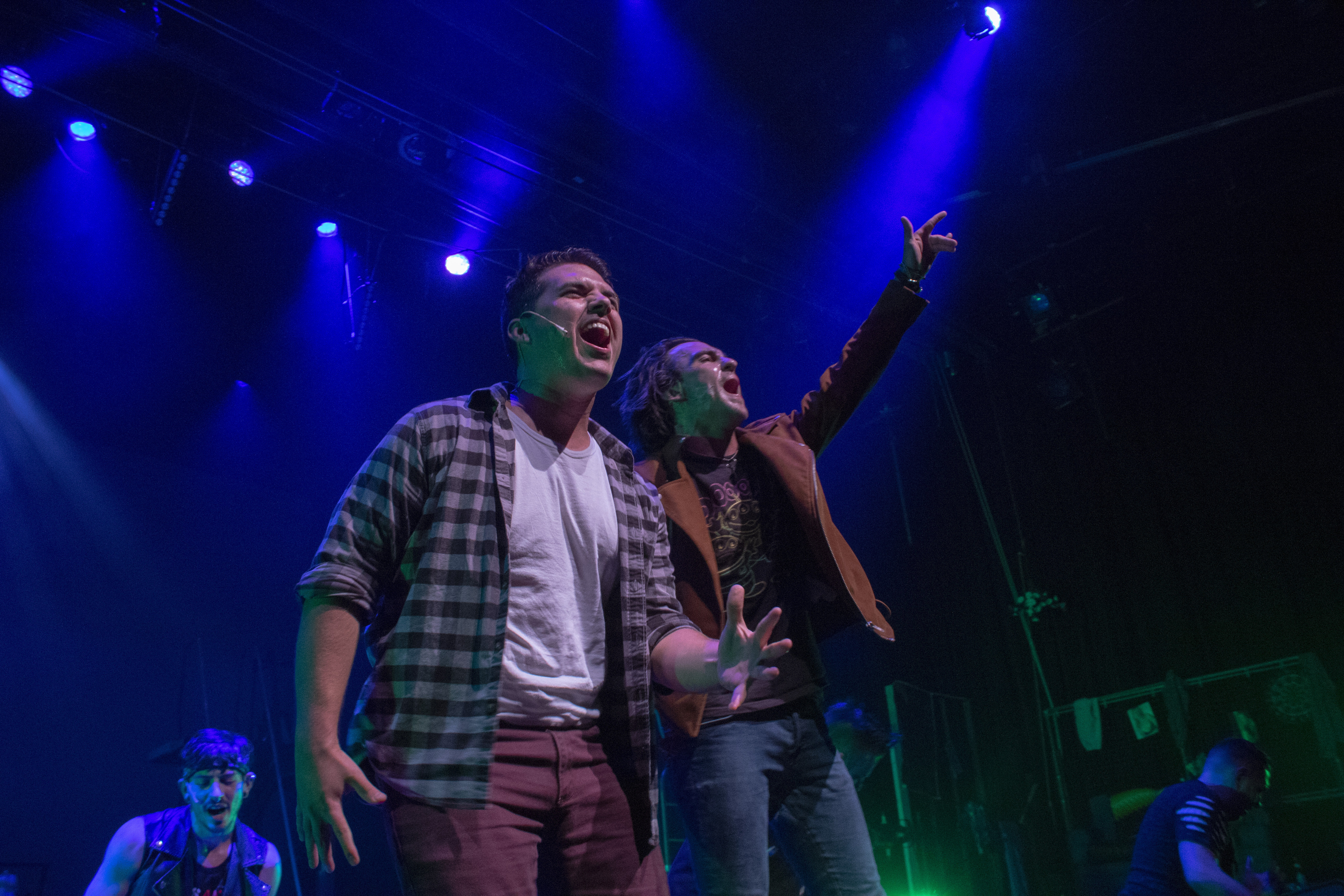 “Green Day’s American Idiot,” a Pennington Players Production, was put on at Kelsey Theatre on the campus of Mercer County Community College in West Windsor.

The musical opens on a group of three young adults: Johnny (Steven Brandt), Tunny (Brian Johnston) and Will (Evan Krug), who currently live in Jingletown, USA. The three are obviously discontent with the way things are in the country and break out into the title song.

The music quickly transitions and Johnny breaks out into a four-part medley, “Jesus of Suburbia.” Through the song, Johnny shares the story of his life. How he has come from a broken home and how he is lost in the current world. Will and Tunny join in on Johnny’s medley and the three feel they are all in the same boat.

Wanting to escape their current lives, Johnny gets money from his mother to buy bus tickets for the three of them to go to the city and start new lives.

Right as they are about to leave, Will’s girlfriend, Heather (Roberta Curless), enters the stage and informs him she is pregnant. Will, not seeing any other option, decides to stay home and raise his unborn child with Heather.

Johnny and Tunny leave for the city, now one short, as they break out into “Holiday.”

Now in the city, what Johnny had thought was going to be such an amazing thing is not. With expectations falling short, he breaks out into “Boulevard of Broken Dreams.”

For Tunny, it is pretty much the same thing and he also finds it hard adapting to his new life in the city. While he is watching television, Tunny views a commercial for the Army, which is portrayed through song “Favorite Son,” and performed by Connor Twigg.

Tunny realizes this is now what he wants to do and wastes no time enlisting in the Army. Through “Are We the Waiting,” Tunny announces his new venture and leaves for the Army.

Back in the city, Johnny begins an awful drug habit. After injecting heroin for the first time, Johnny begins to hallucinate a voice in his head, St. Jimmy (Tia Brown), while performing the song “St. Jimmy.” With his fresh spark of courage from his newfound heroin addiction, Johnny seeks out a girl he has been eyeing, Whatsername (Erica Boyea).

We transition back to Jingletown and find Will on his couch drinking a beer while Heather’s pregnancy proceeds. You can tell he is depressed with his life and would rather be in the city with his friends.

Tunny enters the other side of the stage and we see him being deployed into a war zone. He is quickly shot and wounded, and Tunny and Will perform “Give Me Novacaine” together. The two wish for a pain reliever from the current state of their lives.

We transition back to the city, where Johnny is currently spending the night with Whatsername. Johnny is clearly infatuated with the girl and wants to express his feelings of passion with her. St. Jimmy doesn’t feel the same, and lures Johnny and Whatsername out to a club through “Last of the American Girl”/ She’s a Rebel,” where they take drugs together and later end up in bed.

In bed, Johnny and Whatsername express their feelings for each other and how they each want to live for one another through “Last Night on Earth.”

We return to Jingletown, as Will and Heather’s child has now been born. Will, who has still not moved from the couch, doesn’t notice Heather has now committed herself fully to their child. He continues to drink and smoke marijuana day after day. Through “Too Much, Too Soon,” Heather clearly has had enough and walks out on Will, taking their baby with her. Will is now left alone in a depressive state.

“Green Day’s American Idiot,” was troubled by technical difficulties. What could have been a fantastic show was ruined by issues with microphones. Throughout the last half-hour of the performance, the lead Steven Brandt’s headset went out and you could not hear an audible word from his mouth.

When the crew came on stage in the middle of his performance to hand him a microphone to sing into, they did not realize his headset remained on and the entire theater was filled with feedback from both microphones being held so close together.

The cast and crew spontaneously elected to go with no microphone whatsoever and the closing song, “Whatsername,” could not be heard at all.

This did highlight the live band that performed every Green Day song perfectly, but their performance could not save the production from leaving the sour screech of feedback ringing in my ears as I left the theater.

Connor Twigg. Twigg is listed as someone who was a part of the ensemble, but he did have a solo performance of “Favorite Son.” In my opinion, Twigg was one of – if not the best – performers on stage. Twigg’s powerful voice grabbed the audience in his solo number and he really projected his voice quite nicely whenever he was a part of the ensemble throughout the entire production.

Roberta Curless as Heather. Curless captured her role. Her character defined strong, independent women in the modern day who don’t need a man to get by. You can tell by the stern looks her character gave throughout the production, Curless really cared about giving an honest portrayal in her performance. Not to mention, she had a beautiful singing voice, as well.

“Green Day’s American Idiot,” finished their short run of only six performances at Kelsey Theatre on the campus of Mercer County Community College, 1200 Old Trenton Road, West Windsor. The Kelsey Theatre opens “A Raisin In The Sun” on Friday, Oct. 19. For tickets and information, go to www.kelseyatmccc.org; 609-570-3333.