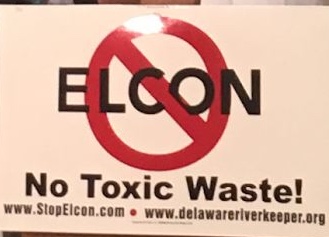 ELCON, a hazardous waste processing company, is actively applying for permits to build a treatment facility in the Keystone Industrial Port Complex, located several miles away from Burlington County.

This past July, the Pennsylvania Department of Environmental Protection (PDEP), stated that ELCON had provided all the required documents and that it would engage in a 10-month technical review.

If the review is cleared by May, the company could potentially import more than 190,000 tons of hazardous waste annually, and burn more than a million pounds of waste a day using thermal oxidation.

In a statement Hughes released after voting for a resolution on Oct. 24 in opposition of the project, she expressed her worries for the health and well-being of county residents concerning potential pollution issues related to the facility.

“I am deeply troubled by the proposed ELCON project which poses serious health risks to not only individuals in Bucks County, but to thousands of Burlington County residents who demand clean air and drinking water,” Hughes said in a statement.

Given the prevailing winds out of the west and the proposed location’s proximity to the county, this facility will have a direct impact on the residents of Burlington County and other nearby communities.

Taking action toward this issue in the past, the Freeholder Board has previously adopted resolutions in opposition of the proposed facility in February of 2017 and January of 2015.

The proposed closeness of this facility to the Delaware River could also have a direct impact on the drinking water supply of millions of residents too, as it serves approximately eight million people in its surrounding areas.

Although the out-of-state location lessens the county’s jurisdiction on the matter, Hughes urged surrounding areas in the region to come together and remain persistent on the issue for the PDEP’s eventual decision.

“As the Freeholder Board has done in the past, we took action again this evening and joined several of our riverfront communities who are opposed to this hazardous waste treatment facility,” Hughes added. “I am urging the Pennsylvania Department of Environmental Protection to consider the negative impacts this development could have on our residents’ quality of life and immediately reject ELCON’s application.”