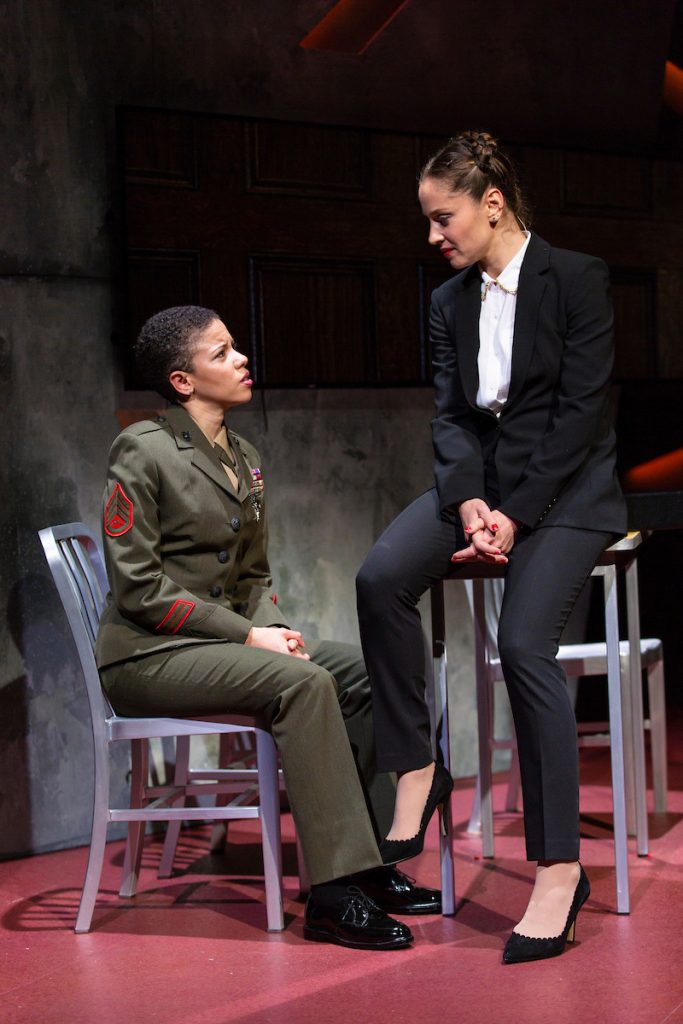 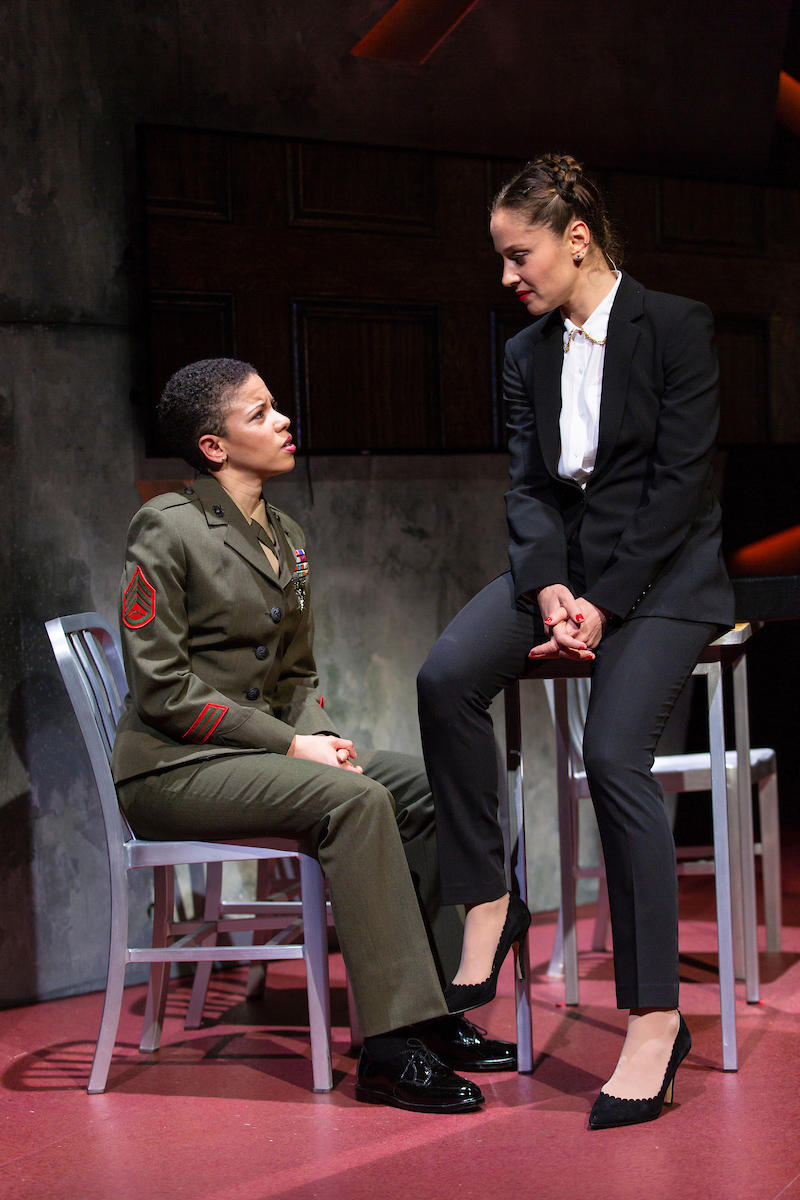 Opening the George Street Playhouse’s second season at their interim theater on College Farm Road comes “The Trial of Donna Caine,” an original play from Walter Anderson, the former editor-in-chief of Parade magazine and current chairman and CEO of Parade Publications.

Inspired by the true story of the 1956 Ribbon Creek incident, the play opens on a breaking news story from CNN regarding the drowning of five US Marine Corps recruits. After a training exercise gone wrong, Staff Sergeant Donna Caine (Flor De Liz Perez) is held responsible for conducting an unauthorized training drill on Parris Island in South Carolina during high tide in the middle of the night.

In Anderson’s production, the US Marine Corps has recently passed an act where men and women are to be trained together. This is to touch on the recent decision to allow women to seek military combat positions.

Civilian lawyer Emily Zola Ginsberg (Margarita Levieva), who is also highly respected in her field, agrees to take Sergeant Caine’s case after meeting with her. Though Caine wants to just plead guilty and be done with the trauma of the events completely, Ginsberg feels she should fight for her innocence.

Now taking on the military herself, Ginsberg vies to prove Sergeant Caine should not be held accountable for the deaths of her recruits.

“The Trial of Donna Caine” brought a fast-paced production that kept audiences on their toes throughout the entirety of the show. From the opening minutes when Caine admits she’s guilty and should be held responsible for the deaths of her recruits, you sit there wondering how Ginsberg can prove her innocence or if she will at all.

With the military being such a prominent part of the play, the tone of the show seemed to reflect that, as well. It seemed every line given was delivered at such a fast pace that didn’t allow you a chance to become comfortable. It was like watching “The Godfather,” in the sense where if you were to zone out for even a minute, you would lose a crucial part to the plot.

The script seemed very lengthy as the dialogue didn’t appear to end. It seemed  every scene was just a conversation between the characters rather than any action taking place; when I say action, I just mean some sort of movement on the stage. The most action-filled scene was when Ginsberg walked into a military bar to stand on a table asking anyone to come forward and speak with the opposing side. But even then, her loud voice dominating the other actors on stage was all the scene had to offer.

Flor De Liz Perez seemed very robotic on stage for most of her performance, but I feel her being a woman in uniform was the cause of this. Her most emotional scene was in the final scene of the first act when she cries into Gunnery Sergeant Jacob Jasper Walker’s (Ryan George) arms and we can actually see Caine is afraid. Losing the stone cold façade, we can see Caine is actually human and we begin to feel for her character. Perez gives a great performance in this scene and we can see the talent that she can offer.

Opposite Perez was Margarita Levieva, who portrayed Emily Zola Ginsberg. Levieva’s character, like Perez’s, is another strong female. In both professions, military and law, we can see both of them have earned respect. Ginsberg who is well-known and highly regarded in her field, and Caine who is already a staff sergeant at a young age. But we also get the sense Caine doesn’t respect Ginsberg even though she is taking on a seemingly un-winnable case. However,  this may come from the fact Ginsberg was never a woman in uniform.

The relationship the two women have together is very enjoyable to watch. We see them not only grow to like each other, but eventually respect each other, too.

Another aspect of the production I also felt was very enjoyable was the set design in the New Brunswick theater. Other than a few tables and chairs on stage, the show did not have a set at all. Now this may seem lazy, but it was actually very cool and even futuristic.

The walls were lined with flat-screened television screens next to each other and each screen changed based off of the scene. On the back wall hung nine screens, arranged in a three by three format, while the left and right walls held two screens each.

When the play opens with a breaking news story from CNN, the screens played the story for the audience. When Caine dreams of the night of the incident, the screens change to tall grass and the night sky. In the bar, the screens held shelves of liquor bottles.

The idea was very interesting and innovative and set designer James Youmans deserves credit for bringing it to life.