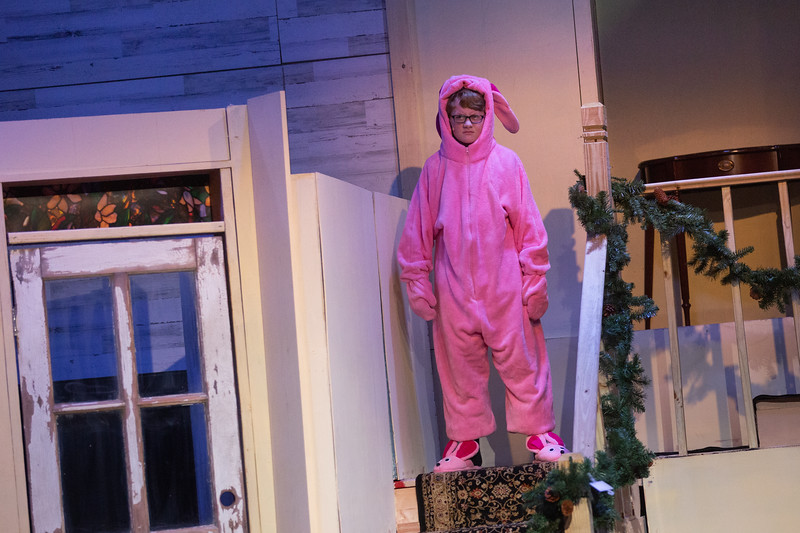 Skyler Carter as Ralphie Parker stands in his pink bunny suit on Christmas morning in "A Christmas Story: The Musical" at Music Mountain Theatre in Lambertville. MUSIC MOUNTAIN THEATRE
×

Skyler Carter as Ralphie Parker stands in his pink bunny suit on Christmas morning in "A Christmas Story: The Musical" at Music Mountain Theatre in Lambertville. MUSIC MOUNTAIN THEATRE

Music Mountain Theatre started off its holiday season with the first of two productions. “A Christmas Story: The Musical.”

The show opened on Nov 9 and will continue through Nov. 25 in Lambertville.

The classic Christmas film from 1983 is brought to the stage and given a musical twist as the local theater put on a grand performance.

Opening on Jean Shepherd as adult Ralphie (Michael Moeller), he sits down at a radio station on Christmas Eve in Manhattan and begins to tell the tale of his younger self in 1940.

We are taken back to Homan, Indiana, on Dec. 1, where young Ralphie Parker (Skyler Carter) is eagerly awaiting Christmas.

The set design throughout the entire production was wonderful. You could really see the time and effort Louis Palena, Karl Weigand and Ryan Carter put into the construction of each scene.

The Parker house, which is where most of the production takes place, looks very similar to the one from the film. Complete with Ralphie’s bedroom in a two-story home, the open layout gave the audience a view into the entire house from his bedroom to the kitchen, the living room and front window.

The opening number, “It All Comes Down to Christmas,” was a fun way to start the show. The singing and dancing were exceptional from not only the main cast, but the ensemble, as well.

Ralphie’s mother (Molly Logan) and his father, The Old Man (Louis Palena), prepare him and his brother, Randy (Finn Grushow), to see the Higbee’s storefront light up with all of the new holiday toys.

The next number, “Higbee’s Window,” was one of my favorite scenes in the entire show and it all had to do with the set. Rolling out a giant storefront window, Ralphie and Randy were joined by other children and their parents as the lights for the new holiday display lit up and every child began to pen their Christmas lists in their heads.

The next scene came the following day as The Old Man informed the audience about his favorite hobby – entering crossword puzzle competitions.

Palena breaks out into “The Genius on Cleveland Street,” which in my opinion was the best part of the show. Palena as The Old Man was the highlight of the entire production. For the second production in a row (previously starring in “Curtains! The Musical” in October), Palena took control of the stage with his powerful, but beautiful singing voice. His commanding presence draws all audience members to him, and he is the center of attention and rightly so.

Later in the production, after winning a lamp in the shape of a leg from a crossword puzzle competition, Palena performs “A Major Award.” With a can-can line dressed as leg lamps behind him, Palena once again left audiences wanting more as applause broke out for him in the middle of the number. Palena steals the show.

Jordan Brennan, the costume designer, also should be given credit for not only “A Major Award,” but for all the costumes, in general. The can-can line featured six women in black leotards, each wearing a stocking on their right leg, while their skirts stretched out looking like the shade to the lamp. Each leg looked just like the lamp.

The costumes throughout the production seemed identical to the original film. From Ralphie’s pink bunny suit to Randy’s snow suit, Brennan made sure each character was authentic.

There was one glaring issue throughout the production that really seemed to take you out of the moment.  Moeller as Jean Shepherd or older Ralphie didn’t seem to have all of his lines memorized. Stuttering over his words for most of the production, Moeller seemed to be out of funk for the entirety of the production.

It was a blight on such an amazing production from both the cast and crew, but it wasn’t enough of a reason not to see the show. Music Mountain Theatre put on a fun and entertaining performance and I highly recommend it.

“A Christmas Story: The Musical,” continues at Music Mountain Theatre, 1483 Route 179 Lambertsville, through Nov. 25. For tickets and information, go to www.musicmountaintheatre.org; 609-397-3337.