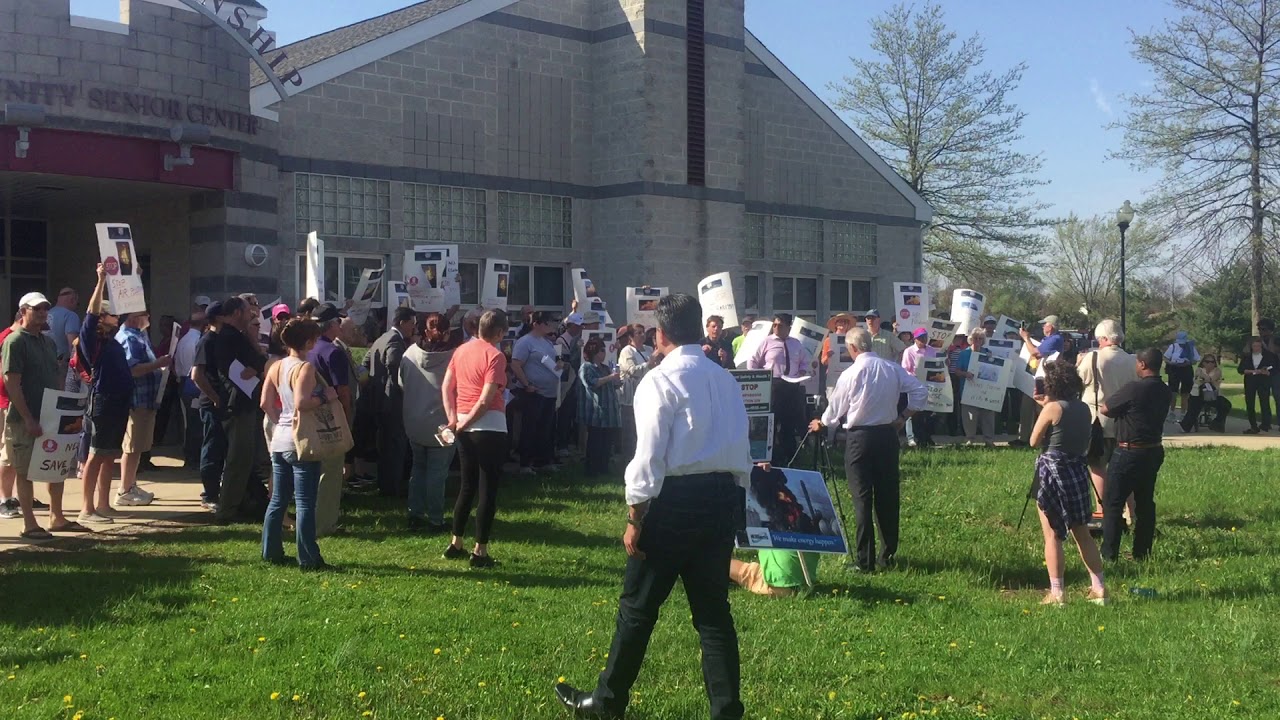 FRANKLIN TOWNSHIP – The debate over the necessity of a natural gas compressor station in central New Jersey continued on Nov. 5 as hundreds of residents, officials, union laborers and stakeholders voiced their opinions about the environment, health concerns and the sustainability of energy in the region.

The Williams Company operates the Transco pipeline, a 10,000-mile interstate transmission pipeline system that transports much of the natural gas consumed in the northeastern United States. The system includes more than 50 compressor facilities and currently features more than 500 miles of pipe and five compressor facilities in New Jersey, according to information provided by Williams regarding its Northeast Supply Enhancement (NESE) project.

The preferred location is a 52-acre tract approximately 1 mile south of the intersection of Route 27 and Route 518; the 16-acre site would be surrounded by a wooded buffer, according to the company.

For about three years, residents have expressed concerns because of the proximity of the proposed compressor station to the Trap Rock Industries rock quarry in Kingston; the potential for clay byproducts to be disturbed during construction; the possibility of leaks, fires and explosions; and quality of life disruptions due to health and environmental concerns.

South Brunswick Councilman Joe Camarota said he is a “cheerleader” for the 1,000 residents who live in the nearby Princeton Walk and Princeton Manor developments.

“Take your personal stories to elected officials,” said Junior Romero of Food & Water Watch. “All of you are going to be affected. Your lives are going to be directly impacted by this.”

Assemblyman Joe Danielsen (D-Middlesex and Somerset) said he was born in Franklin Township and is raising three children. He said he has been involved with sponsoring legislation to counteract the Transco project.

“We are one accident away from our community being at risk,” he said. “We know the track record of Williams Transco is less than stellar … of maintaining the integrity of our land.”

South Brunswick Councilwoman Jo Hochman claimed that when Williams representatives first came to town, they had very little knowledge of the churches, homes, schools and a mosque in the area.

“We can’t afford to have any of this in the environment with so many people in the area,” she said. “Williams knew nothing about the area they were coming to.”

Over the course of several meetings, representatives of Williams have said sound will not be noticeable to nearby residents due to 9 inches of sound-buffering insulation; vibration will not be perceptible to the human body; air quality will not be an issue due to state-of-the-art emission control technology, including Selective Catalytic Reduction systems; and safety is not a factor since the pipeline has safely operated in Somerset County since 1950, the station will be monitored 24/7 by a centralized operations control center and there will be automatic emergency shutdown systems and computerized controls designed for remote operation, according to information provided by the company.

Because of this, several union groups came out in support of the project.

Ciro Scalera, director of government relations for the Laborers’-Employers’ Cooperation and Education Trust (LiUNA), said his union works with solar, wind, pipeline and nuclear energy, and said the NESE project will continue capital investment, ensure the availability and stability of supply, enhance the existing infrastructure, remove millions of tons of carbon dioxide from the air, and be the transition until more renewable energy resources can be expanded.

Chris Hartman, vice president of NJ Alliance for Action, which represents 2,500 laborers, said the project would greatly improve the economy, as most of the natural gas consumed in the Northeast would be carried by this line. He said the $1 billion enhancement would include a state-of-the-art emissions system with the noise impact of a refrigerator, built by local laborers who care about their own homes in the area.

Dan Kennedy, director of Environmental Utility for the Utility and Transportation Contractors Association, said that as a former member of the Department of Environmental Protection, he can say the proposed project is consistent with state and federal guidelines.

However, about 100 residents signed in to speak for three minutes each, with hundreds more in the audience. The most common concerns were the potential for hazardous waste, the disturbance of the environment, the threat to marine and animal life, and the possibility of chemicals in the air and water.

Gabe Spiler said it is already difficult to mow his lawn because it is always wet, and that due to water rising in the back of his house his patio is collapsing. He said he was told he cannot touch the wetlands on his property in order to correct the flooding, so he questioned how it is acceptable for Williams to impact more than three acres of freshwater wetlands for the proposed project.

Jeff Eisenberg, who said he and his wife escaped the “rat race” of New York for the “pristine and bucolic surroundings” of the Kendall Park section of South Brunswick, which is only five miles from Princeton University, said “our contentment may now be in jeopardy.”

He said there are 349 homes 1 mile from Station 206, so this project is “misguided and illogical.”

Kevin Aspell, a resident of Princeton Manor, shared his own health issues. Diagnosed with diabetes at age 8, he said he has suffered from neuropathy, a heart attack, bypass surgery and kidney failure. He said he has had a kidney transplant and a pancreas transplant, necessitating the use of immunosuppressant drugs so his body does not reject either organ. He said he worries for others who are frail or who are susceptible to viruses and infections.

“We don’t want New Jersey being sacrificed for a pipeline we don’t want, we don’t need and we can’t afford,” said Judith Canepa of the Sane Energy Project.

Brendon Shank, director of the Office of Communications for the Department of Environmental Protection, said there is no official statement being made by Williams at this time.