Children across New Jersey soon will have the chance to receive an early Christmas present from the jolly man in the red suit during the fifth annual Santa Fly-In at Central Jersey Regional Airport in Hillsborough.

Santa’s own airplane, the Santa Express, will land at the airport on Sunday, Dec. 9, before he greets the children in the hangar decorated like the North Pole, according to organizers.

The event is presented by the Rotary Club of Branchburg, which revived the 1960s tradition after it was stopped for nearly 10 years.

“I grew up in Manville, and when I was a kid, we would come here to see Santa every year,” said Jodi DiPane-Saleem, Rotary Club member and owner of TriState Aviation, the flight school at the airport. “It was always a memory for me; and when we started the flight school and the first holiday came around, I said, ‘Well, why don’t we just renew that tradition?’”

The children who attend will be encouraged to sing Christmas carols and chant, “We want Santa,” as the plane circles the airport.

After arriving, Santa will present each child with a gift — which parents can drop off at the airport until Friday, Dec. 7 — with the help of airport staff dressed as elves.

In addition to bringing their child’s gift to the airport, parents also will be asked to share something about their child that Santa could include in the handwritten letters — whether it be congratulating a child on a good grade or advising them not to pick on their younger sibling.

Both DiPane-Saleem and Rotary Club President Julie Ann Juliano believe these personalized letters from Santa make the event special for both the children and the parents.

“The looks on the kids’ faces when they’re reading the letter, they’re like, ‘How did Santa know that?’” Juliano said. “That’s what makes it so cool because Santa knows something that nobody else knows.”

The registration fee for the Santa Fly-In is $20 per child; hot dogs, cookies and hot cocoa are included in the fee, and a crafts table will be provided for those waiting to receive their gift from Santa — played by Manville resident Bruce Wessel.

“I dare you to find someone more like Santa than him,” said Juliano, who said Wessel comes equipped with the real, white beard and “stuffing.”

Families are also welcome to take photos of their child with Santa.

Some of the money also will be awarded to a child to attend summer camp at Easter Seals New Jersey, which provides services to those with developmental disabilities.

“We try to give one campership during the summer for one kid to go to camp who could never go,” Juliano said. “A scholarship goes a long way. Anything that we’re doing to enrich or enhance a kid’s life, that’s what we’re trying to go for.”

The Central Jersey Regional Airport is accepting gifts and information for the personal letters until Friday, Dec. 7. For more information, call 908-576-4333. 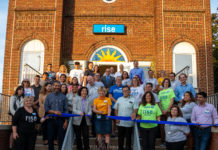