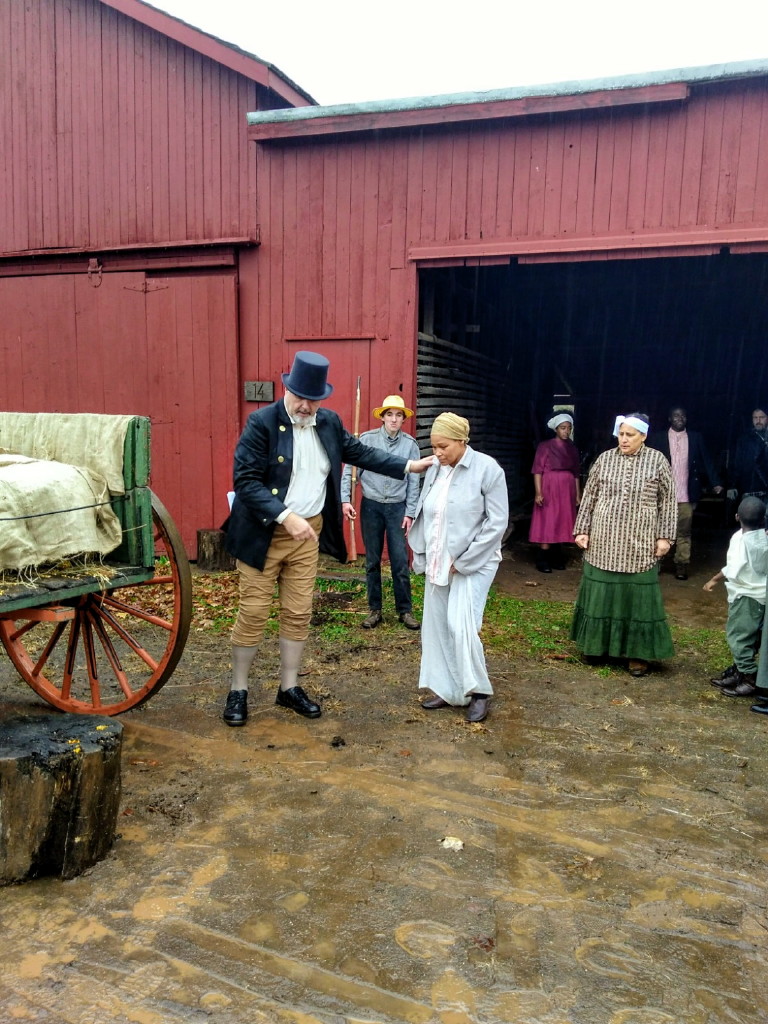 EAST BRUNSWICK–Telling the tale of a young boy kidnapped from Philadelphia to be illegally sold into slavery, historian Rich Walling’s film “Sold South” depicts a teen’s horrific journey at the hands of Judge Jacob Van Wickle.

“‘Sold South’ is the true story of a young African American teen kidnapped from Philadelphia and brought to the farm of Judge Jacob Van Wickle, a local magistrate in Middlesex County, New Jersey,” Walling said. “Told through the voice of William, we follow his journey to Van Wickle’s ‘slave castle’ where more than 30 other African American men, women and children are held under armed guard.”

Using his position of authority, Walling said, “Van Wickle sent those gathered at his farm to a permanent and cruel slavery in the sugar cane fields of Louisiana. Courtroom drama unfolds as the judge threatens the separation of small children from their mothers unless the women also consent to go South. William is the sole captive to be redeemed just before the others are sent away. The film concludes with the story being brought down to the present day, as DNA reunites families north and south, across time and distance.”

Van Wickle was a Middlesex County judge and resident who used his court in 1818 to send nearly 150 African Americans into permanent slavery in the south, according to Walling.

Having written and directed the film, Walling said the film is an independent project of Communipaw Productions, which is his media firm. Walling is a North Brunswick resident but was born and raised in East Brunswick.

Walling said he also coordinated all the sites, costumes and props for the film.

“This project is a creation of my vision and storytelling of an important element of what happened to the approximately 150 lost souls. We do know that the only victim who was saved from being ‘Sold South’ was a young man from Philadelphia,” Walling said. “By telling the story through his eyes, he serves as a witness to this atrocity and as a witness, he is able to tell the audience what happened and how so many innocent lives were destroyed by greed.”

“We had over 35 actors/extras in the film, including about 25 children, ranging in age from four to 17,” Walling said.

The interior courtroom scenes were filmed at the Henry Guest House, which is part of the New Brunswick Public Library. Exteriors were filmed at the Howell Living History Farm near Lambertville. Both sites provided authentic settings for the time period, which is 1818. The Howell Living History Farm also provided horses, wagons and other items to convey Van Wickle’s farm, which was described as a slave castle in 1818, according to Walling.
The anticipated premiere date for the film to be shown will be from 2-4 p.m. on Dec. 16 at the Lost Souls Day of Remembrance program at the East Brunswick Public Library, located at 2 Jean Walling Civic Center Dr., East Brunswick, according to Walling.
Walling also helped spearhead the formation of “The Lost Souls Public Memorial Project,” which is a local community effort to build a public memorial in the township to honor the nearly 150 souls sold into permanent slavery by Van Wickle.
“The footage is now being edited and the soundtrack added. The principle narration is provided by Alan Hendrix, Somerset County resident and member of the New Brunswick Area Branch of the NAACP,” Walling said.
Walling said the film will be submitted to the Tribeca and other film festivals.
For more information about the Lost Souls Public Memorial Project, visit www.bit.ly/2zivbz6 or its Facebook page.
Contact Vashti Harris at vharris@newsapapermediagroup.com.