Photo by Bob Nuse / Freshman Aaron Mumford recorded a pin over Marko Guaman in their match at 132 pounds to help the Princeton High wrestling team to a 40-33 victory over Nottingham on Tuesday.

The Princeton High wrestling team came into the season knowing it was strong in the lower part of the lineup.

For Princeton to be successful this season it was going to need continued development from wrestlers like Chris Sockler, Mikyo Kalabacos, James Romaine and Dominic Riendeau-Krause, as well as some contributions from some newcomers.

Princeton was able to get contributions from some of its newcomers on Tuesday night, when freshmen Aaron Mumford and Jean Henri each came up with a big triumph as Princeton held off Nottingham, 40-33, for its first victory of the season.

“What we have with our experienced wrestlers is good,” Princeton coach Rashone Johnson said. “But like all teams, we just don’t have a lot of guys that have a lot of experience. But where they are we’re pretty solid. The younger guys will learn as they go and get better.”

Princeton got off to a great start against Nottingham as Ayers, Kalabacos, Monahan, Mumford and Bobchin recorded pins and Sockler and Riendeau-Krause added decision wins to give the Little Tigers a 34-6 lead. But a pair of losses and three forfeits left Princeton holding onto a 34-33 lead heading into the final heavyweight bout, where Henri came away with a pin to lift Princeton to the victory.

“I was nervous at first,” Henri said. “I looked at the score and knew I had to do it for the team so I just pushed myself to my limits and see what I could do.”

The victory from Henri, as well as the fall from Mumford, gives Princeton hope that some of its younger wrestlers came make the strides needed to add to the lineup’s depth.

“It was very exciting,” Mumford said of his win at 138 pounds. “I’ve only wrestled varsity one other time and it was a pin. I’m always nervous before my matches, but I felt a little better today. I just went out there and wrestled the same like I would any other match. It felt really good to get six points for the team.”

Mumford is in the same general weight class area as Bobchin, so his opportunities at the varsity level are limited. But he’s had a chance to learn from one of Princeton’s all-time best and hopes it leads to success down the road.

“From watching his wrestling matches I take away stuff from that,” Mumford said.

Johnson can see there is potential there with the younger wrestlers as the Little Tigers look to improve. They fell to 1-7 with a 49-27 loss to Lawrence on Wednesday. Like many of its matches, Princeton was hurt by inexperience at the top of the lineup. But the win over Nottingham showed the potential is there for a solid team.

“Nottingham has had our number the last couple years,” Johnson said. “This was a good win. We have our experienced guys and then we had the freshmen step up.

(Mumford) is a solid wrestler, but he is behind Bobchin in line. I put him in when I have a situation like this where I feel like there is a good spot for him.

“(Henri) is a young boy so we have a lot of time with him. He’s a big freshman. We have to find some big guys. That’s what we need.”

It’s a continuing journey for the Little Tigers, who have their share of top wrestlers. Bobchin and Monahan are returning MCT champions, while Ayers made a solid impression last weekend when she won the 106-pound title at the South Jersey Wrestling Hall of Fame Tournament at Timber Creek. 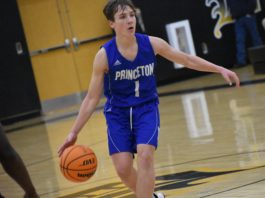 Little Tigers focused on ‘getting better each day’ throughout 2022-23 boys... 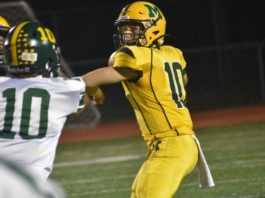