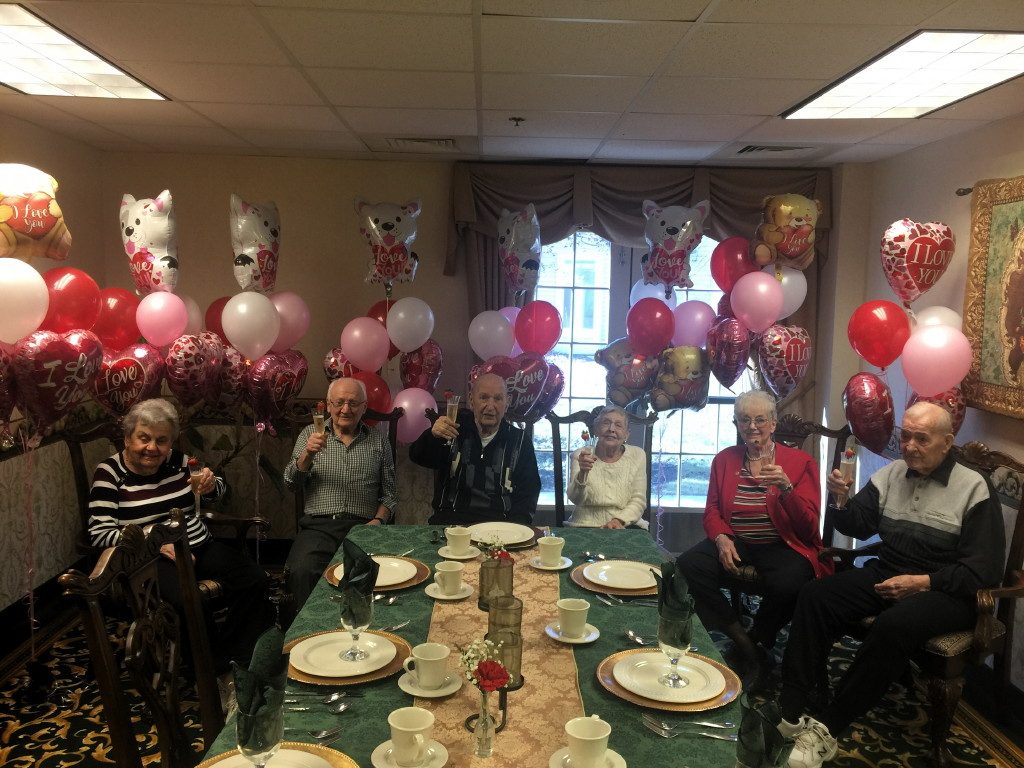 Brandywine residents Terry and Kirt Wedemeyer, left to right, Leroy and Irene Solderich, and Virginia and Frank Seery have celebrated more than 60 years of marriage.JENNIFER AMATO/STAFF
× 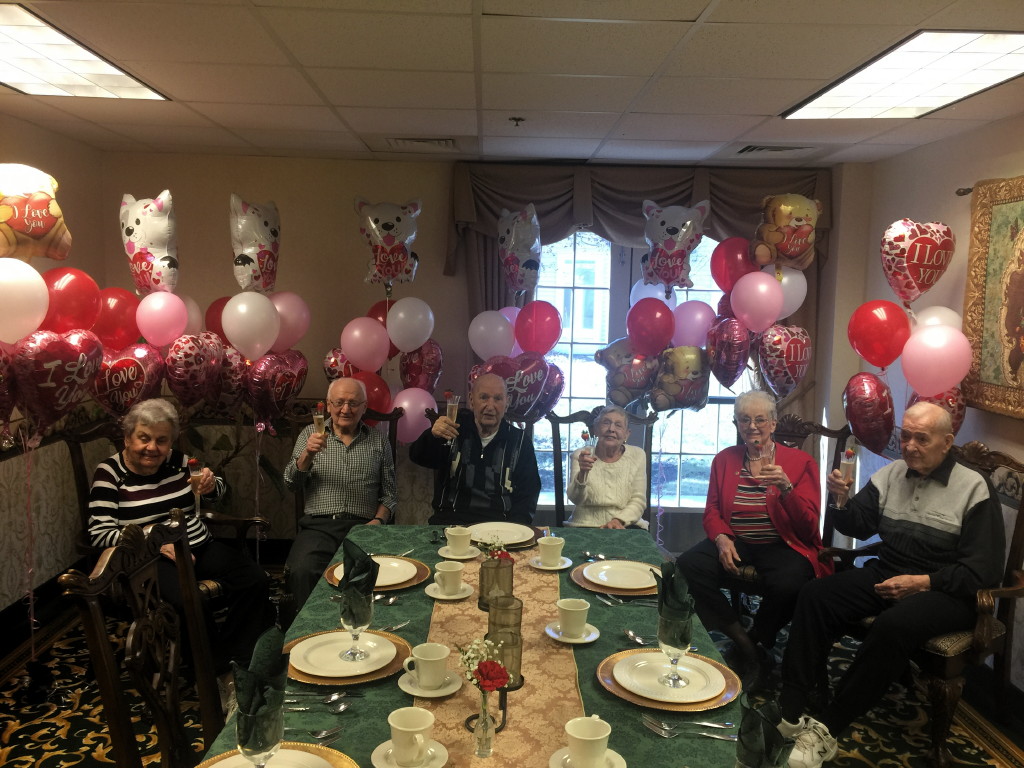 Brandywine residents Terry and Kirt Wedemeyer, left to right, Leroy and Irene Solderich, and Virginia and Frank Seery have celebrated more than 60 years of marriage.JENNIFER AMATO/STAFF

SOUTH BRUNSWICK – When asked if he and his wife Irene ever had a memorable Valentine’s Day, Leroy Solderich said, “Sure I do. Look at how many kids I have.”

Three couples who have been married for more than 60 years shared their stories of love just in time for Valentine’s Day, prior to a champagne toast for love at Brandywine Senior Living at Princeton, in South Brunswick, on Feb. 5.

Leroy and Irene, both 87, are transplants from Pennsylvania; he, from Northampton and she from Bethlehem. They have lived at Brandywine for about 10 months.

The two met when Leroy was bartending.

“We did a lot of dancing, ballroom dancing. They were getting us ready for competing,” Irene said.

Though the couple enjoyed the Waltz, the Cha Cha, the Rumba and the Tango to the sounds of a 17-piece live band, Leroy had an accident requiring knee surgery, which ended their dancing career.

Leroy and Irene got married on May 24, 1960, 58 years ago. They had four children – Sharon, Georgette, the late Mike and Leeann – as well as six grandchildren and one great-grandchild, with one more on the way.

Leroy served as a corporal in the U.S. Army during the Korean War.

They had to relocate to New Jersey because there was limited work in Pennsylvania after the war. She worked for Western Electric, and he worked as a machinist. But Irene said because they both worked, they didn’t see much of each other.

“He was coming in and I was going out, and that helped a lot. Soon after, they call it empty nest, and you look at each other and I didn’t know if I remembered him anymore,” she said.

Terry and Kirt Wedemeyer met on a blind date in 1947, suggested by one of Terry’s friends.

“I think it was on her porch,” Kirt said.

After reflecting on that date that took place 72 years ago, Terry said, “We must’ve gone out. If you didn’t take me out, I wouldn’t have gone back.”

Terry, 91, lived in Dumont and worked as a secretary for the JCPenney offices in New York. Kirt, 92, lived in Bergenfield and was an architect. He was a radioman third class petty officer for the U.S. Navy during World War II, serving aboard a ship in the Atlantic Ocean.

“I think we took it for granted. We figured we were going to get married. I remember I asked your father,” Kirt said.

“He should’ve said no,” Terry laughed.

They wed on June 6, 1948, 70 years ago. They said because Kirt is Protestant and Terry is Catholic, they were only allowed to get married in the rectory of Terry’s church and not at the altar.

They had three children, Mark, the late Richard, and Karen. They have five grandchildren and 11 great-grandsons.

Frank and Virginia Seery, both 86, grew up in Elizabeth and Newton, respectively.

Virginia knew Frank’s sister. She initially said no to being set up, but “[his sister] went to her wallet and showed me his picture and I said OK,” she said.

Frank’s sister organized the blind date, and they met at the corner where Virginia lived.

“The bar had a lot of business back then,” Irene interjected.

Virginia said on their first date, Frank said they were going to get married.

Frank served with the U.S. Navy as a chief fireman first class, but they met when he was on leave from the U.S. Coast Guard, where he served as a second class petty officer during the Korean War.

At the time, Virginia had to move to Newark because there were no jobs in Newton. Instead of living in a women’s hotel while Frank was in service, she moved in with her in laws for about six months.

Upon his return home, Frank joined the police force but also worked for Coin Depot, delivering money to banks.

Virginia worked as the business office supervisor at St. Elizabeth Hospital in Elizabeth.

They got married on Sept. 28, 1955, at Little Flower Monastery in Newton since their church wouldn’t let them marry because they weren’t residents anymore.

As for their secrets to a long, successful marriage, the couples basically agreed that communication was key, as were apologizes, and spending time as a family.

“We’d get into disagreements and then we’d make up,” Terry said.

Kirt said they would never go to bed angry.

“We stayed up all night and then the next day,” Kirt retorted.

Terry also said, “Sometimes you want to be by yourself and other times you’d rather have somebody comforting you, where they allow you to have a good cry.”

Virginia said they never had any misunderstandings “because he never talked.”

“And I still don’t talk,” Frank said, “and it still works today.”

She also said they made a commitment to stay together “in sickness and in health.”

Irene stressed that if you accept the responsibility of getting married and having children, you must take it seriously.

“You have to take care of it. Not my mother, or his mother, or another family member,” she said.

And Kirt said they treated every day as special.

“Younger people, they don’t realize how much work it is. They want to be carefree and want to party,” Virginia said.

As for celebrating Valentine’s Day, Terry said she would always cook Kirt a good meal.

“And I love to eat,” he responded.

Frank said Virginia never liked perfume, didn’t drink much and was allergic to flowers – so after his first gift, he told her not to expect anymore.

“That’s your problem,” he jokingly said to his wife.

Irene said as their children got older, they would remind Leroy of the upcoming holiday.

“Then I’d get a little candy box, four pieces of candy in it and he’d say [unromantically], ‘Happy Valentine’s Day,” she said.

“And then the kids would eat the candy, and that would be it,” Frank added.

Brandywine will hold a Valentine’s Day party for its residents on Feb. 14.