The Dinky shuttle train, which runs between the Princeton Rail Station and the Princeton Junction train station, will be back on its tracks and put into into service on May 24, according to NJ Transit officials.

The Dinky has been out of commission since October 2018 so NJ Transit could install a high-tech safety system – Positive Train Control – on its rail network. It was taken out of service temporarily because crews were needed to help meet the Dec. 31, 2018 deadline to install the new safety system.

The Dinky was expected to be placed back in service by mid-January, but service has remained suspended. NJ Transit has substituted a bus for the Dinky, between the Princeton Rail Station on Alexander Street and the Princeton Junction train station in West Windsor Township.

Meanwhile, a 25-percent discount to ride the NJ Transit bus from the Princeton Rail Station to the Princeton Junction train station took effect March 1. It will remain in place until the full restoration of train service, at which point it will be extended for an additional month to offset the full-cost fares in February.

Mayor Liz Lempert said she was thankful to all the riders who attended a Feb. 19 meeting  at the Princeton Rail Station on Alexander Street with New Jersey Department of Transportation Commissioner Diane Gutierrez-Scacetti and NJ Transit Executive Director Kevin Corbett.

The Feb. 19 meeting was the first in a series of meetings to update commuters on the restoration of rail service on the Princeton Dinky shuttle train, as well as the Atlantic City Rail Line – both of which have been out of service for months. 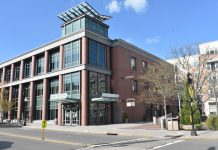