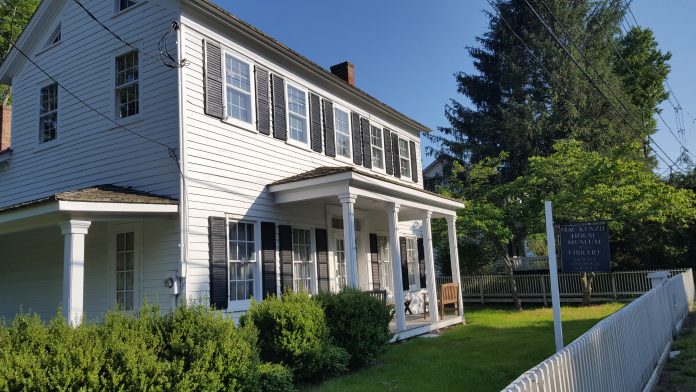 HOWELL – Members of the Howell Township Council have heard from individuals who are concerned about the future of a landmark in the municipality.

The governing body held a special meeting on March 5 regarding the MacKenzie Museum and Library, 427 Lakewood-Farmingdale Road (Route 547), Howell.

The building, a former private residence, is owned by the township and requires more than $150,000 in renovations, municipal officials have said.

Artifacts in the MacKenzie museum are owned by the Howell Historical Society which, according to statements made at the meeting, has not been active for several years.

Resident Leigh Shaffer provided the council with documents related to the property, including deeds, ordinances and certifications.

“I ask (council members) to please read these documents carefully so you can see what the original intentions were for preserving history in Howell. Although as a town we have strayed from (those intentions), they are no less important today than they were at their inception,” Shaffer said.

She asked the council to consider providing space in the municipal building for meetings of and programs organized by the Howell Historical Society, especially since meetings and programs cannot be held in the MacKenzie house at this time.

Shaffer said because there is no viable historical society at the present time, council members should consider appointing someone to organize a meeting for the Howell Historical Society.

“The first meeting should take place as soon as possible … to gather anyone in the township who would be interested in joining the historical society, getting it rejuvenated and reorganized,” she said.

Shaffer also asked council members to amend a municipal ordinance so volunteers may work on the MacKenzie property. She said the ordinance as written does not permit volunteers to work at the site because the building is not up to code.

“I would hope you approach this (issue) with an open mind and get as many facts as possible before you make a final decision. I am sure there are common sense ways we can approach moving forward, and maintain the history and the integrity of the MacKenzie house,” Shaffer said.

Shaffer will make a presentation about the MacKenzie house at the Howell Library, 318 Old Tavern Road, on March 28.

One person at the meeting asked if there has been any contact with the MacKenzie family in regard to the future of the house.

Officials said no one from the family has reached out to the council. They said the township does not have any contact information other than for two historical groups, the Howell Historical Society and the Howell Heritage Group.

Many people in attendance expressed concern the landmark building could be demolished if it was sold by the township. They said they are opposed to seeing the home demolished.

Elaine Taylor said she was speaking for the museum and the house.

“The (building) has housed a miller, the miller’s nephew and his family. It houses treasured antiques for the public to admire and learn about. It has been used as a research library for many people to study and do their genealogy.

“It has offered programs and lectures on historic subjects, it taught fourth-graders about the history of Howell, it has stood as a welcoming building as people drive into Howell from (Interstate) 195 and Farmingdale,” Taylor said.

Councilman Thomas Russo said he toured the house as a fourth-grader.

Taylor said the museum has given a lot to Howell and said it is important “we make the effort to preserve it and keep it going.”

“I feel like we have a very large budget in Howell, somewhere around $44 million, and it would just be really nice if we could find that $150,000 somewhere, that we could put into the museum,” she said.

Taylor said she would like to see the Howell Historical Society reorganize, “because we do not want to allow all the memories to be erased, because if we do, what will we become? What kind of a society will we have if you do not know where you have come from? I just think it is so important.”

Deputy Mayor Evelyn O’Donnell said the council was attempting to gather information “so we can decide at some point, do we have something here that has the kind of value we should put money into and keep it going? It is really quite that simple.”

“There have been a lot of misconceptions, mistruths and misprints, and that is unfortunate. I think today we actually are progressing. I think people have in their possession printed information that has been emailed or mailed out that proves certain things and that may influence how people on the council feel,” O’Donnell said.

No formal action was taken by the council during the March 5 meeting.

The building has its origins as a settler’s cabin between 1730 and 1750. A grist mill was built in 1779 and the cabin became the miller’s home. An addition to the home was built in the 19th century. Jessie and James MacKenzie purchased the house in 1956 and owned it until 1982, when Howell paid for a restoration.

Council members have said the money needed for the renovations must be generated through fundraising.