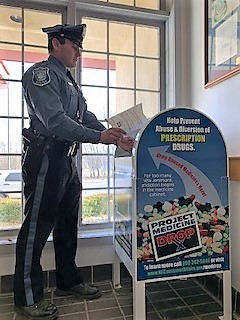 HOWELL – A representative of the Howell Municipal Alliance has said Howell is the first municipality in New Jersey to permit police officers to visit a resident’s home to pick up unwanted medications with the goal of halting an ongoing opioid epidemic.

“We have a focus on youth, but we work for our entire community, so we address seniors, we address all populations,” said Christa Riddle, the alliance’s coordinator for substance abuse prevention.

The alliance also works with schools.

“We are trying to bring prevention education and awareness to the community because some people are still surprised to hear there are overdoses in Howell. They think it is not a local issue … but it is everywhere,” Riddle said.

At the headquarters of the Howell Police Department, 300 Old Tavern Road, there is a secure box where individuals may drop off unwanted, unneeded and expired prescription medications with no questions asked.

“People sometimes get hooked on opioids because they go through the medicine cabinets of family members, grandparents, friends, even open houses apparently,” Howell Police Capt. John Storrow said. “The whole idea of the medicine drop box we have at police headquarters is that if you do not want that medication in your home, you can drive to the police department (and drop it off).

“It is good (the drugs) are out of your house because then your children’s friends cannot go into the bathroom and take those pills and down the line get hooked; because (drugs are) available to them and kids are curious, kids get pressured, or whatever the case may be, and (the drugs are) there. We want to try and eliminate the availability of the drugs,” he said.

Storrow said police tried to come up with an alternative and decided that “maybe we can go to them.”

“Police officers are in every sector of the township. Residents can call our non-emergency number (732-938-4111) and when an officer is available … we will send an officer to them,” he said. “This also provides a community service where people get to meet our officers and talk to them.”

The Howell Municipal Alliance has been providing prescription disposal bags for anonymous and proper disposal of prescriptions and over-the-counter medications.

An individual may place their unwanted prescription medication or over-the-counter medication in the bag and seal it. Pills, patches, inhalers and other solid medications should remain in their identifying packaging and bottles. Names and labels may be removed or blacked out. No syringes or needles are accepted.

“We go to all the pharmacies every two months and we replenish the bags. We encourage (the pharmacies) to put them out when they are dispensing opioids or prescriptions. We put the bags at town hall, the library, the courthouse, the senior center. I constantly go over to the senior center because that is a population with medication,” Riddle said.

The alliance has stated that misused prescription drugs can lead to opiate, heroin and other drug addictions for individuals of all ages.

Statistics indicate that every day in the United States, 2,500 youths take a prescription pain reliever to intentionally get high for the first time, and that 6.2 million Americans misused controlled prescriptions, according to a 2016 national survey on drug use and health; the majority of abused prescription drugs were obtained from family members, friends and home medicine cabinets.

“The alliance has a meeting on April 1, but we are just trying to get an open and informal dialogue about the problem. What do people see as the problem? What do they think we should do? We want their feedback and we are looking to get parents more involved,” Riddle said.