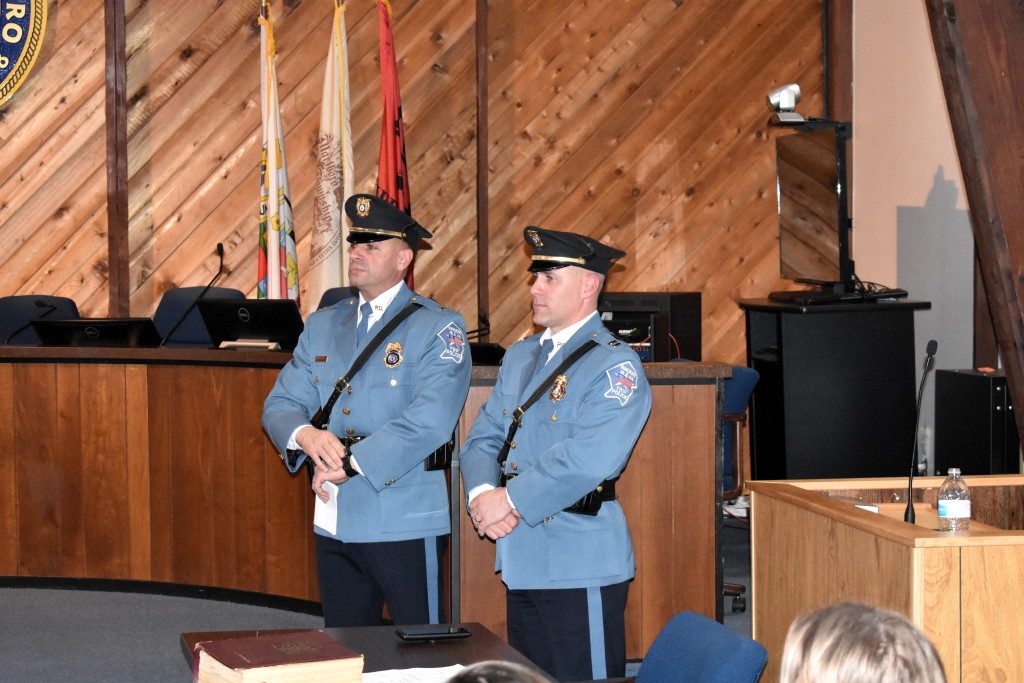 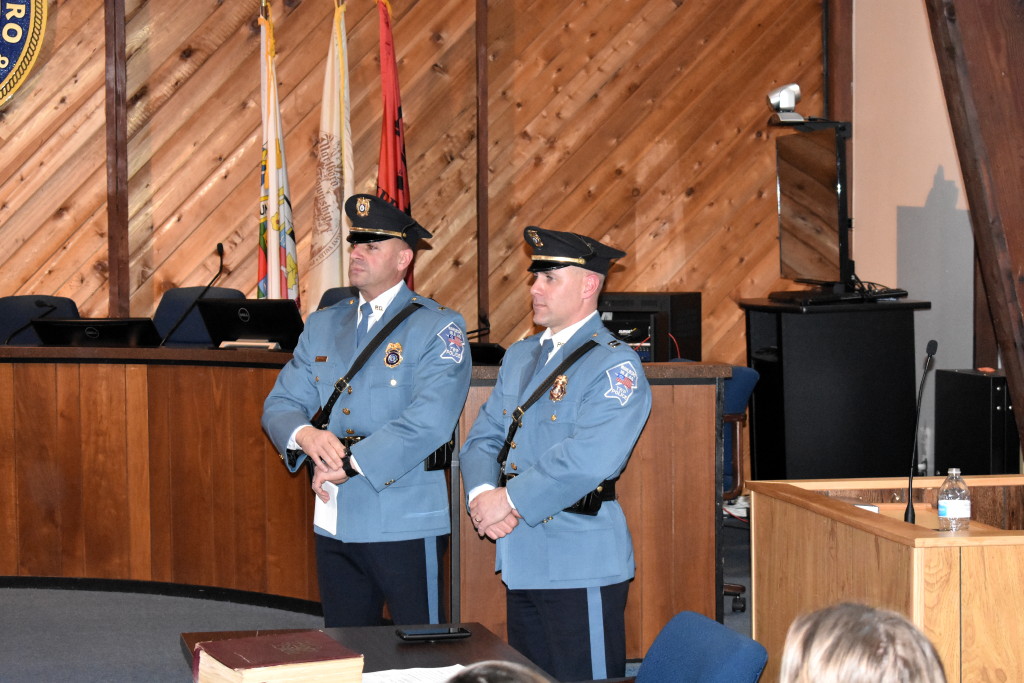 MARLBORO – Peter Pezzullo and Bryan O’Hare were sworn in to new positions in the Marlboro Police Department during a ceremony at Town Hall on March 8.

Residents and elected officials filled Town Hall in a show of support for the two veteran officers. Mayor Jonathan Hornik swore in both men to their new positions.

Pezzullo, who is a Marlboro High School graduate, was promoted to deputy chief with the expectation of being named police chief in September when Police Chief Bruce Hall reaches the mandatory retirement age of 65.

Pezzullo has served in the police department for 22 years. He served in the U.S. Marine Corps for 11 years and achieved the rank of sergeant.

Pezzullo earned a Bachelor of Arts degree from Rutgers University and a Master’s degree in criminal justice from Boston University. He is a certified public manager.

Hall was unable to attend the ceremony, but he congratulated Pezzullo in a message that was read by Hornik.

“Deputy Chief Pezzullo’s education and experience will serve the township and the police division well as we move through the process of transitioning to a new administration staff of the department.

“Over the course of the next few months, Deputy Chief Pezzullo will assume greater responsibility for the day-to-day options of the police division. We will work in concert to ensure a seamless transition occurs and that the police division continues to provide exceptional service to our community,” Hall wrote.

After being sworn in as deputy chief, Pezzullo addressed the audience.

“I am excited to assume this new position,” he said. “I know I’ll be mentored by Chief Hall over the next five months and I know he will be a wealth of knowledge. I am motivated to be a crucial part of this department’s future.

“I am lucky be surrounded by a competent committee and a motivating command staff. With individuals like Capt. (Fred) Reck and Capt. O’Hare, they will be playing key roles to reshape our department’s future. Our goal will remain consistent. Our police department will continue to strive to improve our services to the community.

“We will do this by educating our officers, providing top-of-the-line training and equipment, and strengthening our bond with residents. I look forward to working closer with the mayor and Township Council. I am honored to serve this community and the Marlboro Police Department. I will always be humbled by your continued support,” Pezzullo said.

O’Hare has served as a Marlboro police officer since 2002. He has been a patrol officer, a patrol sergeant, a platoon lieutenant and an administrative lieutenant.

He earned a Bachelor’s degree in criminal justice from Sacred Heart University and will complete a Master’s degree in administrative science from Fairleigh Dickinson University this spring.

O’Hare is a certified public manager and he has certifications in SCUBA search and recovery, the FBI Law Enforcement Executive Development Association and numerous supervisor training certificates, according to the mayor.