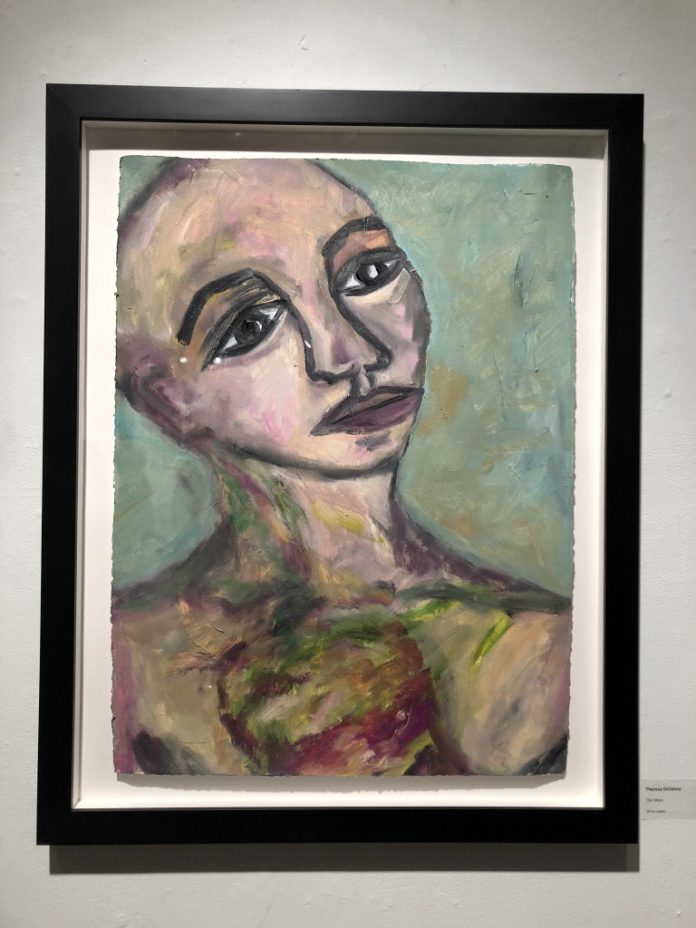 Eight artists have shown that creating art can be therapeutic and help the human body recover physically and emotionally after a cancer diagnosis.

The exhibition “Art & Healing: Expressions of Trauma and Gratitude” is being showcased at the Monmouth Museum on the campus of Brookdale Community College.

The exhibition features the work of eight artists who have crafted visual interpretations of how cancer influenced creation and how their diagnosis served as a catalyst for themselves as creators.

“When I was recovering from ovarian cancer, I had not painted in 30 years. I worked with collage and mixed media, but I went through a depression and couldn’t get myself to put pieces of paper together. I eventually just started moving my hand and painting. Painting is very body-centric to me. I didn’t think about what I was painting. I just painted and these images came out,” she said.

Starrett said her favorite colors are purple, green and blue. However, she found herself painting with red, yellow and brown. She said the warm colors align with colors of the chakras – energy centers – in the human body where her cancer was.

Starrett called the coincidence “spiritual.” She noted that as she healed and her cancer began to shrink, her paintings also became smaller in scale.

June Wilson said she began working on her collection of large oil paintings on wood before her cancer diagnosis. She described the artistic process that ensued as ongoing. Wilson said creating an abstract interpretation of nature on wood was therapeutic and reminded her of her childhood.

“The (works) are symbolic of nature. The works are poetic, like a metaphor. My father used to raise bees. I was always interested in bees. I wanted to use a bee thorax to comment on nature in my work … My father used to always say honey was a cure. These works act as a connection to my childhood,” she said.

Carol Radsprecher, who recovered from early stage breast cancer 20 years ago, is a painter who is nurturing a newly established fascination with the photo editing software Photoshop. Her graphic works accentuate what Radsprecher called “the angst I still feel” about her experience with cancer.

“Obviously, there was no Photoshop 20 years ago, so these were done recently,” Radsprecher said. “But I’ve never gotten over the fear of cancer or what I went through … Sometimes I start by taking parts of older images and copy and paste one part of (an image). I’m also a child of a Holocaust survivor, so that filters in to (the works).”

Theresa DeSalvio created a series of self-portraits that document her journey with Hodgkin’s lymphoma. Her first oil painting depicts a solemn woman with a shaved head. A large rainbow mass is painted in the center of the figure’s chest.

DeSalvio revealed that her paintings were created in sequential order. Her paintings depict DeSalvio undergoing radiation treatment, shaving her head and lying awake at night.

“I did these on my good weeks because I had chemotherapy for six months … (Painting) let me take off from being ill. I’m an artist, so this is what I do day to day,” she said.

Nisha Sondhe, a photographer, contributed her comic-book like work to the exhibition. Her images, which were captured with a camera and edited to appear grainy and cartoon-like, offer a visual portrayal of what she called “chemobrain.”

Sondhe said that as she underwent chemotherapy, her vision became impaired. When she looked at other people, Sondhe said, they began to look like comic book characters.

“The thing they never tell you about chemotherapy is this ‘chemo brain.’ It’s a state of being completely high. The chemotherapy drugs are not unlike heroin, for example. Those drugs are in the chemotherapy. (The drugs) make you intensely high. I felt like people were actually turning into comic book characters. These are photographs of how I saw stuff,” she said.

Arelene Mollow said she developed breast cancer when she was 49. Her work features plaster casting of different body parts and a memoir to the lessons Mollow said that her mother taught her as a child.

“I grew up in the 1950s. Girls had to look a certain way. My mother said it takes pain to be beautiful … That was the mantra in my family. (This idea) went along with (the exhibition).

“I was one of the few people who was never afraid to die,” Mollow said. “Soon after (my cancer was gone), I was up in Vermont with friends. We started playing with plaster. I did plaster casts of their hands. I then decided to do a plaster cast of my breast that had the lumpectomy. Then I wrote a story about it.”

Bob Rivera created an avant-garde art installation that, at first glance, is not visually telling on his own cancer diagnosis. Rivera combined a variety of materials to create three dimensional collages, a work he said was influenced by his own survival.

“I use pallets as a staring point. It’s almost like a metaphor … I hope I can combine materials into an entity that is interesting and impressive,” Rivera said.

Shari Epstein created visual interpretations of dormant landscapes that routinely display the absence of earthly colors such as blues and greens. Epstein said “This is how I felt, I felt like I was dormant going through radiation.”

Epstein said she realized an aspect of her own artwork the first time she displayed the oil painting on a wall. In one painting, the barren landscape features silos. In another painting, a nuclear reactor takes the place of the silos.

Starrett, who curated the exhibition, said, “All of the artists in this exhibition were engaged in making art long before being diagnosed with cancer. For each, the diagnosis was a life-changing experience as individuals and as unique as their artwork.

“In ‘Art & Healing: Expressions of Trauma and Gratitude,’ the artists have come together as a relevant voice expressing visual stories of trauma, healing, hope and gratitude, and the significance that making art has, and continues to have, on their lives,” she said.