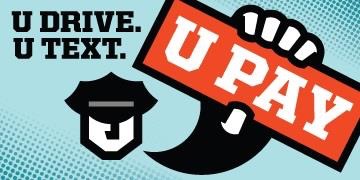 The campaign, which will run until April 21, is aimed for law enforcement agencies throughout New Jersey to use a combination of traditional and innovative strategies to crack down on motorists who text and drive.

According to local officials, distracted driving is a dangerous epidemic on New Jersey’s roadways, being cited as a major contributing factor in over 804,000 motor vehicle crashes in the state from 2011-15. Officials said that 3,450 people were killed in distracted driving crashes in 2016 alone, nationwide.

To combat these troubling statistics, this effort was initiated as part of a nationally recognized high-visibility enforcement (HVE) campaign that combines periods of intense anti-texting enforcement coupled with advertising and media outreach to let people know about the enforcement and convince them to obey the law.

In a statement released by the BTPD on March 27, the department announced its participation in this initiative as well as its importance to local motorists.

“The BTPD will be increasing our enforcement efforts on distracted drivers during the month of April as part of New Jersey’s ‘UDrive. UText. UPay.’ enforcement campaign,” the statement read. “Beginning April 1 through April 21, the high visibility law enforcement initiative will target motorists who engage in dangerous distracted driving behaviors such as talking on hand-held cell phones and sending text messages while driving… Remember, driving requires your full attention, avoid distractions and get to your destination safely.”

On March 28, the FTPD released a statement as well to announce its stance on this issue as well as their commitment to the effort.

“The FTPD will be participating in the 2019 Distracted Driver Campaign. The campaign is sponsored by the New Jersey Division of Highway Traffic Safety,” the statement said. “Historically, the most effective tool used to change driver behavior are targeted law enforcement campaigns, like Drive Sober or Get Pulled Over and Click It or Ticket. Since their inception, these two initiatives have resulted in significant reductions in impaired driving and gains in seat belt usage, respectively.”

Officials noted that distracted driving is any activity that could divert a person’s attention away from the primary task of driving. All distractions endanger driver, passenger and bystander safety.

These types of distractions include: texting; using a cell phone or smartphone; eating and drinking; talking to passengers; grooming; reading, including maps; using a navigation system; watching a video; adjusting a radio, CD player or MP3 player; text messaging.

According to state law, the penalties for texting and driving for the first offense include a fine of $200-$400. The second offense fine increases to $400-$600. The third (or subsequent) offense includes a fine of $600-$800, three motor vehicle points on your license and a possible 90-day license suspension. These fines do not include any court costs that may be incurred.

Not only have municipal officials teamed up in the initiative, but Burlington county officials have joined in as well.

In a statement released from the county sheriff’s office on March 28, officials expressed their role in wanting to participate in this campaign as well as its significance to the communities throughout the county region.

“The County Sheriff’s Department is proud to join forces with local law enforcement agencies in the community to once again support this crucial initiative,” said sheriff’s officer chief Michael Ditzel. “Each year it becomes increasingly important to crack down on distracted driving. Our department is committed to keeping Burlington County’s roads safe for everyone from drivers, pedestrians and its residents.”