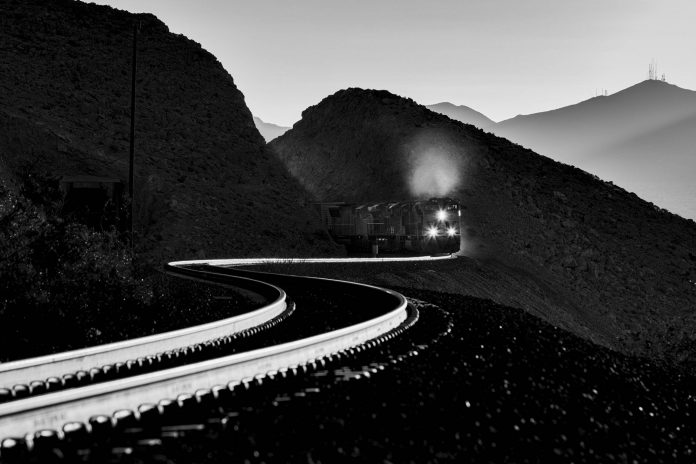 A photographer’s child-like enchantment with trains has motivated a visual treasure.

The Monmouth Museum is showcasing the work of Eric Williams, whose photographs have been chosen to represent the New Jersey Emerging Artist Series for the month of April.

Williams’ exhibition, “Light, Landscape and Longing,” is on display at the Monmouth Museum on the campus of Brookdale Community College, Lincroft, through April 21.

The artists who are chosen to participate in the series represent the diversity of talent which is seen throughout the state, according to the museum.

Williams’ photographs feature color and black and white images of railways, trains and landscapes which capture what the artist described as an aesthetic moved by nostalgia.

In an interview, Williams said he developed a passion for train photography as a child, before leaving photography for more than two decades.

Williams, who is a resident of Millburn, Essex County, said he returned to his pursuit of the art form after a 25-year hiatus.

In the interim, Williams said, he focused on his profession as a creative director at RPG – a retail display and environment design firm.

“I explored photography twice in my life,” Williams said. “The first time I was young. I became interested in railroads as a kid and read (train-oriented) magazines. I wanted to emulate the photos in magazines. I purchased a camera when I was 15 and started taking railroad pictures.

“I then began taking photography classes in high school … I wanted to attend a private photography college in California, but my parents said (photography) would not be a good career choice. I ended up finding design, which is my current profession,” said Williams, who grew up in the Seattle area.

After graduating in 1984 from the University of Washington in Seattle, Williams married, had children, moved across the country and became career oriented.

More than two decades later, Williams began to take photographs again. He said his father influenced his fascination with railroads.

Williams, whose father served in the U.S. Air Force, said he frequently traveled as a child.

“I remember being in the car and moving from one location to another,” Williams said. “My dad would always point out the trains. Sometimes we would stop at a level crossing and either count the train cars or (my father) would call out the different road names … I still remember these times … This passion then just sort of evolved.”

Williams, who occasionally converts his color photographs to black and white images, agreed that the neutral-toned renderings are “the most expressive of my vision.”

“Most of the photography I saw in the magazines as a kid was black and white,” he said. “There also are other artists who shoot in black and white that influence me. In high school, I learned black and white processing. That was pretty easy, unlike color.”

Williams said light is portrayed in the form, structure and contrast of a captured image. He said he photographs color images and edits the photographs to become black and white in the editing software Silver Efex Pro 2 in Adobe Photoshop Lightroom.

“That is the way my vision is. That’s how I see things,” Williams said. “I look for interesting light that creates a lot of dramatic shadows and contrasts. I look for light to emphasize the structure and form of a composition. Generally, black and white works better for this.”

Williams said he appreciates when color photographs capture sunsets or “cool atmospheric conditions,” in which case the images will remain in color.

“Color conveys a different mood than black and white,” he said. “For railroads, which are associated with nostalgia and memories of older times, perhaps better times for some people, black and white is more classic.”

Williams said he has recently taken an interest in capturing portraits of individuals who appreciate trains – which could include train conductors and children.

Although art is subjective and open to interpretation by the individual, Williams said he wants viewers to appreciate the nostalgic aesthetic his photographs present.

“I have a fine art approach to my railroad photography and beauty is definitely a part of that,” he said. “I hope the images of the railroad make a connection with people.

“The railroad is part of the art world. The train represents a sense of moving on or reminiscing on the past. It’s a transition,” Williams said.