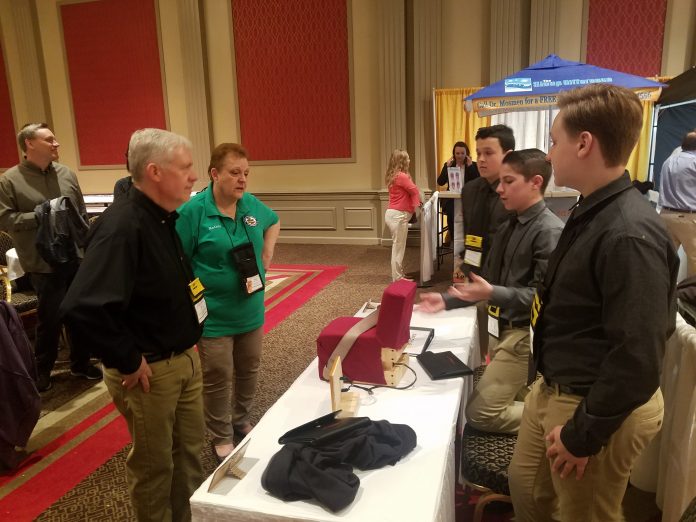 HOWELL – Three students from Howell Middle School South recently had the opportunity to present an idea they developed regarding school bus safety to more than 200 industry leaders.

Connor, Dante and Dan presented a proof of concept for what they call SafeBus+. Their idea is designed to keep children safe while they are on a school bus, according to information provided by the Howell K-8 School District.

The students proposed pressure sensors which would alert the bus driver through a display and feedback loop when students are seated and properly belted. In a practical application, the driver would be aware a child was still in his seat even if the youngster could not be seen (i.e., if the child falls asleep and does not exit the bus at his stop).

The students’ effort began a year ago when their team submitted an idea to STEAM Tank, a “Shark Tank”-like program sponsored by the U.S. Army and the New Jersey School Boards Association.

STEAM refers to curriculum in the fields of science, technology, engineering, arts and mathematics.

According to the school district, the students’ idea was selected from more than 100 entries to proceed to a regional final. From there they were tapped to participate in the state finals. The students sold their idea to the “Shark” judges and won the New Jersey Middle School Best in State STEAM Tank title.

Teacher Josh Langenberger explained how his students earned the opportunity to present their concept to professionals.

“They won the STEAM Tank challenge, but prior to that during the semifinals they had networked with people who were associated with building school buses,” he said.

That led to the students’ appearance at the annual conference of the School Transportation Supervisors of New Jersey. They were the keynote speakers and had an opportunity to network with potential clients and partners.

“It was like an accolade for all the work they had done … to speak in front of these industry experts, administrators and vendors, to share their idea. It was quite an honor for them.

“I certainly knew they were capable of achieving this level, but I was just amazed. I don’t want to overuse the word amazed, but I was amazed; at their presentation, at the opportunities they had to present,” Langenberger said.

“I was standing there watching them on this enormous stage, with a huge screen, and when they looked out into the audience they saw over 200 adults whose profession is school bus transportation and they were presenting (their idea) to these adults.

“I knew there were many people in that room who would have loved the opportunity to come up and make a presentation … and we had 12- and 13-year-old kids from Howell being offered this honor,” Langenberger said.

“We were invited into the vendor area, where the students set up a table, and all these vendors came over. People whose livelihood is dependent on this field … were coming over and asking our students about their idea and offering feedback and additional resources and it was amazing,” he said.

Langenberger said the students had a real-life experience in the business world and learned what expectations are in that world.

“It is not that the students are not capable of all this, because they are, but I never could have imagined networking to a point where they had these kind of experiences. These are true-to-life experiences I would like to offer to all of my students all the time and I am ecstatic these students had that opportunity,” Lagenberger said.

He said he told the students some adults wait their entire life to have the opportunity they just had in middle school.