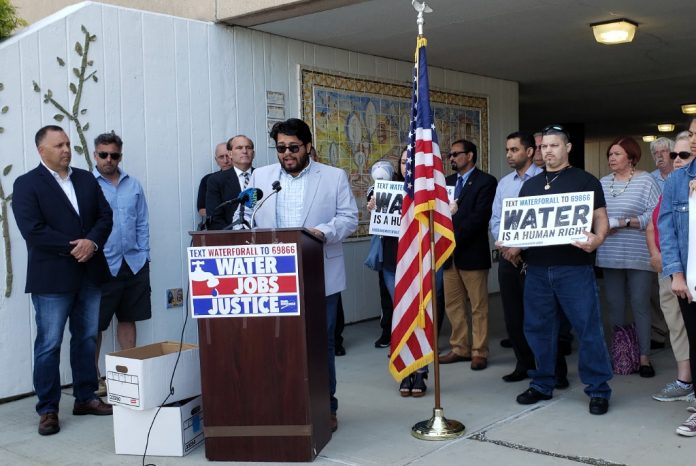 EDISON – The public may have a say on the proposed $811.3 million, 40-year, proposed public-private partnership with Suez North America.

On June 3, Township Clerk Cheryl Russomanno received boxes upon boxes of some 4,958 signatures in support of a petition that could trigger a public vote on whether the township should have permanent, public ownership, operation and management of its essential water and sewer systems.

As a result, township officials postponed the third public hearing on the proposed water and wastewater concession agreement with Suez, which was supposed to be held on June 6.

A message was sent out through Nixle, which stated, “In light of a recent petition filed with the town clerk, the council believes it is necessary for the clerk to review the petition and present it to council, if appropriate, before further hearings continue.”

The clerk has 20 days from June 3 to verify the legitimacy of the signatures and their voter registration status, according to Peter Hart, senior communications officer for Food and Water Watch, which helped residents move forward with a petition.

“Directly after that, the Township Council will have first and second readings on the ordinance,” he said. “They will vote to adopt or reject the ordinance on second reading. If they reject, the issue will go to a special election, which we project could be sometime around September.”

Hart said they “submitted 4,958 signatures, and are confident our petition will meet the requirements for signatures collected,” adding the required amount of signatures should be about 3,330.

Residents Keith Hahn, Anthony DeAmorin, Elizabeth Hahn, Maria Wise and Tom Kenny led a grassroots effort on social media as well as events in the township. Keith Hahn said the process for a petition started a few months ago with the initial goal of 4,000 signatures.

The residents held a press conference outside of Town Hall before they submitted the signatures.

With almost 5,000 signatures collected, Keith Hahn said he hopes the elected officials see “how engaged the public is, how much this means to our community and how much the people want to have a say on what they do with the water and sewer utilities.

“When we first found out about [the Suez proposal], there was not a lot of information, [township officials] were not forthcoming … we really had no idea what to do,” he said.

Keith Hahn explained that a friend introduced him to Junior Romero, central New Jersey organizer for Food and Water Watch, a non-profit organization that champions for healthy food and water for all and the attorneys they work with.

“These people have been invaluable to us with the resources … the legal expertise and help they provided,” he said.

In the effort, Keith Hahn reported that DeAmorin probably put 2,000 miles on his car and made himself available around the clock.

“I have to admit, it was an honor to do this, it really was, and this is a victory for all of Edison,” DeAmorin said. “I’m proud to be a part of it, it was worth every ounce of time and energy. It wasn’t easy, but we got it done, we had a goal, had a plan and we executed it. This is what it looks like when all parties come together, Republican, Democrats Independents, for the better good of the future of community.”

Romero said the grassroots efforts reiterate that the public can take a proactive initiative under the Faulkner Act, can petition their government, and can bring the Suez proposal to a ballot.

“This initiative gives Edison a chance to operate its water system in the public interest,” Romero said. “Privatization has proven to be costly to ratepayers across the state and the country. If the council does not pass the proposed ordinance now being submitted by this groundswell of petitioners, the public will get the chance to decide whether or not to restore public control and oversight over these essential resources.”

Mayor Thomas Lankey explained that in his role as mayor he “appreciates and encourages our residents to participate in Town Hall’s decision-making process” adding “many people have already offered useful advice and suggestions at several public hearings on the proposed public-private partnership with Suez North America.”

“If a referendum occurs, people should remember this partnership is the most beneficial, cost-efficient way for Edison to retain ownership of its town-wide sewer system and South Edison’s water system,” he said. “It would enable Edison to payoff existing utility debt, strengthen township finances, ensure gradual, reasonable rate increases, and maintain a rate-freeze for our senior citizens.”

Lankey reported that the partnership “also means Suez – a firm with the expertise, manpower and necessary equipment – would make $480 million worth of improvements to Edison’s sewer and water systems, and bring them into compliance with today’s industry standards.”

In the first of several public hearings, Mayor Lankey, along with Joseph P. Baumann Jr. and Fran McManimon, attorneys from McManimon, Scotland and Baumann LLC, Roseland, Dennis Enright, founding member and principal of NW Financial Group, Hoboken, Peter Kocsik, senior vice president of Mott MacDonald Group, Iselin, and Kevin Chandler, of Suez, presented the public with information about the partnership and why they believe they have negotiated a “robust” plan best for the township. The hearing was held at Middlesex County College on March 28.

A second meeting was held on May 2 where officials presented cost benefit analyses and received more public input.

Lankey said the proposed long-term 40-year lease agreement with Suez North America will not only allow Edison to retain ownership of the water and sewer systems, but also provide significant financial benefits for the community.

The proposed agreement provides the necessary $496.5 million investments for infrastructure improvements; provides the township with a sizable “upfront payment” of $105 million, which the township will use to retire its existing debt and utilize a small portion for the design, development and construction of the long discussed new municipal community center; rate protection; and keeping the senior freeze intact.

Lankey said rate increases will be capped as they relate to an agreed upon formula expected at an average of 4 to 5 percent, which is below national average increases.

Baumann said the plan would provide rate stabilization with the goal of avoiding drastic rate increases. He said for seven years the rate increases would be capped at 4.9 percent for residential customers.

For the average ratepayer, a 4.9 percent increase would amount to $3.30 a month for water and $1.90 for sewer wastewater.

The proposed contract requires Suez to manage and operate the township’s water distribution system and sewer collection system including operations and management in accordance with a best management practices operations and technical standards manual; maintenance and operations annually of $4 million increasing with inflation over the 40 years of the contract; and billing and collection to customers of the township systems, both commercial and residential.

Township officials said the partnership is separate from water treatment, which will remain with New Jersey American Water.

The partnership agreement is contingent upon a local public hearing and will require approvals from the Edison Township Council, the state Department of Community Affairs, the Department of Environmental Protection and the Board of Public Utilities.