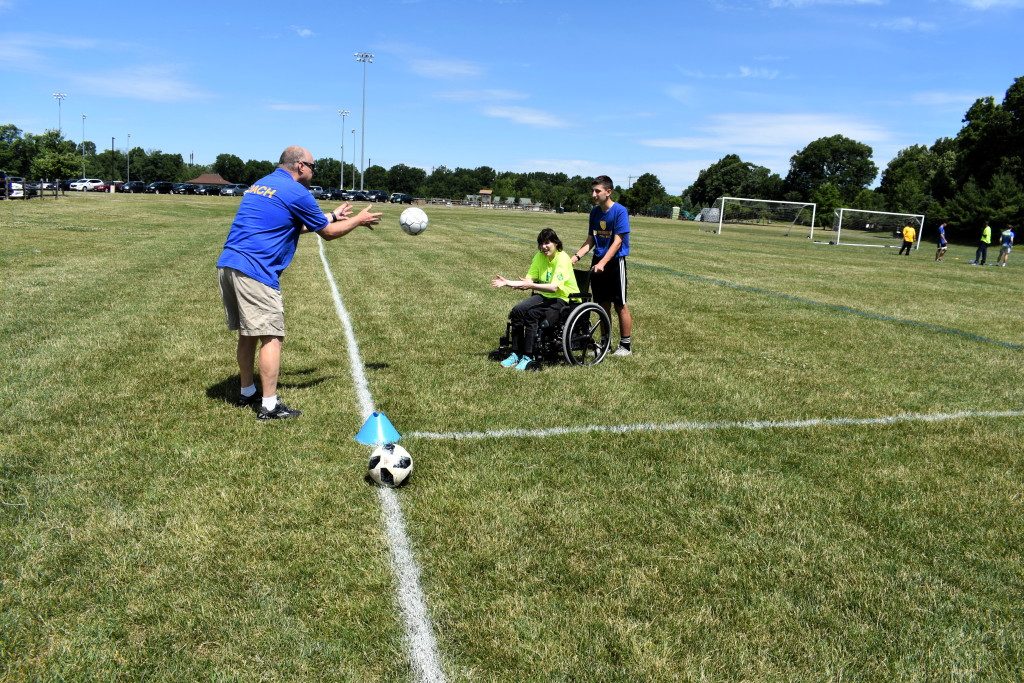 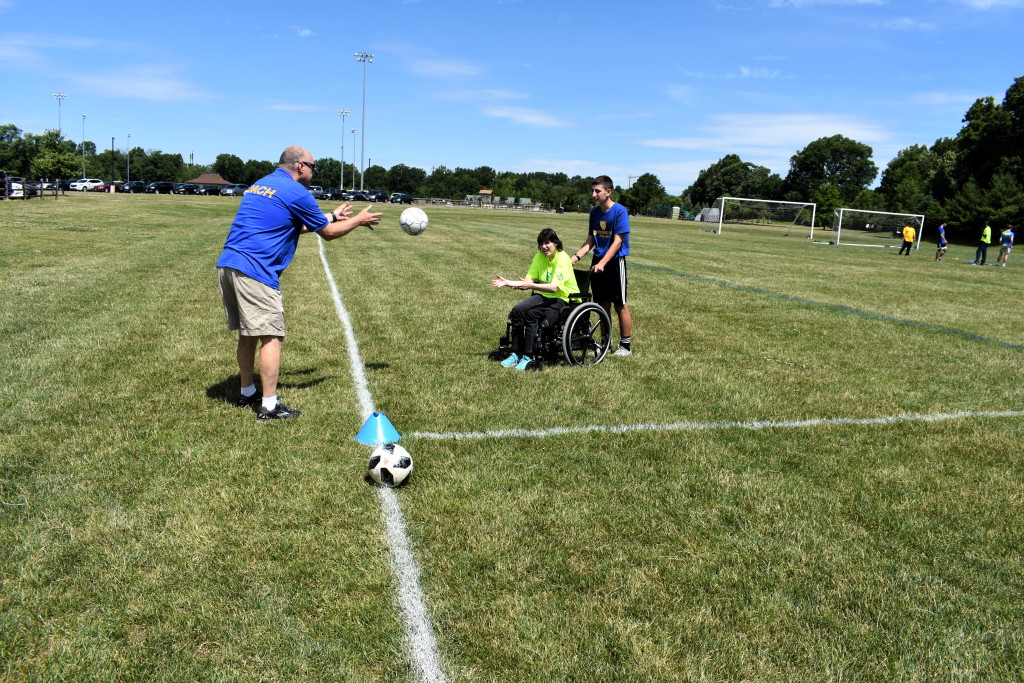 At age 30, she continues to spend a series of Saturdays in the spring on the field at North Brunswick Community Park.

Diagnosed with Dandy-Walker malformation syndrome, Ferraro’s brain never fully developed, according to her mother Sharon. In 2002 she was diagnosed with neuromuscular scoliosis, wore a back brace, and then had surgery that May. Though once a walker and a runner, because of her fear of walking, she is now confined to a wheelchair.

Sharon Ferraro said Alyssa Ferraro also has autistic behaviors, a speech delay and is considered to have cerebral palsy.

The South Brunswick resident read a newspaper article years ago about Buddy Ball, and asked her friend to check it out.

“[Alyssa] loved it and I loved it because she had a buddy to help her out,” Sharon Ferraro said. “She plays with kids and doesn’t have to play with mommy. … Every morning she wakes up kicking her feet…. She has a ball. No behaviors, no nothing. She’s just having a good time. That’s what we like: having fun.”

And much fun was to be had on June 8, as North Brunswick Buddy Ball Soccer, a division of the North Brunswick Soccer Club, held its Festival with Friends, joined by members from the East Brunswick and Highland Park clubs.

“It’s a wonderful thing for the community,” said Tom Abode, president of the North Brunswick Soccer Club. “I can’t emphasize enough the community outreach, and I’m thrilled to be part of it.”

“We are so happy you’re in North Brunswick. We welcome you here. We hope you have a great time,” Mayor Francis “Mac” Womack said at the beginning of the event.

Sarah Farghaly, 18, of North Brunswick, began volunteering as a buddy in April when she learned of the program at school. Her sister, who has Down syndrome, participates in warm ups, drills and scrimmages with the program.

James Harmon, the top soccer coordinator for the East Brunswick Soccer Club, said he and Ron Brandsdorfer began a branch of TOPSoccer (The Outreach Program for Soccer) in 2011 through New Jersey Youth Soccer. The rationale was that in order to be one of the top programs in New Jersey, their soccer club needed to have a special needs component.

“We couldn’t be the top if we didn’t offer soccer to all our members of the community,” Harmon said.

“This gives the kids an outlet to participate in an activity. … They are out here with other kids in the fresh air on a beautiful day. It’s really good for socialization,” he said.

He said it is also an opportunity for parents to socialize with other adults.

“Parents have the opportunity to network with others … and have their kids outside, happy, running around with friends of theirs,” he said.

He said his club appreciated the effort put forth by North Brunswick, such as having a police car and firetruck for the children to see, as well as an ice cream truck on site.

“They’ve gone through such efforts to do a wonderful thing. They should be commended. We are happy to do more with them in the future,” Harmon said.

Highland Park Buddy Ball began about 11 years ago when Micky Landis’s oldest son wanted to be a “pal” as part of his Bar Mitzvah project. Since the clubs in the area did not have any buddy positions open at the time, Landis decided to establish a club of his own.

“It’s been successful in terms of the number of participants, and we believe the impact on the community,” he said. “It’s been good for the families of children with disabilities but also good for the high schoolers … who give up their Saturday mornings when their friends are still sleeping and they’re coaching from 9:30-11 a.m.”

About 25 players are enrolled in the program, while about 40-50 coaches are available at any given time.

Landis said an added bonus is that all the children learn about cooperation, tolerance and respect. For example, since Highland Park is such a small town and he said people tend to cross paths often, the teens will say hello to the players when they are out and about, they will sit with them at lunch if they are alone, and they stop any potential bullying.

The Festival with Friends event was supported by the Township of North Brunswick, the mayor’s office, the council, the police department, the fire department and the parks department.

The children received a t-shirt, a medal and a patch for their participation. They and their families were then granted free, exclusive admission to the North Brunswick Youth Sports Festival before the gates opened to the public.

Three bins of food were collected for the North Brunswick Food Bank.

JCP&L outage causes 17,000 in Monroe and Jamesburg to lose power