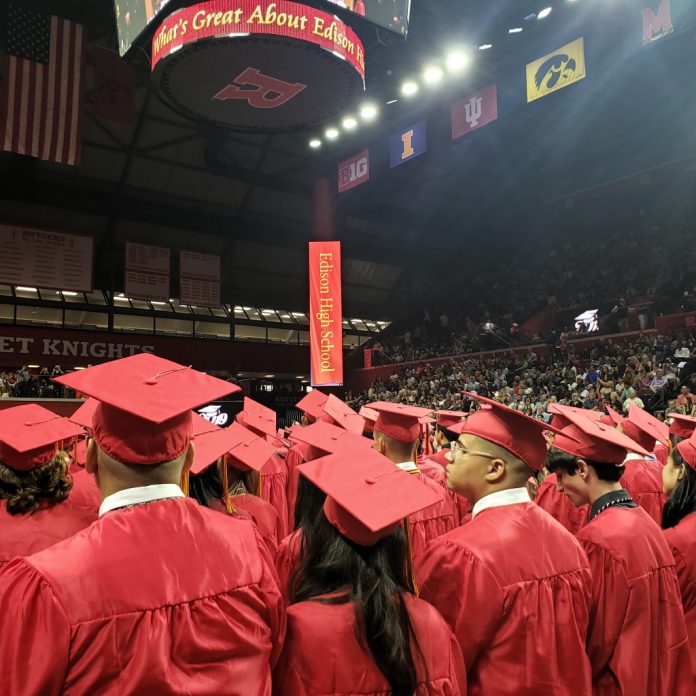 That is how Sameer began his valedictorian address during the 60th Edison High School commencement ceremony held at the Rutgers Athletic Center in Piscataway on June 21.

The high school senior was a passenger in a car with his family on a trip in Canada. It was pouring rain when the car starting spinning out of control.

Two thoughts entered his mind as the car was spinning: “relief” and “I haven’t even lived yet.”

The second thought was even though he had lived 18 years, he really had “not lived a single day.”

Sameer said when he was growing up, he wanted to be the best at everything, from student athlete to artist; however, over the years, he realized he was not the best artist or best athlete, but the best student with the goal of valedictorian.

“It was not a dream, it was a goal. … I’m standing here before you today, I got it,” he said, adding despite the honor, it was not satisfying due to the cost of time with family, friends and enjoyment.

He implored his fellow peers to not lose themselves in a goal.

“Have fun while you are still alive enjoying [your] time as much as possible,” he said, adding “life will come and go, it is up to you to not be left in a spinning car thinking, ‘I haven’t even lived yet.'”

Principal Charles Ross welcomed family and friends of the 476 students of the Edison High School Class of 2019.

“As we part, it is bittersweet,” he said. “Remember as a class how much love you have as a class. … Stay on track and be your best.”

The Edison High School band, led by Marc DeNicuolo, played as the students made their way to their seats. Morning announcer Zenaya Brito led the crowd in the Pledge of Allegiance and the Edison High School Chamber Singers, led by Kenneth Brown, sang the National Anthem.

Schools Superintendent Paul Saxton and Board of Education members handed out diplomas to the students, who moved their tassels from right to left and threw their graduation caps up in the air as family and friends cheered.