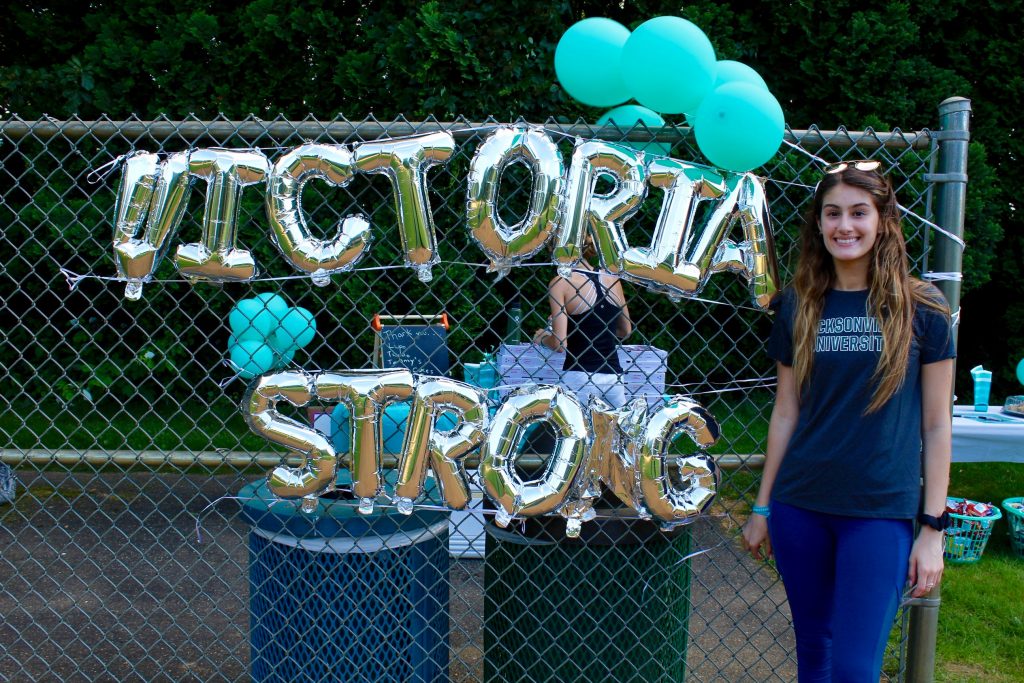 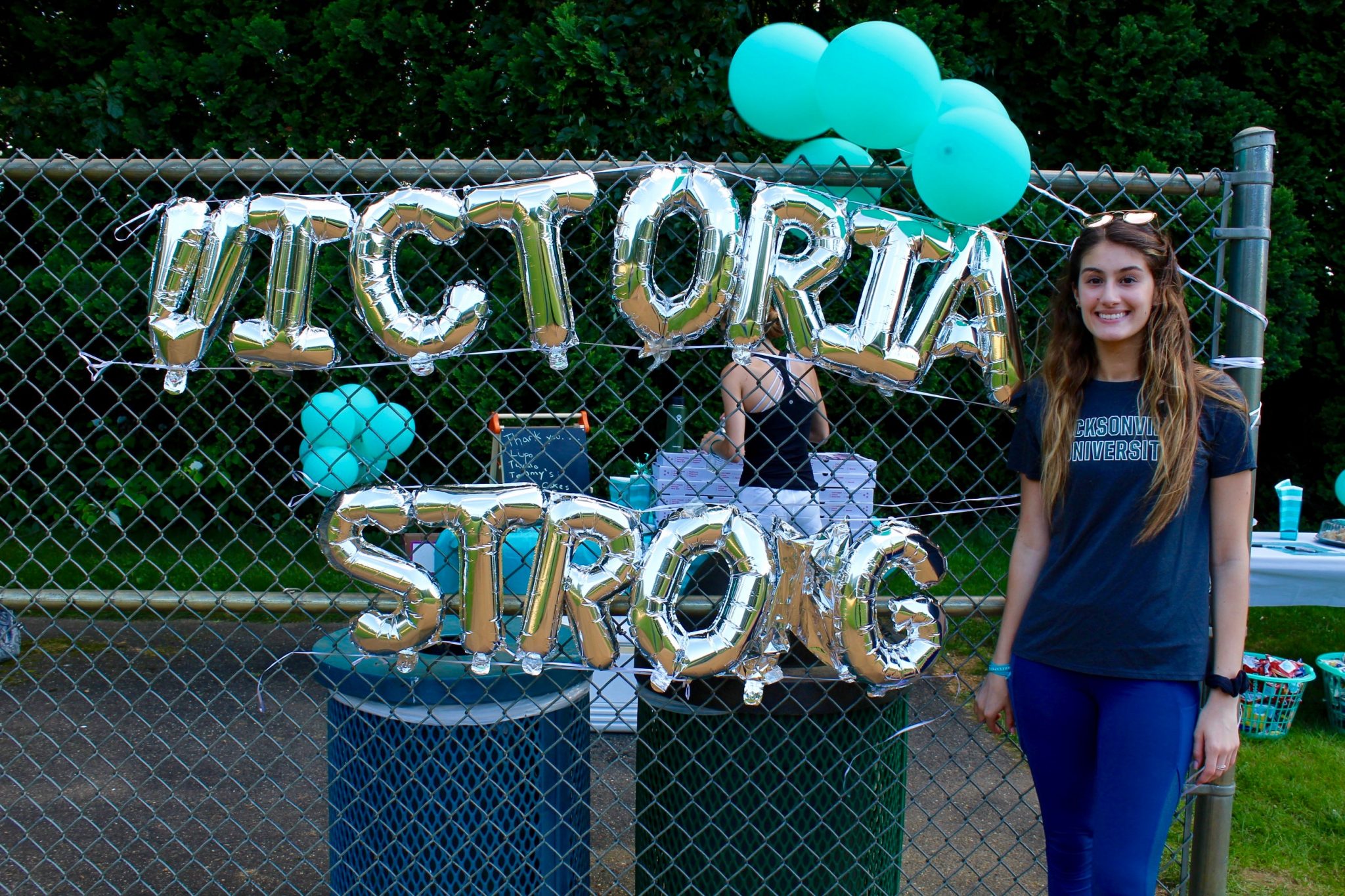 RUMSON – She knew he wouldn’t do it.

Victoria Caetano, 18, of Rumson, knew God would not put her through another spinal surgery after a surgeon shaved off portions of a benign tumor that was affecting nerves during an operation on April 15.

That is what her mother, Lily Caetano, said during an interview at a fundraiser for her daughter on June 30.

Proceeds raised that day would help to pay a $112,000 medical bill for the treatment of complications after Victoria’s surgery.

Victoria has spina bifida, a birth defect that occurs when the spine and spinal cord do not form properly. Spina bifida may cause physical and intellectual disabilities that range from mild to severe, according to the Centers for Disease Control and Prevention.

Victoria has a benign tumor on her lower spine that affects the nerves in her legs and some internal organs. She previously said the tumor is “strangled” around her nerves and spinal cord. Strangulation of the nerves affects the access points of messages to her brain and sensory areas of her body.

While Victoria was on the operating table in April, her surgeon noticed the tumor was “much worse” than he thought, according to her mother.

Caetano said the surgeon had to “sacrifice (Victoria’s) sensory nerves for (her) motor nerves,” which she said left her daughter with extreme sensitivity in her legs.

Doctors could not begin physical therapy because they could not touch Victoria – which prompted an extended hospital stay.

While Victoria recovered, Caetano said, she developed a high fever and headaches. The headaches could have been caused by the transition from intravenous narcotics to oral narcotics.

But doctors thought Victoria had meningitis – an inflammation of the membranes surrounding the brain and spinal cord. The swelling from meningitis typically triggers symptoms such as headache, fever and a stiff neck, according to mayoclinic.org

“A clot (on her spine filled with spinal fluid) when (doctors) thought she had meningitis and treated her for meningitis,” said Nancy Freeman, Caetano’s good friend. “She got an infection from the treatment of meningitis … (Doctors) just put medicine on top of medicine in her body and (Victoria) was shutting down.”

The leaking clot on Victoria’s spine now needed to be addressed, Caetano said, adding that doctors “wanted to open her back up again” if the clot did not stop leaking.

But Victoria’s faith in God was stronger than her circumstances. Caetano said her brave daughter was certain God would not make her go through the pain of another spinal surgery so quickly after the previous one.

And she was right.

When the possibility of an immediate follow-up surgery was mentioned, Caetano said, the members of two congregations, the iZion Christian Church in Marlboro, to which she formerly belonged, and Calvary Chapel Coastlands in Eatontown, to which she currently belongs, were notified through What’sApp group chats by Caetano.

“At the Brazilian church (iZion Christian Church), (a member) made a 24-hour (prayer chain) for every half-hour. It started at midnight,” she said, adding that individuals would take turns praying for Victoria every half-hour.

“For example, the pastor would pray for a half-hour. Then his wife would pray. Everyone who wanted a time (was able to participate) … There were tons of people in this group. I would send a message and everyone would see it.

“… That started on a Saturday. Monday was the (planned) surgery. The prayers went through Monday. At 7 p.m. Sunday, the nurse came in and told Victoria she could not eat anything (prior to Monday’s surgery). I put (the update) in the group app. People were like ‘no, no, no, no’ (that the surgery was still on) … The nurse came back in and said her surgery would be at 1 p.m. Monday. At that moment, your faith kind of cringes.”

The prayers did not stop. At 4 a.m. Monday, Caetano said, her daughter was in so much pain that she could not sleep. Still, her trust remained in God’s word that he would not put her through another surgery so soon after her previous surgery.

Around 9 a.m., Victoria’s clot stopped leaking. Doctors were floored, her mother said, adding that “it was a miracle.” At that point, the surgery was cancelled.

Caetano said Victoria believed the medications she was taking were “killing her.” After explaining to doctors that she felt worse taking certain medications, the doctors remained adamant that she should stick with her treatment.

“She was going to walk out (of the hospital),” Freeman said. “We were fighting with doctors all night. … Victoria said, ‘you’re killing me with what you think is supposed to be making me better.’ ”

A specialist eventually listened to and addressed Victoria’s concerns, Caetano said. She switched to an oral antibiotic instead of an IV and felt better, he mother said.

The next week, after a 35-day hospital stay, Victoria walked into her senior prom – in heels.

“She was literally dying on a Wednesday and went to prom the next Thursday,” Caetano said. She also said that the school nurse at Rumson-Fair Haven Regional High School escorted Victoria to the senior prom.

Victoria graduated from the high school on June 19. She will attend Jacksonville University in Florida in September, with plans to attend medical school. Victoria said she plans to become a pediatric neurosurgeon.

Previously, Victoria said, “I don’t see myself doing anything else. I grew up in hospitals. I grew up at doctors appointments. Being around nurses and doctors, I would explore everything. I asked to be rolled into surgeries without the medication that makes you drowsy. I wanted to see everything and look at all the equipment.

“(Spina bifida) inspired me and showed me there are people out there who don’t even know me, and they have dedicated their lives to helping me,” she said.

“I would go through everything to have her. She is a daughter I wished everyone had,” Caetano said, praising her daughter’s resilient spirit and assurance in her Christian faith.