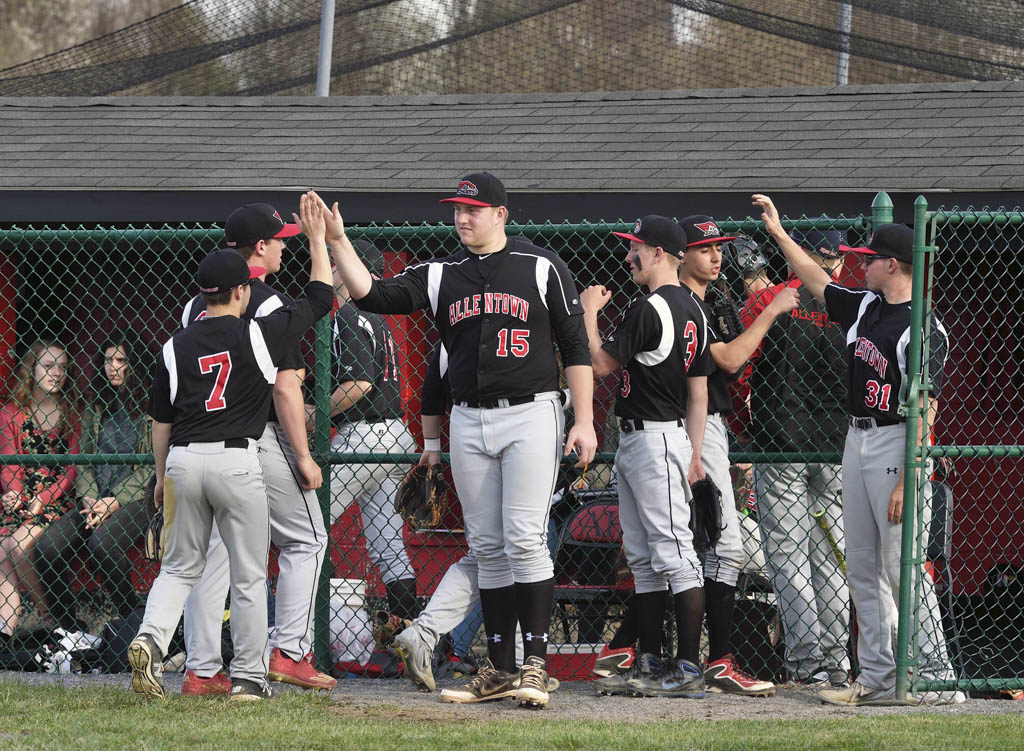 It feels like the 2019 campaign only just got going in central New Jersey. But now the regular season is already ending this week.

Allentown has won three straight games to improve to 9-8, positioning itself for a District Tournament bid. Six MCALL teams are slated to make the field, and Allentown is in sixth place in the Mercer County League’s standings.

Coach Justin Ely’s team is playing its best baseball at the right time, having outscored its last three opponents by a combined margin of 28-5. Ely said a couple weeks ago that his club just needed a fuller roster to start playing better. It appears that Ely is getting that fuller roster on a more regular basis.

As usual in recent years, Hopewell Post 339 is golden. The defending MCALL champion has won 11 straight games, holds a 17-2 record and stands in first place in the league standings.

Hopewell continues to get contributions from its entire roster. In an 8-7 victory over Bordentown Post 26 on July 10 at Hopewell Valley Central High School, Kenny Tagliareni hit a walk off single, Andy Blake stroked a bases clearing double and Marc Porpora went 3-for-3 with two doubles.

At 12-6, Lawrence is in a strong position to qualify for the District Tournament. Lawrence sits in fifth place following a two game losing streak, but the MCALL is on track to receive six bids.

Lawrence has scored six or more runs in eight of its 12 victories in 2019.

After this 1-2 stretch, South Brunswick is 7-9 and in seventh place in the MCALL standings. As it stands right now, the Monmouth Junction club would need its league to get an extra bid to the District Tournament, which happened last year for Allentown but is obviously not something you want to depend on.

South Brunswick does still have seven games remaining to make a run at securing a postseason berth.

The team has been absolutely raking of late, too. In July, West Windsor-Plainsboro is 4-3 and has scored at least nine runs in all four victories. It exploded for 13 runs in its most recent victory, a 13-12 decision over Ewing on July 10.

West Windsor-Plainsboro just has to stay hot and hope for the best.

Hightstown Post 148 is not likely to make the District Tournament field. The Hightstown Borough squad is just 5-10 and in 10th place in the MCALL, meaning it would have to leap up four spots just to earn the last MCALL bid in the district bracket.

Hightstown’s season is not over, though. The MCALL could get extra bids in a depleted senior legion landscape across New Jersey. Hightstown could also make a push in the final week.

There are five games left on the team’s schedule, and a 5-0 run might get Hightstown in. Unlikely, but not impossible.

Princeton Post 218 stands at 3-14 in MCALL play and in 11th place in the league standings. Even an undefeated run to close the regular season would probably leave Princeton a little short of qualifying for the district field.

Hillsborough is 4-6 and in fourth place in the Pyramid League standings. But only two Pyramid League squads will get into the District Tournament field, unless teams from other leagues deny their bids.

Coach Matt Mosko’s team is also 3.5 games behind the second place team in the PBL, 9-4 Clinton. So the Raiders would have to win their last five games and hope that Clinton takes a free fall.

Unfortunately, Mosko’s club does not play Clinton during that span.

Even if it doesn’t make the playoffs, Hillsborough is still getting better as the season continues, going 3-3 in its last six games after a 1-3 start.